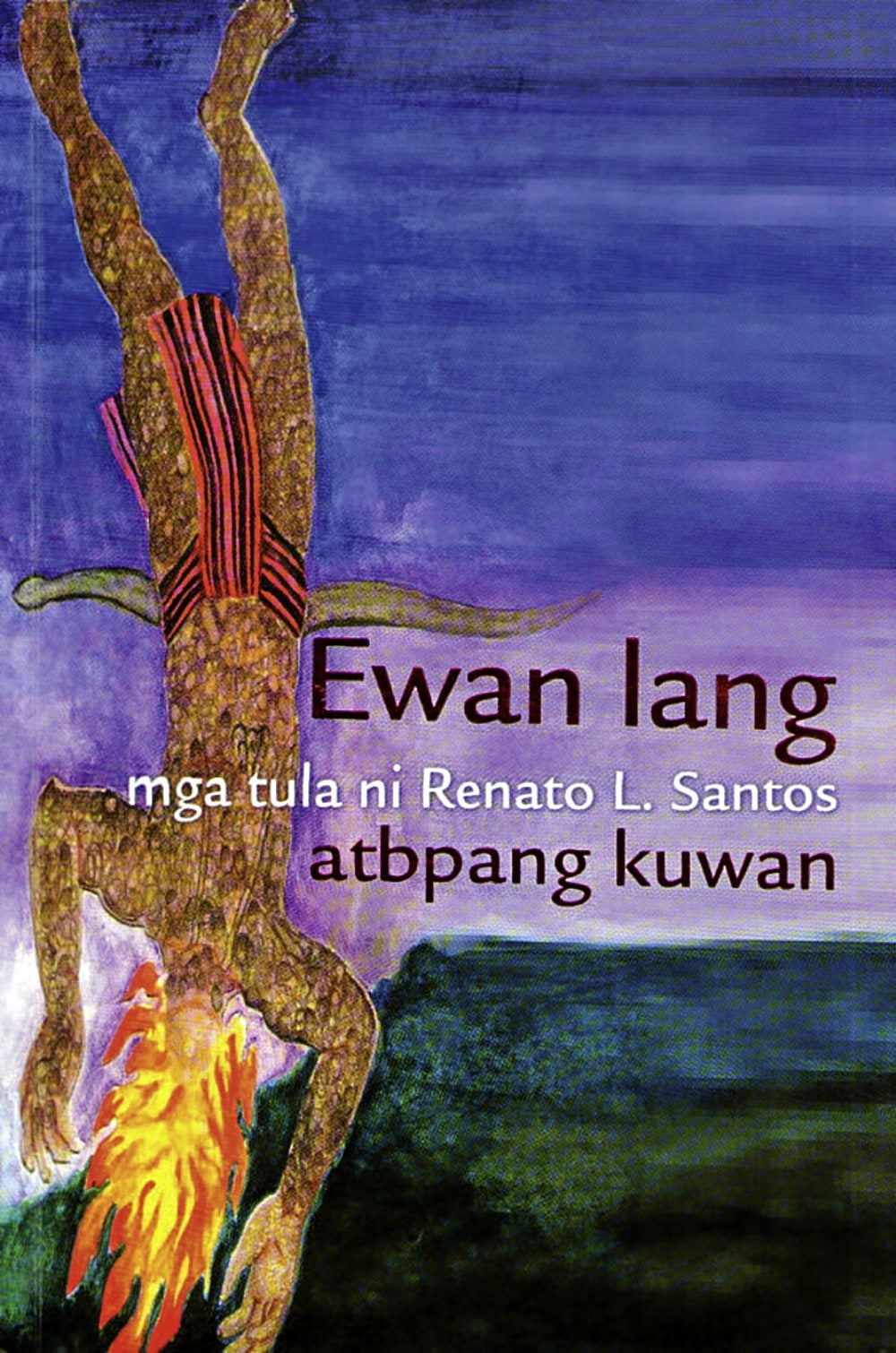 Are Jose Corazon de Jesus and Florentino Collantes turning in their graves? Is Alejandro Abadilla furious at the present state of Tagalog free verse?

National Artist for Literature Bienvenido Lumbera, whose epilogue graces the book, once wrote:

“Contemporary poetry in Tagalog is fed by three streams: traditional poetry of Aklatang Bayan and Ilaw at Panitik, rhetorical free verse and, very recently, phenomenological poetry. The influence of the first is still felt, but its practitioners and devices learned from contemporary Anglo-American poetry. The new poets represented by Pedro C. Ricarte and Rolando S. Tinio, both of them conversant with foreign literatures and showing in their poems the mark of their readings—are taking over from elder poets represented by Amado Hernandez and Alejandro Abadilla. There is no doubt a new period has begun for Tagalog poety.”

Written in the late ’60s, the statement presages what no one could have foreseen.

Lumbera’s essay “Tagalog Literature since WW II” was written in the late ’60s after the emergence of Bagay poetry, so-called because “the Bagay movement is aimed at this reconciliation between the poet and the world outside… This is the new material that Tinio brings into Tagalog poetry. The result is the invention of a new language, the renovation of the Tagalog poem itself.”

Close to half a century later, the poet Ramon L. Santos celebrates the whole physical and psychic world of the Filipino (notably that of the Metro Manila Pinoy) existing in the 21st century.

And what a deluge of poems he presents, rushing past the Taglish of Tinio into a babel of voices, incarnations, dialogues with the poet, taking us on a spirited journey through the thicket of Pinoy sensibility.

In her introduction to the book, Sylvia Mayuga, a personal friend, wrote: “Butch ranges our Philippine world like a sentry with the eye and ear of a poet in maturity. Here he versifies on Semana Santa, OFWs, condoms, malling, Smokey Mountain, traffic, Imelda Marcos and Gloria Arroyo, in a dazzling range of inner and outer rhymes alternating from classic to jazz to pop.”

The reader will not know what hit him. He is struck by a bracing, bristling Tagalog that enters a zone of extreme familiarity and yet what shock and bliss to read that a living poetry had been extracted, distilled, exalted.

The title may seem like a cipher but it perfectly captures the Pinoy’s expression of… what, indifference? Cluelessness? The catchphrase title is an all-around defense against the onslaughts of his life, a dumbstruck shrugging of the shoulders.

Indeed, way back in the 18th century, Wordsworth had been aware of “fitting to metrical arrangement a selection of real language of man in a state of vivid sensation.” It is a lesson well-learned across the seas and centuries.

Mallarme was insistent in reminding that poetry was not created with ideas but with words. Thus, the Tagalog language inexorably evolves, even mutates, into a richness heretofore unheard of, contagious with rapid-fire delivery and flamboyant exaltations.

Santos is ravenous for the musicality of our language, manic with its relentless appetite for the creative permutations of sounds in the throes of cross-pollination, punctuations of high-flown Spanish and Latin, expletives and ejaculations, by turns religious and sacrilegious, pouring out in torrents like a breathless tenor hitting the high Cs.

Readers may construe Santos’ poetry as a regeneration of Tagalog, or may lament it as irreverent bastardization. No matter. He has discarded the traditional rhyming scheme we have been habituated to expect in poetry. He has liberated verse from a constricting tradition, and nailed down the truth about ourselves.

To be sure, the poems have their own internal discipline, even as the ebullience of the language courses through our bloodstream and issues out of our very mouths. We emerge from this book dazzled and energized by an entirely new poetic experience.