Wear a rainbow on your wrist | Inquirer Lifestyle ❮ ❯ 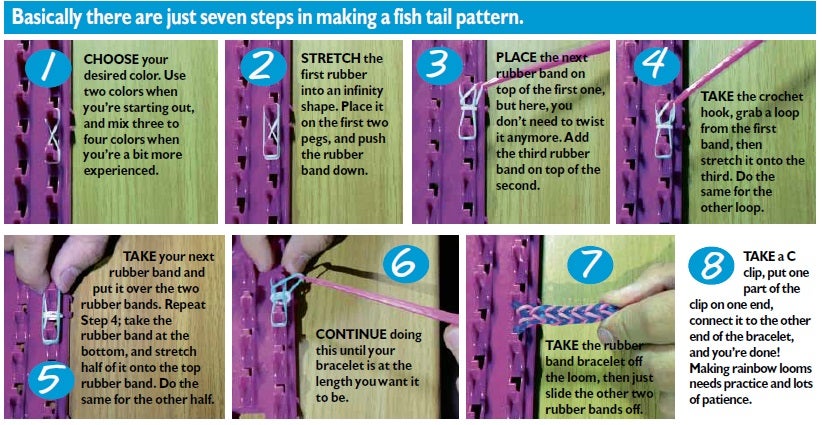 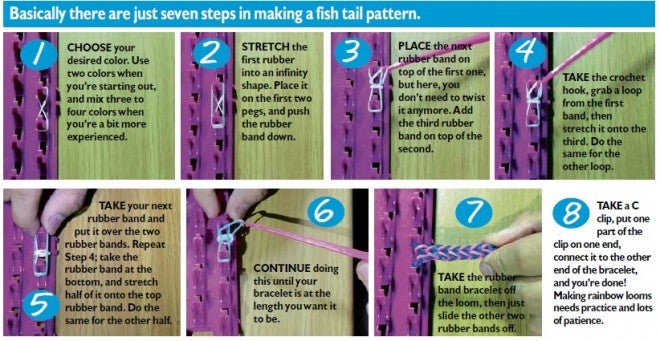 Rainbow looms! That’s what the buzz is about on most school campuses right now.

A rainbow loom is basically a plastic toy loom used to weave colorful, candy-like rubber bands into charms and bracelets. It was invented in 2011 by Cheong Choon Ng.

The loom bracelets can be made in a variety of styles, from fishtails to double-cross fishtails, using small rubber bands, crochet hook, C-shape fasteners and a pegboard.

I like making rainbow looms; I even wear them when I go to malls. Most of my summer days now are spent making looms with friends.

But why do I like making looms? To be honest, it’s very addictive, most especially when you’re into fashion accessories like bracelets. Once you’ve made your first bracelet, you want to experiment with colors and make more and more loom designs.

It gets more interesting when you’re trying to move from beginner-level bracelets to intermediate-level ones.

I started out with fishtail ones. When you get the hang of doing rainbow looms, you’ll definitely find yourself wearing two or three bracelets stacked on your wrists. It feels good to wear the bracelets, especially when they match your outfit.

They’re not just bracelets; they can also be used as friendship bracelets, a couple’s bracelet, or even something you can wear with other accessories or a watch.

The easiest rainbow loom pattern that I am sure you’ll be addicted to is the fishtail pattern. Before making rainbow looms, be sure you have the right tools and materials.