Graduation at UP Diliman not ‘the end of sunflowers’ | Inquirer Lifestyle ❮ ❯ 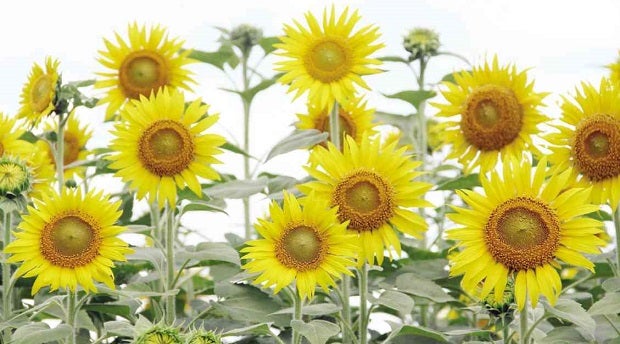 PRESERVING UP TRADITION These iconic sunflowers will blossom in June, in time for next year’s commencement exercises at the University of the Philippines, as the state university vows to protect the flowers from June showers—with an umbrella? NIÑO JESUS ORBETA

Graduation at UP Diliman not ‘the end of sunflowers’

Would sunflowers still bloom in June?

In a country where summer comes early in the year, these bright yellow blooms that are a shining reminder of the onset of summer may not find favor with the June weather.

This has become a cause for concern at the University of the Philippines (UP) Diliman, which is due to adopt an August-May academic calendar. With the shift in graduation rites, it is feared that the huge blooms may not blossom in June.

Since the late ’70s, the sunflower, which is used to depict the sun, has been a parting gift for fresh graduates. Lining on the waysides of University Avenue, the yellow blooms usher graduating students to the Amphitheater behind the Oblation for the commencement exercise in April.

But come graduation day next year, the road leading to the Oblation, the iconic symbol of UP, may not be as yellow as it used to be.

But take it from Alden Aynera, acting director of the UP Campus Maintenance Office (CMO); the iconic sunflowers will continue to grow. He said today’s graduation ceremony would not mark “the end of sunflowers.”

The climate in June may not be fair weather for the sunflowers but his team will try to save the decades-old tradition with umbrellas or by genetic modification, according to Aynera.

Aynera said that as the sunflower’s name connotes, it needs enough sunlight to grow.

Under the azure skies of summer, sunflowers come into perfect bloom. But their heads bow down when heavy rain falls.

While sunflowers may still bloom in June, the start of the rainy season, they may not be as lovely as those that bloom in April or May, Aynera said.

“Sunflowers are not resilient to rain … When the inflorescence (flowering head) of the sunflower gets soaked, it dies down,” he said.

But CMO will take on the challenge of protecting the flowers from June showers.

The low-tech method will be assigning 100 employees to cover the sunflowers with umbrellas, Aynera said. As an engineer, he said he could build a structure to shelter the flowers but that would expensive.

This year, UP shelled out P400,000 for the preparation, cultivation and maintenance of the sunflowers.

“If we put up a structure, the expenses would probably go up to millions. That’s why I am very sure that the university would not invest in that,” he said.

Aynera suggested linking with other units of the university, such as the Institute of Biology, Department of Microbiology and College of Forestry and Natural Resources in UP Los Baños to create sunflowers that are resilient to torrential rain.

A genetically modified sunflower is possible, he said.

“This is already the age of science,” he said. “With the technology, the Institute of Biology or Department of Microbiology can make the plant extremely weather-resistant.”

Aynera explained that plants, like humans, were not perfect because they are vulnerable to weather conditions.

Scientists say only microorganisms that mutate are perfect. “They change their structure to adapt to extreme heat and extreme cold,” he added.

But it would take time to genetically modify sunflowers for the UP graduation.

Emiliano Sotalbo, one of the first to plant sunflowers on UP grounds, said “there can be miracles.” It might not rain in June because of climate change, quipped Sotalbo, project development adviser of the chancellor.

But then again he said there were storms in June sometimes. “I am just glad they’ll try,” he said.

The “sunflower tradition” should be preserved, said the 72-year-old Sotalbo, who had witnessed countless graduations in UP Diliman, including the marching of his two daughters.

“Graduation won’t be the same without the sunflower,” he said. “It served as my inspiration. If they abandon tradition, I’ll be really sad.”

The “sunflower tradition” began sometime in the late ’70s and early ’80s under the late Dionisio Liwag, then head of  Campus Landscaping Office and Arboretum.

Sotalbo said he and Liwag first planted sunflowers on some parts of University Avenue.

After receiving positive feedback, they eventually planted the yellow blossoms on the rest of the 800-meter stretch of the thoroughfare in time for graduation.

“Director Liwag and I started it,” he said. “It has a special place in my heart and of course, I want the tradition to live on.”

For some graduating students, the sunflower is irreplaceable as the “graduation flower” because it carries a special meaning.

“Every community holds onto something for shared meanings and replacing sunflowers in UP means a symbol lost for the university,” said Iejo Ramos, a journalism graduating student.

Ramos related his experiences in UP with the growth of the yellow bloom, saying, “Sunflowers, in order to grow, need full sun, just as every Isko and Iska treat every experience inside the university as necessary for their individual growth.”

Enzo Regondola, who also took up journalism, said the sunflower was a metaphor of what UP students should be.

For Lawrence Agustin, a journalism major, sunflowers serve as “hope and inspiration.”

“Sunflowers are not just mere flowers for us UP students, especially to graduating ones like me,” Agustin said. “They symbolize new beginnings.”

Aynera said the sunflower, a heliotrope, moved from east to west, following the direction of the sun.

Like the flower, graduates should “look forward to a bright future,” he said.

For the sunflowers to bloom in time for the graduation in June next year, Aynera said they would adjust the planting schedule.

This year’s batch of sunflowers were planted from Feb. 22 to 24. Next year, they’ll start planting in April or May.

“Once the graduation date is announced, we count 60 to 65 days backwards,” Aynera said.

On the 45th day, around 10 percent of the sunflowers are expected to bloom and 20 percent on the 50th day.