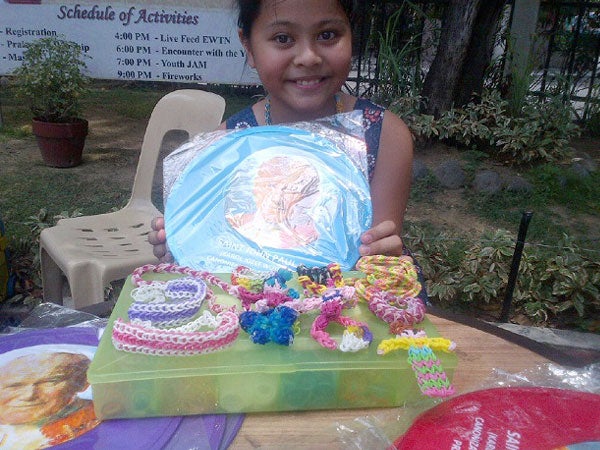 MANILA, Philippines-For most children, it’s all play this summer.

But a 10-year-old girl chooses to use her school break to earn and help those who are less fortunate.

During the celebration of the canonization of Blessed John Paul II in a parish named after him in Eastwood, Quezon City, Mallorie Cham Ocampo-Corpus, went her way to sell to devotees her personalized rainbow looms or accessories made of rubber bands and religious items inspired by Blessed John Paul II.

Corpuz said her interest in making rainbow looms started out as a hobby when she came across it in the internet.

But later, she thought of making it more than just a hobby.

(This is my hobby. But I also do this to help send the scholars to school.)

She admitted that part of the proceeds she would raise would be given to the Blessed John Paul II Parish, which is helping children of indigent families to send their kids to school.

Mallorie serves the church during religious services especially this summer when she does not attend school.

She said she still has time to play during family vacations but admitted that most of her leisure time is devoted to doing rainbow looms.

(I am happy with what I am doing. My parents are supportive with this. This is also to help the scholars of the church who cannot study.)

According to her, she knew about the Blessed Pope from stories recounted by her mom. After all, she was only one-year-old when the John Paul II died in 2005.

(My mom was present during the World Youth Day in 1995, and there she saw Pope John Paul II, who is now going to be a saint.)

The Blessed Pope visited the Philippines in January 1995 in light of the World Youth Day celebration and in February 1981 when he beatified the first Filipino saint, Saint Lorenzo Ruiz.

She said she is happy that Blessed John Paul would now become a saint.

(I am happy that he is now going to be a saint and that he can mediate for our prayers to Jesus.)

Even in her prayers, she still has in mind the welfare of others.

(I wish there will be an end to poverty, that our world will be beautiful, and that there will be no more war, because that is bad, and I wish the world to be peaceful.)

This Sunday afternoon, Blessed John Paul II will be canonized in Vatican City in Rome which will be witnessed by millions of devotees around the world.