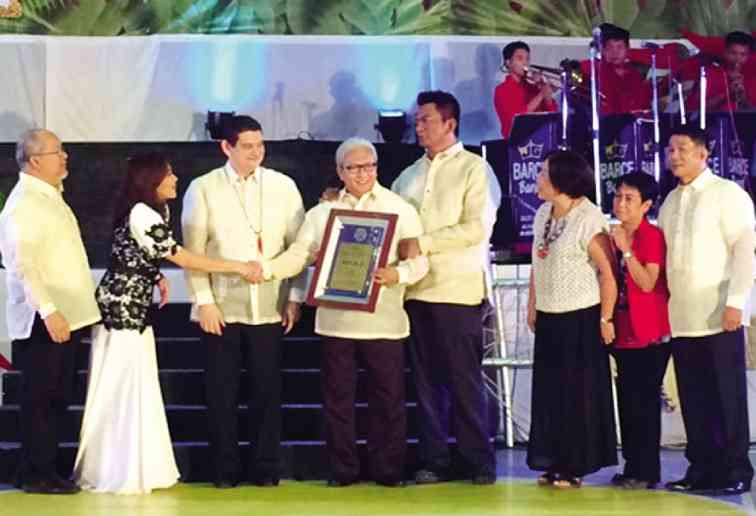 The good thing about the ongoing Daragang Magayon Festival in Albay is that it has taken notice of other cultural attractions in neighboring provinces and showcased them in one parade that showed the best of Bicol in a festival celebrating the 440th foundation year of the province.

Another noteworthy effort was the  declaration of artists as Outstanding Albayanos, and here we cheer the awards given to writer-poets Marne Kilates and Merlinda Bobis, whose body of works  are better known in national and international literary circles than in their home province.

We also note the special writer’s prize given by the National Commission for Culture and the Arts to Albayano poet Raffi Banzuela for his book “Dios Makina” which probes into the heart and soul of the Albayano through the years.

Albay Gov. Joey Salceda shas expressed time and again that his main agenda is to improve the level of appreciation for arts and culture among Albayanos, and what is genuinely unique about the folkloric arts in the province as well as in the adjoining provinces.

“We are encouraging streetdancing to showcase our inkoy-inkoy and pantomina, and the higante to remind us of the practices of our forbears before the coming of the Spaniards,” he said. “The festival has outdated the previous editions with emphasis on what we can offer our tourists—our superb cuisine, our delicacies like our pili confections, our historic ancestral houses, our fine beaches and our human resources like our top PMA graduates and our beautiful women and sturdy men who are equally challenged to show what is truly beautiful and noble about being an Albayano.”

Albay cooking is beautifully interwoven in the novel of Bobis called “Banana Heart Summer” which won several book awards. Her 2007 “Daragang Magayon Cantata,” which won the Australlian Classical Music Award  for best vocal/choral work of the year, should find a rightful place in the future edition of the festival.

The other week, the festival mounted a  music-and-dance spectacle paying tribute to Albay’s three mountains. The event is purely the effort of the province’s poet laureate  and cultural consultant Abdon M. Balde Jr.

While the event showcased original Bicol music and choreography, it is also noticeable that the works of Bicol composers like architect-musician  Everardo Napay remains unknown to the new generation of Albayanos.

Ballet thrives in private studios, notably those ran by Ballet teacher Dehlia Rebustillo, who holds dance recitals at least once or twice a year.

Some 200 years after the 1814 tragic eruption, both Mayon and the Cagsawa Ruins have become favorite tourist destinations.

To  streamline its tourism program, the province has launched a Guidebook for Albay Tourist Guides, written by Balde Jr., who also heads the province’s Historico-Cultural Group.

In Albay’s 440 years, some little known facets of the province remain, known only to a few culture vultures. In the book “War At The Time” by Clarence Lininger, the soldier-author recounted the first time Americans from Washington, DC, saw Mayon Volcano.

“What’s that?” gasped the gentleman from Washington awed by the miracle vision. “Oh, that’s Mayon,” said the other. “Most beautiful volcano in the world. Hemp all around it and well up its sides. Great possibilities, Mayon.”

“Indeed?” said the Washingtonian, who became preoccupied and distant for the rest of the trip. Upon his return to Washington, he introduced a resolution in Congress calling for an investigation into the acquisition of Philippine lands and other properties by American officials in the islands.

With the beauty of Mayon, there must have been frantic American efforts to buy all the lands around the volcano; it was pure coincidence that Mayon rhymed with the American obsession to treat the volcano as “My (their) own.”

In the same book, Lininger wrote of an opera house in Daraga, Albay, that was damaged by the Filipino-American war.

In the ’90s, it must be noted that live classical music in Albay reigned at the now defunct Albay Hotel where the country’s leading artists were personally experienced by the music lovers of Albay, among them pianists Cecile Licad, Mary Anne Espina, violinist Joseph Esmilla, cellists Willie Pasamba and Victor Michael Coo, baritone Andrew Fernando and tenor Gary del Rosario, among others.

Licad’s first Albay performance was in  1975 at St. Agnes Academy, where an arts patron, Loida Nicolas Lewis, had graduated. Lewis is all set to bring her New York production of “Noli Me Tangere” to Resorts World Manila this year.

“Mayon Volcano represents truth and beauty, and where I work, I am regularly exposed to the ugliness of lies and corruption,” he said.

Guingona congratulated this year’s awardees in the arts. Apart from Kilates and  Bobis, they included cultural worker Ramona Raneses and Ricardo Dy, who has climbed Mayon Volcano some 600 times since 1941.

The senator pointed out that artists should help restore appreciation for truth and beauty to fight the culture of lies and corruption.

“I was told that a good work of art should have symmetry, harmony and that they should be felt by the viewer. I was further told that a good work of art should go beyond symmetry and harmony and must stand for truth and should pass the test of time. I am glad Governor Salceda invited me here because I can say that your perfect cone is the greatest work of art in the whole world. You can look at it all day long and you not only feel great but it makes you appreciate the great in you. More than that, Mayon looks different every day and, in the process, you discover its various facets and expressions, which are proof enough of its authentic, timeless beauty.”

Outstanding Albayano awardee Kilates noted the irony that every artist faces every time he is honored with an award, in that the artist has to wonder whether the audience shares his quest for truth and beauty, and if the work of art is appreciated for what it is worth. In the face of such doubt, the artist is sustained by many things and can only  find redress inside his being, he said.

He closed his acceptance speech with this poem:

The heart has its home,

The only country it seeks.

It may have traveled far

But it finds its way back.

It may have suffered Fate,

But it is as poor as when it left,

And now bends its knees:

Only you, my Dearest,

Are the memory I keep;

On your shoulder I lay my head,

After everything is finished.

Here, Love, you live inside

My breast. Sailing all oceans,

I head for nowhere else.