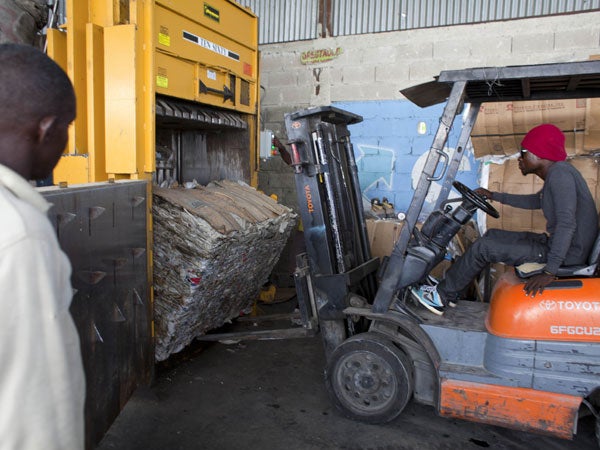 PORT-AU-PRINCE, HAITI — Haiti’s central government collects only about 40 percent of the capital’s garbage, leaving the rest to pile up in streets and gutters in impoverished neighborhoods, adding to the nation’s misery.

But now, several entrepreneurial firms have stepped in to combat both blight and poverty as Haitians learn how to recycle throwaways for cash, something people in other countries learned long ago.

With just one landfill in Port-au-Prince, the garbage can still pile up in places. But the metropolitan region of 3 million people has grown noticeably cleaner since at least four recycling companies began operating in the years after an earthquake devastated the capital in 2010.

Danisa Julien takes her recyclables to one of 26 kiosks run nationwide by a program called Ranmase Lajan, Haitian Creole for “picking up money.” It has more centers than any other recycling firm.

On a recent day, the 28-year-old woman and her 16-year-old sister dragged four big bags crammed with empty juice bottles to a roadside kiosk, one in each hand, then scooped out the plastic containers with their slender arms.

The $27 they earned is a small fortune in Haiti. Together, the sisters earn about $10 a day selling plantains and rice in Port-au-Prince, where only about 30 percent of the population has steady work.

They said the extra money would go for food, tuition and school supplies for Julien’s two children.

“If my son needs something, like food, or even a piece of paper for school, I can now do it,” the older sister said.

The bags of plastic bottles are bought for 11 to 14 cents per pound by Haiti Recycling, which cleans and shreds the plastic into a raw material for shipping to the U.S. The other companies ship their cleaned recyclables to the U.S. and elsewhere.

Johnny Atilus, who oversees the recycling kiosks, says Haitians are still struggling with the idea of rummaging through trash.

“There are a lot of people who do feel ashamed,” said Atilus, a local coordinator for Boston-based Executives Without Borders, which created the enterprise by linking Thread LLC of Pittsburgh with Haiti Recycling, a family-run metal salvaging concern.

“But you got to look at it this way,” Atilus said, “there aren’t any job opportunities down here, and this is what people do to feed and support their families.”

Why is Haiti taking so long to recover?