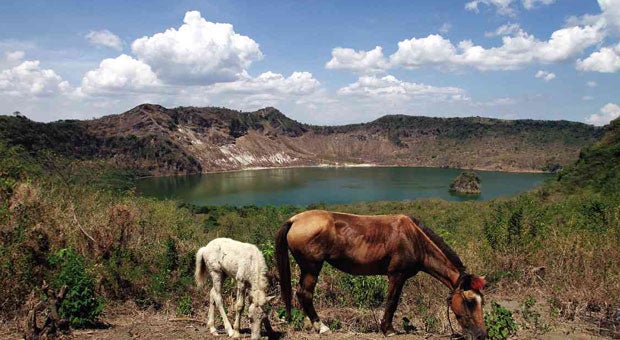 PICTURE PERFECT A mare and its foal graze in a pasture with Taal Volcano in the background. EDWIN BACASMAS

SAN NICOLAS, Batangas—An agonizingly long and back-breaking horse ride into the heart of Taal Volcano, one of the most active and potentially destructive volcanoes in the world, can be a first-class thrill, with the final descent to the main crater as the ultimate reward, unseen from the perch of comfortable view decks in Tagaytay City.

Located 50 kilometers south of Manila, Taal Volcano is accessible from this town by taking the Lipa exit of the Southern Tagalog Arterial Road. Sooner than later, there will also be at least two public vans that will bring tourists from Tagaytay in neighboring Cavite province to San Nicolas.

Since 1997 when the first horse was brought to the island by a resident, the island village of Alas-as has been offering tours on what has been called Volcano Island. Alas-as, a part of this municipality, is one of the three villages on the island located at the center of Taal Lake. The other two island villages are under the municipalities of Talisay and Balete.

Initially, tourists were not drawn to the area, recalled Jayson de Ocampo, a 30-year-old ostler and tour guide, until San Nicolas became more aggressive in promoting this poor, sleepy town as a promising tourist destination only a few years back.

The smallest town in Batangas, San Nicolas is a fifth-class municipality with annual revenues of P21 million and a population of 24,000. It relies on aquaculture, carabao raising and overseas remittances to prop up its economy.

“It was not easy at first because we did not have a start-up capital. But I’ve always believed tourism would help improve the livelihood opportunities in our town,” said San Nicolas Mayor Epifanio Sandoval.

A plus this town may have over the others (there are 12 lakeshore municipalities and cities surrounding Taal Lake) is its proximity to the volcano. San Nicolas claims to be the gateway to Taal Volcano since its mainland is about three to four kilometers away from the island. This town is also just an hour’s drive from Tagaytay, whose natural cool breeze and perfect view of Taal Volcano have become major tourist attractions.

In 2012, San Nicolas launched an ecotourism business plan approved through a local ordinance and recognized by the Protected Area and Management Bureau (PAMB) and the Department of Tourism in March this year.

“This town is now ready for ecotourism,” Sandoval said.

To shore up tourism, the municipality has designed a day tour that begins with a five-kilometer cruise on the 9.6-km-long Pansipit River to Volcano Island. The river connects Taal Lake to Balayan Bay.

Tourists may take the boat from the Riverfront area, a private subdivision being developed in Barangay (village) Calangay. A motorized boat can ferry a maximum of 11 persons (they allow a free ride for the 11th passenger if 10 seats are filled up) for P350 per head. For a group of less than 10, the boat rent is P3,500.

For larger groups, an option is to rent the municipal government’s bamboo barge or “floating restaurant” with a maximum capacity of 120 people. The ride costs P1,000 per person, as this includes lunch and musical entertainment on board, but which requires prior booking through the local government. A 50-percent discount is given to schools holding educational trips.

There is not much to expect on the 45-minute cruise to the volcano for now, although improvements are in the pipeline. According to the tourism plan, Pansipit River can provide hours of relaxation as one enjoys the scenery and native flora and fauna along the way, so it needs to be rehabilitated.

The actual thrill begins on Volcano Island. As the boat docks on the shoreline of Alas-as, flocks of white herons soar as if to welcome the guests.

Bonifacio Pangilinan, a caretaker assigned by the municipality, said it is best to go there around 8 a.m., when the birds are seen in flight. As the sun goes down by 4 p.m., the birds descend closer to the water to catch fish.

Apart from herons, kingfishers, waterfowl and wild ducks abound, although the government has yet to complete its inventory of bird species on the island.

“There are thousands of them already,” said Pangilinan. He said the influx of migratory birds was first observed sometime in 2007 after the local government banned bird hunting and began reforesting parts of the island.

The tourists may either ride a horse accompanied by a guide (P500 per person) or trek the rolling terrain of volcanic, loose soil once they reach the island. Trekkers are still required to hire a guide (P500 for the group) for safety purposes.

Marina Arakelova, 27, a Russian tourist, said she and her friends preferred the “extreme trip” of hiking, before hitting the beaches in other parts of the country.

The guide brings the tourists first to the 1965 crater, also called Mt. Tabaro, and then on to the 1911 crater, to show the large, dark-colored basaltic rocks that resulted from lava flow. Along the trail, there is a rest area where one can buy cold bottled water and soda for P30 each.

The tour takes about 45 minutes on a horse and a little longer on foot, to reach the final destination—the main crater, a 1.9-square-km, blue-green lake with a depth of about 75-80 meters.

Locals refer to it as the luwang, the Filipino word for spacious or immense. “It’s also called ‘a lake within the lake,’” said Victor Mercado, Taal Protected area superintendent. In 1996, the entire Taal Lake and Volcano Island (62,292-hectares) was declared a protected area, under the PAMB.

Some locals also offer a 20-minute boat tour in the luwang for a fee of P300/person for Filipinos and P500/person for foreigners. The fees include rent for life vests.

Local folk believe the lukewarm waters of the luwang can cure skin diseases because of its high sulfur content. Across the lake, one can see thermal vents emitting sulfur. A warning, though, for those who dare take a dip is not to wear white as the water quickly discolors the fabric.

The local government and the Philippine Institute of Volcanology and Seismology (Philvolcs), in fact, discourage people from swimming in the lake “because it’s an active volcano,” said Philvolcs volcanologist Paolo Reniva.

But some tourists are plain thrill-seekers. The Inquirer learned that during the Easter break, several tourists camped overnight around the main crater.

Volcano Island (2,475 ha) has been inhabited for decades, although it has been declared a permanent danger zone. Water is sourced from deep wells and the power supply is available only from 5 p.m.-10 p.m. Since most families own a boat, there are no regular passenger trips from the island to the mainland.

The local government said it is working closely with Phivolcs in monitoring the volcano’s activities. Tourists are strictly prohibited on the island once the alert level rises.

San Nicolas recorded 6,800 tourist arrivals on the island last year, and around 2,000 from January to March this year. “We have tourists almost every day now, especially during summer,” Sandoval said.