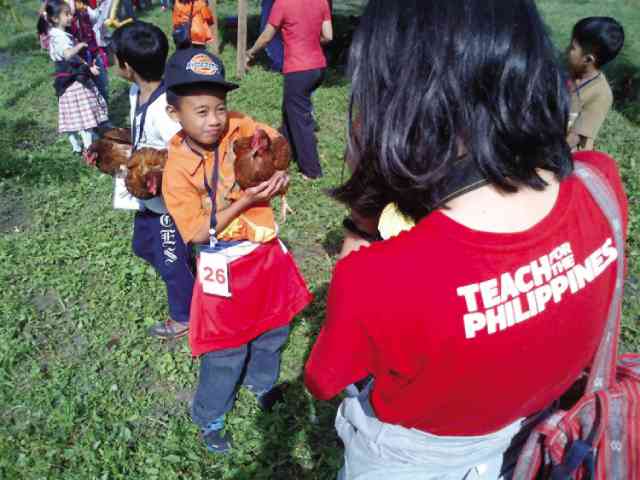 Art historian Clarissa Delgado, 30, left the careerist path overseas to help uplift the poor state of public schools in the Philippines. Likewise, Patricia Feria, 28, gave up a lucrative job in investment banking and hedge funds in the US East Coast to support the same cause of transforming people’s lives through public education.

Call them social entrepreneurs, this millennium’s version of the young activists during martial law. Both generations have sought to address problems which the government alone can’t remedy. But unlike their predecessors who adopted political activism to establish organizations that could instigate radical changes, this generation would rather undertake research to understand human behavior, to measure the situation and to channel solutions to social issues.

They’re all part of Teach for the Philippines (TFP), a partner in Teach for All, an international network of social enterprises that aim to widen and provide better learning opportunities in countries that need them.

Working with the Department of Education, Teach for the Philippines is one step up from Sa Aklat Sisikat, a program that collaborates with public schools in instilling the reading habit among students. The Poverty Action Lab of Michigan Institute of Technology conducted a research that validated the impact of Sa Aklat Sisikat in contributing to the country’s literacy rate.

But as the Philippines confronts the challenges of a changing world and a growing population, SAS felt that the way to be more effective was to innovate and to adopt a more inclusive program for the schools. Hence, Teach for the Philippines.

TFP recruits graduates and professionals who want to do their part in improving the standards of public education. The teachers are called “fellows” and are given a two-year contract with salary and benefits.

“If you think you’ve worked hard to become a leader in a management training program, imagine what you’ll learn by being in the classroom each day from 6 a.m. to 12 noon, then conducting tutorials in the afternoon,” says Feria, Teach for the Philippines’ chief of strategic resources officers.

“You spend the weekends holding remedial classes for those who don’t know how to read. You’re the only adult among the 40 kids,”

While they’re teaching, the fellows undergo 26 months of continuous learning, which includes 18 units of education for public school, leadership, community credits and an intensive summer program. Through the kindness of a supporter, the Philippine Investment Management Corporation, the University of Pangasinan in Dagupan is hosting the program. The faculty includes guest trainers from Loyola Marymount California and University of Monterey, Mexico.

In barely two years, TFP already has a roster of 53 fellows, some of whom are top honors students of universities. Others are idealistic young adults who turned down job offers from prestigious companies such as McKenzie, HSBC and Bank of the Philippine Islands to become full-time public school teachers for two years.

Says Feria, “These people can apply abroad with their credentials. But instead of being someone there, they can teach here and contribute.”

As a bonus, TFP invites guest teachers for the day. TV host Boy Abunda taught a social studies class on the different types of Filipino houses in the Philippines at the Kamuning Elementary School. He also shared that his stylish homes were the fruits of his hard work.

Sen. Paolo Benigno Aquino invited third graders to his office at the Senate and enjoyed a discussion with them on current events.

The children, who’ve never stepped out of their barangay, also had field trips to the Coca-Cola Bottling plant in Laguna and  DHL logistics hub at the Ninoy Aquino International Airport.

Delgado and Feria find great satisfaction when they’re able to work with more partner organizations and recruit fellows. They’re also happy to hear stories from fellows about how teaching has given their life purpose and how the public school children under them regained their interests in study.

Says Delgado, TFP’s chief operating officer: “Our kids and our schools mean that much to the future of this country.”

Both women have come to learn that the spirit of social enterprise is through collaboration—helping people work together and influencing their pathways.

“I grew up hearing this adage that it takes a village to raise a child,” says Feria. “More than ever, it’s easy to get lost in the belief that you can be independent or you’re conditioned to find a job and figure out how to support yourself. My experience here has taught me that to get things right, I need to work with other people. No one person or organization can save the world on its own.”

“When you’re young, you think ‘I can do it my way’,” adds Delgado. “As you get older, you realize ‘I’m good at this and not so good at this’ and together we can create something even better. You lose the hubris of youth and channel your energies toward bringing people together. That’s what we’ve learned. I call it maturity.”