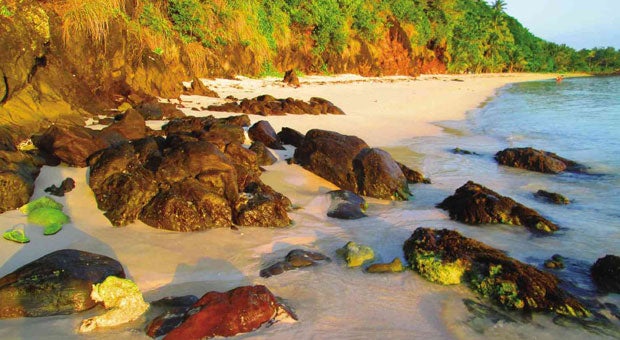 PRETTY IN PINK Tucked away along the remote coast of Northern Samar province is the Pink Beach of Sila Island. Its pink, powdery sand makes it one of only two pink beaches in the country. Its color comes from the mixture of fragments from red corals and shells pulverized by waves over thousands of years and washed ashore to mix with the original white sand grains. Sheltered by a reddish rock wall, Pink Beach assumes shades of red or salmon when the sun is at its hottest. CONTRIBUTED PHOTO/Quirino Denzel Real Pajares

SILA ISLAND, Philippines—One of the prettiest beaches in the Philippines is tucked along the coast of Northern Samar province, away from prying eyes, nosy and noisy beach bums, and greedy tourist trap operators.

The pink, powdery sand beach is surrounded by sparkling waters that alternately turn emerald green and turquoise. Coconut trees swaying in the gentle breeze dot the seashore. Black rocks and unusual stone formations separate the pink beach from its neighbor, a privately owned beach of white but not-as-fine sand.

There is only one other beach covered with pink sand—albeit more famous—in the country, and it is found on Great Santa Cruz Island in Zamboanga City.

Located on the eastern side of the island village of Sila in San Vicente town, Northern Samar, Pink Beach is a 92-meter-long and 8-meter-wide stretch that has been attracting tourists all year-round, especially during summer when the sand’s pinkish hue is more evident.

“When  it is exposed to the sun, the sand is tinted in shades of red or salmon. The best time to be in Pink Beach is during summer when the sun is up,” said San Vicente Mayor Tito M. Luñeza.

Luñeza is one of the owners of the property that sits on a 4-hectare coconut plantation, which he and his siblings inherited from their parents.

Last April, the Luñezas built one bamboo kiosk and two toilets for Pink Beach visitors. “Maybe we will build two more kiosks because many people have been coming over. We have no accommodations yet but we have allowed campers to pitch their tents, as long as they help clean the area before they leave,” he said.

The beach is sheltered by a rock wall with a reddish hue that separates it from the main village of Sila where about 250 families reside, most of them former natives of Cebu province. Although Cebuano is the dominant language spoken, there are a few settlers who speak Waray.

One has to climb a narrow pathway and walk another 30 minutes to reach the other side of the island. Another way is to take a boat to the main village.

Corazon Lañuza, the mayor’s cousin and caretaker of the beach, said the color of the sand has always been pink, even when she was a little girl.

The color comes from a mixture of fragments from red-colored corals and “foraminifera”— tiny sea creatures with red shells that are washed ashore during the “habagat” (southwest monsoon) season.

With the passage of time, the corals and the red shells are pulverized by the waves and other elements, and mix with the original white sand grains, resulting in the sand’s pink color.

San Vicente is an island town composed of seven islands of the Naranjo Island Group, with a population of 7,447, according to the 2010 census. A sixth class municipality (annual income less than P15 million), it used to be part of nearby island-town of Capul. San Vicente used to be called Barrio Mongolbongol (Destacado Island) of Capul until it became a town on June 18, 1966, by virtue of Republic Act No. 4761.

The town got its new name from its patron saint, St. Vincent de Ferrer. Its seat of government is in the island of Destacado.

Well worth the long trip

Fishing is the main source of livelihood, although many residents also earn from copra because coconuts are abundant in San Vicente.

It is not easy to go to the island from Tacloban City, Leyte province, but the trip is well worth the trouble.

The four-and-a-half-hour drive to Calbayog City from Tacloban on board a van-for-hire will cost the passenger P250 per person. From Calbayog, you need to take another van that will take you to San Isidro town in Northern Samar, the jump-off point to San Vicente.

There is only one boat plying the San Isidro-San Vicente route that leaves at 2 p.m. daily except on Sunday, which is a rest day for many of its residents.

The boat leaves the pier in San Vicente at 7 a.m. daily, with the fare  pegged at P100 per passenger. Tourists, however, can rent the entire boat at the rate of P7,000 to P9,000 for a one-way trip. But there is no motorboat that sails directly to Sila Island because tourists have not come on a regular basis.

The travel time from San Isidro to Pink Beach is 45 minutes. There are, however, boatmen willing to bring tourists on motorized boats at P5,000 for a two-way trip.

Since there are no stores on Pink Beach, hungry visitors have to go to nearby Ternate village for its wide variety of seafood—from fish and squid to crayfish, which is sold at P1,200 per kilogram, a bargain compared to the P3,000 to 5,000 per kg available in most restaurants.

Even if going to Pink Beach can be a challenge, a growing number who have learned of its fabled pink sand have taken the dare and shown up, ready for adventure.

Who could blame them from coming over?

Apart from the pink sand, the sight of flying fish welcoming the visitors would be hard to resist. And the colorful reefs are a feast for the eyes.

There is no entrance fee but anyone can donate their extra pesos to the caretakers who clean up the beach after the visitors have gone.

Although there are no available recreational facilities, there are a number of activities one can do: meditate, walk around, get a tan or swim to your heart’s content. Snorkeling or scuba diving are must to-dos. You can collect shells but be sure not to bring any of that precious pink sand home. A reminder written on a huge rock on the beach warns visitors:  “Gui Dili pag Kuha ug Baras (Not allowed to take Pink Sand).”

Despite its potential, the Department of Tourism (DOT) has not gone full swing promoting Pink Beach since it is not yet ready to accept the influx of visitors, said Karen Tiopes, DOT director for Eastern Visayas.

She pointed out that the town and Pink Beach lack facilities and accommodations, although there are several homes in San Isidro that accept tourists at a friendly rate of P150 per person.

The Luñezas also want to sell Pink Beach, admitting that they don’t have the capital to develop the property. “There are many takers, mostly diving resort owners, but we cannot agree on the price,” said Mayor Luñeza.

Kookai Sultan,  officer of the Department of the Interior and Local Government assigned in San Vicente, said the agency had approved two fish and marine sanctuaries in San Vicente under the Bottoms-up Budgeting program. One is near the pier of the poblacion up to the Pasil islet. Another will be set up between Pink Beach and nearby Panganoron Island.

Sultan said that once these sanctuaries are in place, the mayor might have second thoughts about selling the property because these are tourist come-ons that can also increase fish production in the area.

But for its awesome pink sand feature alone, without a doubt, Sila Island’s Pink Beach is definitely a crowd-drawer.

Why the Philippines is the place to be this summer

How about a rice terraces mountain adventure?