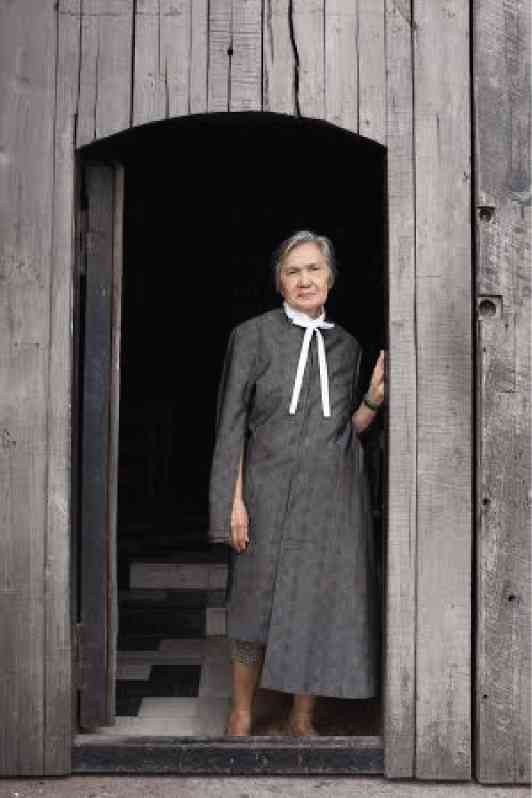 They are neither model-tall nor thin, but when a middle-age corn vendor, two embroiderers, a farmer tending her rice paddy, an art teacher, and other everyday people were approached by photographer Jay Yao and asked to pose for pictures sporting couture by Filipino designers Joey Samson and Lesley Mobo, everyone was game to do it.

Perhaps the thought of wearing outfits made by one of their own was reason enough for these random folks and relatives of the designers to accede.   Shot in key areas around Samson’s province of Cavite, and in Kalibo, Aklan, where Mobo is originally from, the large-scale portraits of Yao’s exhibit, “Homecoming,” are “less about fashion and more about going back, of me interpreting these designers’ memories of their hometowns,” explains the boyish and blonde Yao.

Surveying his 14 life-size works propped on the floor of the Greenbelt 5 boutique Celestina, where they were recently on display, he points to Carina de la Cruz, a corn vendor standing on a rickety wooden bridge leading to Samson’s house.

Accessorizing her crisp white dress shirt by Samson with her fanny pack and umbrella cap, De la Cruz plies that precarious bridge daily, and in fact knows the designer’s mother. Incidentally, it is a portrait of Ligaya Samson in a long, gray asymmetrical dress poised on the doorway of a centuries-old church that visitors first see when they enter the exhibit area.

Marylyn Veluz, one of two bordadoras who worked with Samson in his early years, wears a similar dress in her picture shot amid tricycles and sari-sari stores.

Empowering at times, the designer’s clothes are also a striking contrast to the lives of the people who wear them. In a long-sleeve white shirt and pleated skirt by Samson, 12-year-old Margielyn del Rosario poses proudly with her badminton racket inside St. Mary Magdalene Church.

Ferrying schoolchildren on his banca amid squalid conditions, Greg Solania appears overdressed in Samson’s tailored pieces, as do out-of-school siblings Eduardo and Mark Anthony Sacarez. “They’re fisherfolk, which is kind of sad because they should be in school,” says Yao of the boys with a shrug. “Harsh realities, I guess.”

Meanwhile, Aklan’s idyllic outdoors served as the perfect complement to Mobo’s ethereal apparel. A shot of 15-year-old Johnlee Pilapil swathed in a cloud of white cloth as he sits on a rock by the seaside is a recreation of Lesley’s own childhood portrait, playing with fabric while perched on the same spot.

Standing on a walkway by a mangrove that Mobo frequented as a boy, Em Melody Guanco, the 16-year-old daughter of Mobo’s family driver, is a vision in a long and layered teal-colored dress by the designer. And Sumra de la Cruz Rojo, curator of Aklan’s museum and Mobo’s art teacher, appears in deep reverie as she poses in a flowing white gown, checker sash on hand, with the clear blue sky and Philippine flag behind her. “The sun was on her face so she closed her eyes for a second,” explains Yao. “If you’re patient enough, things happen.”

Indeed. Though they appear carefully planned out, these portraits (which were done in collaboration with stylist Noel Manapat and makeup artist Xeng Zulueta) were largely spontaneous, captured in natural light, and for no more than 15 minutes each.

A Fujifilm X100S, a small digital camera with a retro-designed body and fixed lens, was Yao’s instrument of choice, given its ability to yield sharp, crystal-clear images. “It’s about looking for the right micro-expressions,” sums up Yao of his shooting style.

With the accessibility of cameras these days, either through our smartphones or the more affordable range of digital cameras in the market, Yao is all for the “democratization” of photography. “I think it’s great,” he says. “It’s the same with painting. Everybody has access to brushes and pencils. But at the end of the day, an artist is an artist.”

Born in Vancouver, Canada, this artist would discover his talent for photography in the Philippines after he received his first camera, a Canon SLR, given to him by his stepmother when he was 16. Upon the encouragement of his uncle, fine art and stock photographer Stuart Dee, the self-taught Yao mastered shooting colored slides first, to gain control over his exposures.

He then learned how to print his own black-and-white photos, reading about techniques in books and using the darkroom in his high school to process his earliest images.

Through one of his first exhibits at Hiraya Art Gallery, he would meet people who opened doors to the glamorous world of fashion photography. Yao, whose debut glossy magazine assignment was “shooting Joey Mead and the top 10 fashion designers,” would eventually take his services to modeling agencies in New York. There, he photographed young teenage girls eager to make a good impression through their portfolios.

It was also in New York that Yao, José Campos III in real life, decided to go by his family’s Chinese name, “because every time people met me, they always thought I’d be Latino,” he says with a chuckle.

When his interest in fashion photography waned, Yao proved his versatility in a variety of subject matter, tackling landscapes, cityscapes, everyday objects, and people in his fine art exhibits and personal projects.

Photography, of course, remains his true love, and now that he’s been back in the Philippines for a year and counting, Yao finds himself reveling in his own homecoming. “If you talked to a younger version of me, I don’t think I would have said that I wanted to live in the Philippines,” he admits. “But it’s great here: There’s a vibrant art scene and lots of exciting work.

“The time is now,” he declares. “The Philippines is flourishing, and I just love the energy and the chaos that is Manila. It’s always going to be my home.”

On top of his to-do list? Collaborate with other designers for a series of “Homecoming” exhibits. “It’s great as a project,” he enthuses, “because I get to see more of what’s outside of Manila. It’s exciting.”