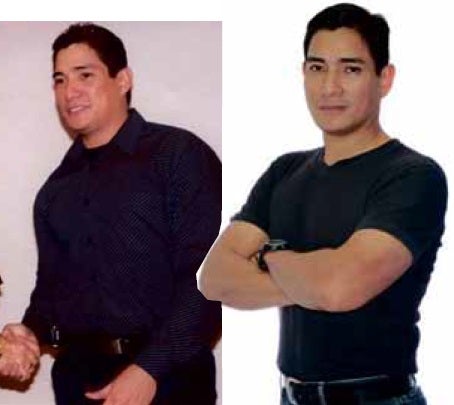 THE AUTHOR, before and after

9 tips to shrink your daddy belly

Close to 50 years old, I  found myself overweight and with hypertension. Happily, I have been able to lose some extra inches and get my blood pressure back to normal. It is possible to restore one’s health if one has a plan and sticks to it.

I started gaining extra weight after I got married in my late 20s. Just before that, I was quite a physical specimen of fitness. But I was actually underweight as a teen. I ate more than my fat classmates and was still scrawny.

Then I studied nutrition and physical fitness. I developed a bigger, stronger body not by gaining fat but through building muscle.

Soon I was working as a fitness instructor and devised weight management programs for other people. This opened doors for me—I became a professional model and then a movie actor.

My physique got me frequently cast as a body parts model and put in bed scenes with the sexy screen goddesses of the time.

But I let my fitness slide when I got married. This happens to lots of newly married men, who suddenly have new responsibilities and changed routines. Which lead to less exercise, if not stopping it altogether. Worse, married men eat more than they used to.

Studies show that a person tends to consume bigger quantities of food when they eat with a partner or group of people. When you’re with your spouse, you have a regular eating club.

When your wife gets pregnant, you join her for the many meals and snacks (to be supportive, you say). You finish the leftovers of her cravings, so as not to waste it (of course)!

Soon, you both gain weight. She is pregnant, but what is your excuse?

I gained so much weight during my wife’s pregnancy with our first child. Friends exclaimed, “Ano’ng nangyari sa iyo? Mukha kang tatay!”

We all laughed, but the fact was that my body had changed. I never thought I would ever get the “daddy look.”

There is a period of denial when we gain weight. We tell ourselves that it is just a slight gain and eventually stop measuring our weight.

When people ask what our present weight is, we usually state a figure that is 20 or more pounds less than it really is.

I realized that two years had passed since I last weighed myself. Stepping on a scale, I was shocked to see that, in two years’ time, I had gained 50 pounds! That is like gaining two pounds a month! Quickly, my in-denial brain consoled me with the thought that the scale was faulty.

Reality hit me when I was asked to model in a fashion show with others of my batch. We were modeling different barong Tagalog outfits. These are supposed to be comfortably loose, but on me it felt like a body-fit.

The zipper on the slacks would not close despite my almost passing out from exhaling to suck in my gut! My saving grace was that the barong was not made of see-through material, so the unfastened waist of my slacks was hidden from the audience.

I soon noticed other changes in my body. I would be short of breath and fatigue quickly. I had pain in my knees and lower back. My blood pressure was high.

I knew I had to do something about this before it got worse. I went back to the basics of eating wisely and exercising as my personal makeover plan.

I believe that weight management does not have to be as painful as some people make it out to be. So, I followed a simple schedule of regular eating times with sensible exercise. Here are some points on the plan that I used:

1. Always have breakfast. I ate my first meal an hour after waking up to activate my metabolism.

2. Eat five to six small meals in a day. I ate smaller sized meals every three hours. Sometimes the lesser amount made me hungry in three hours, which was just in time for my next meal.

3. Portion control. Main meals (breakfast, lunch and dinner) were roughly the size of my two palms (without the fingers). Snacks were one palm size and eaten in between meals and after dinner (if needed).

4. Adequate protein. The average man needs roughly 50 to 80 grams of protein daily. Teens and athletes need more. Protein controls hunger. I had some protein (animal or vegetable) in each meal. (Guide: One chicken drumstick is about 12 grams of protein; an egg is around six grams.)

5. Control carbohydrate intake. We need carbohydrates but not too much (endurance athletes benefit from large intake of carbs, but the rest of us don’t need that much). Updated fitness magazines, shows and Internet sites advise controlling carbohydrate intake to lose fat. I only ate 1/3 cup of rice or 1 piece of bread at main meals. No carbohydrate snacks.

6. Eat on time. I ate meals three hours or less apart. Experts say this regular feeding schedule speeds up your metabolism and encourages your body to burn fat.

7. Drink plenty of water. Our body is more than 80 percent water. Digestion and getting rid of waste need water.

8. Moderate exercise three or more times a week. Our bodies were built to move around. For decades, experts have said you need to exercise to burn fat. I started by brisk-walking on the treadmill for 15 minutes three times a week.

Start on a slow walk and increase the speed over five minutes. It has to be at a pace that challenges you more than normal walking at the mall. The guide is that you should be walking fast but still able to converse with other people in short sentences.

Improvements in treadmill fitness are quite fast. The next week I worked up to 30 minutes brisk-walking on the machine. By the third week I was slow jogging.

Now I’ve added a basic resistance workout with weights two to three times a week because you need toned muscle to burn fat.

9. Drink nutritional shakes. These are convenient for sticking to an eating schedule. They allow you to feed your body while controlling the intake of calories, fat, carbohydrates, etc. They also boost your vitamin and mineral allowances. They function as meals or snacks in place of solid food meals.

People noticed that my daddy belly began to shrink after just a couple of weeks. In one month I was wearing my old jeans again. I lost my budding double chin and more than three inches off my waist. The body aches and pains were gone.

I felt confident to go to the beach, but we went to Sagada instead! At least I know that I can trek up those slopes!