Pinoy Otaku Festival 2014: Fantasm, First ever event with cosplay for a cause | Inquirer Lifestyle ❮ ❯ 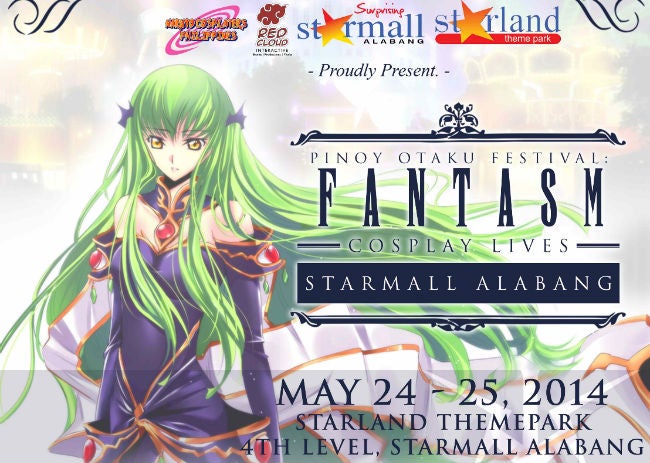 Pinoy Otaku Festival 2014: Fantasm, First ever event with cosplay for a cause 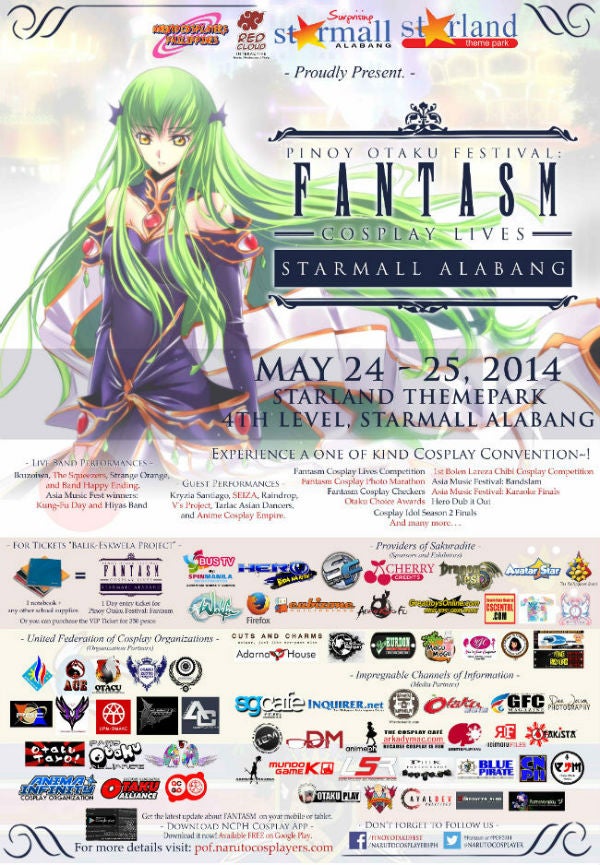 MANILA, Philippines—“All Hail Britannia!”  The famous line from the anime Code Geass will come into life as Naruto Cosplayers PH (NCPH) and Red Cloud Interactive officially launched the final countdown to the first ever live action role-play event with cosplay for a cause in the Philippines.

The initial launching was at Sci-Fi Café at Robinsons Galleria, Ortigas. The venue of the launch was very symbolic since Sci-Fi Café is the only restaurant of its kind in a country where you can enjoy being a toy collector, a cosplayer, and most importantly have a great and unique experience which is the same thing Fantasm wants to bring to every conger.

Fantasm will be on May 24-25 at Starland Theme Park, 4th Level, Starmall Alabang.  Britannia from the anime Code Geass will be brought to life through cosplay, the castle setting and also mass participation as everyone will be issued a Britannian ID. You will be identified as Elevents, Honorary Britannian, Britannian or Britannian Royalty. Also, the event is becoming the biggest gathering of Otaku related organizations in the country with groups from Manila, Laguna, Cavite, Bulacan, Tarlac and Bicol joining in.

The event is FREE ADMISSION just bring one notebook and other school supplies like ballpen, pencil, etc. upon entering the venue. You will be given a designated Britannian ID afterwards.

“We aim to bring a new kind of event.  Although this is experimental we hope that everyone will have a unique experience and cosplayers will be treated as their characters,” says Lie Pagtalunan, President of NCPH.

Hero TV will be having a free dubbers’ workshop for everyone on May 24 entitled, “HERO Dub It Out. The Filipino audience and fans will also for the first time know in person dubbers of their favorite Hero TV shows as they present them on stage with voice samples.

Fantasm will be a gathering of organizations as well, with an aim to unite the community under a cause of helping one another and the society. Among the partner organizations are Anime Corner Group Pilipinas, nime United Council, Aishiteru Anime, Anime Cosplay Empire,  Antipolo Cosplayers, Anime Cosplay Colors PH, Anima Infinity, Extreme Generation Otaku Alliance, Heroes Are Us PH, Original Tarlac Cosplayers Unlimited, Otaku Zutto, Otaku Tayo, PATTS Otaku Alliance, Philippine Gaming Cosplayers, Subsonic Forge, and UP Manila-OMAKE.

For more information about Pinoy Otaku Festival 2014: FANTASM you can check on the following:

Naruto Cosplayers PH (NCPH) is one of the largest cosplay and Japanese culture based organization in the Philippines with background in events organizing and cosplay for a cause/charity works.  The organization was featured several times in mainstream media and new media for its various activities.  The organization is founded on October 10, 2010 which is the birthday of the anime character Uzumaki Naruto.