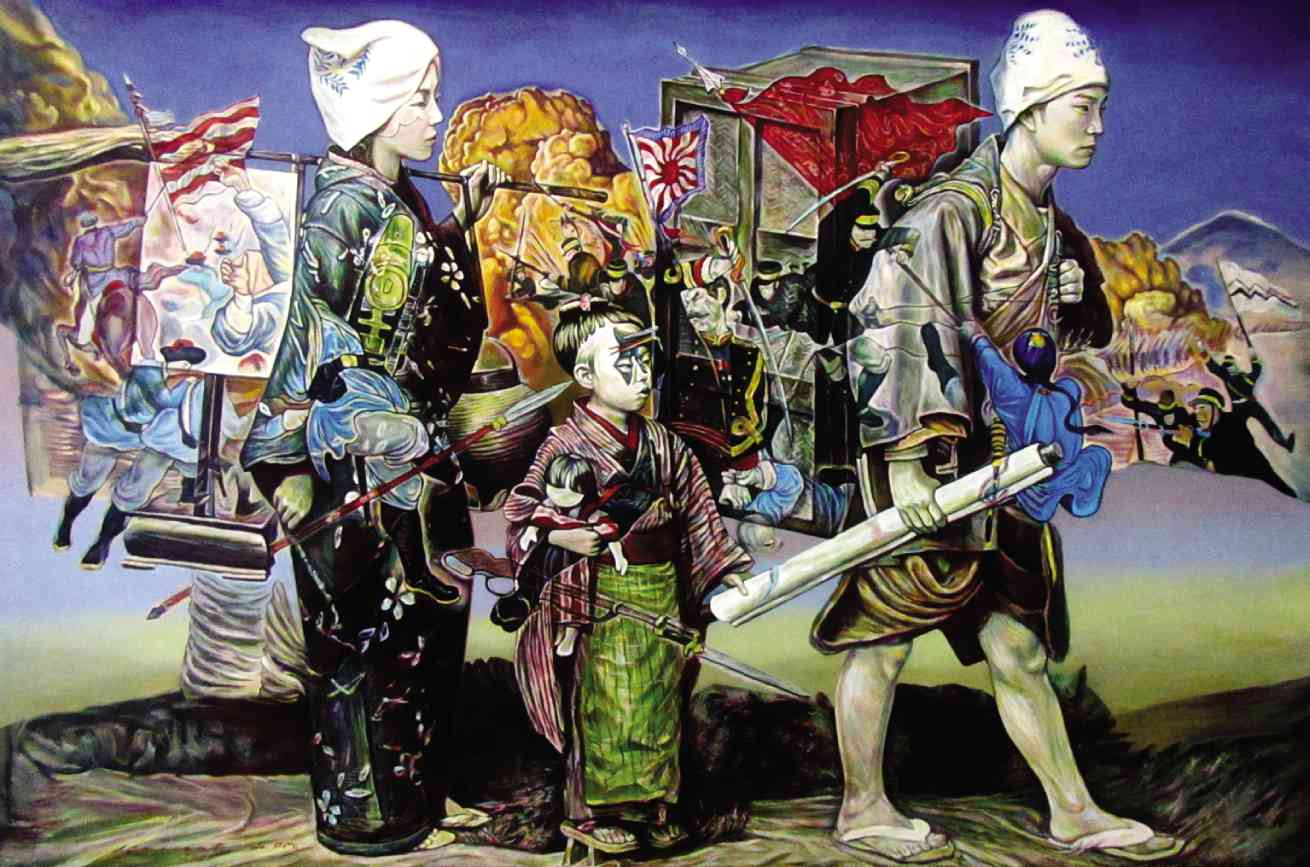 “THE SEARCH for Home”

From manga to animé, from Yakult to Yan Yan snacks, from Doraemon to Hello Kitty, Japan exerts a strong influence on the Filipino psyche.

That the Japanese have played an aggressive role during World War II also makes it challenging to reconcile their dual nature as the nation of Astro Boy and naval warships—of geishas, the kamikaze and the dreaded Kempetai.

This compelling cocktail of history and pop culture is the foundation of Vincent de Pio’s recent work. Through this examination of the Japanese social milieu, the artist attempts to explain the many supposed quirks and nuances of Japanese culture, and tackles the challenge of reconciling the disparate ideas of Japanese society—the blending of the ancient and the modern, for instance. Or the interactions of Eastern Zen and Western philosophy.

These interludes are ripe for artistic exploration. And it is a concept that De Pio, son of   portraitist Gig de Pio, has wrestled with before.

Now, he uses his own surreal interactions with Japanese culture and history for his latest exhibition, “The Art of Making Sushi,” which will open at  Art Underground on Shaw Boulevard in Mandaluyong City.

A product of the College of Fine Arts of  University of the Philippines, De Pio is one of the most sought-after artists of his generation. Having been included in numerous prestigious auctions abroad—including those in Hong Kong and Singapore—De Pio was originally captivated by painting classical women cellists in  pursuit of their craft.

But he soon branched out and pioneered the use of Japanese historical and pop imagery—starting with an exploration of the role of the  geisha. From this initial push, De Pio dug deeper and became interested in other aspects of Japanese culture such as  noblemen and ladies and, inevitably, the world of the samurai. This culminated in a critically lauded exhibition dubbed “Banzai!” at Galerie Joaquin in 2013.

De Pio continues his examination of the inherent contradictions of Japanese culture—with a marked emphasis on its quirks.

The titular piece “The Art of Making Sushi” is a fitting example. Here, we see a chef wrestling with an octopus in a style very similar to Yakuza tattoos. This mighty struggle is flanked by various pieces of sushi against a sky-blue background, indicating the eventual fate of raw materials like the octopus.

The work exhibits De Pio’s shokunin-like grasp of  subject matter and the conceptual underpinnings of his examination.

As if to underscore the notion of transience, there is a small animé-style Philippine tarsier in a kimono waiting on the horizon, anticipating the coming meal.

It is a playful work on the outset, but is nonetheless layered in deeper meanings of a Filipino’s exposure to aspects of Japanese culture, including its cuisine.

The notion of Japanese identity—especially within the context of the Meiji period and the nation’s opening to the West—is tackled in “The Search for Home.”

We see a typical Japanese family with their belongings on their back as if on some sort of journey, Surrealist elements of scenes of the nation’s experience in opening themselves up to the West—such as US Commodore Perry’s arrival at Yokohama—and the subsequent confusion and tension it wrought are depicted in surreal hazes that blend in seamlessly with the main subjects.

The allegory of transition is undeniable, and its powerful message is brilliantly captured  through De Pio’s nimble skill. But it is ultimately an autobiographical story of the artist’s own struggles to find stability in the home.

Indeed, De Pio is at his best when working with these messages and capturing the very essence of wabi-sabi in his works. A thought-provoking setting combined with an immeasurable talent in Manila’s newest contemporary art space.

In “The Art of Making Sushi,” De Pio goes deeper into the conceptual aspects of this approach, which ties in with the vision of Art Underground to showcase the best of Philippine contemporary visual arts. The show opens on May 24, 6 p.m., and runs until June 4.