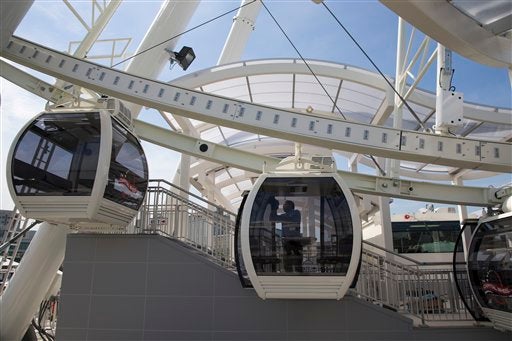 This photo taken May 20, 2014 shows a construction crew putting the finishing touches on the "Capital Wheel" at National Harbor in Oxon Hill, Md. With a massive new Ferris wheel overlooking the nation’s capital, a children’s museum, a village of restaurants and hotels and a major casino resort on the horizon, National Harbor in Maryland has quickly become a travel alternative to the marble monuments and museums of nearby Washington. AP

National Harbor aims to be ‘fun’ alternative to DC

OXON HILL, Maryland— While visitors to the nation’s capital usually head to the monuments and museums, a new attraction uses the Potomac River to draw visitors downstream to a growing destination in Maryland.

A mini-city called National Harbor has risen over the past eight years on a long-empty site. The village of shops, hotels, restaurants and public art was built between the river and the East Coast artery of Interstate 95. Its features are inspired, in part, by those of great cities, such as Rome’s Spanish Steps and Barcelona’s pedestrian mall La Rambla.

Water taxis ferry visitors to the National Mall, historic Alexandria, Virginia, and Washington Nationals baseball games. In the evening, families can stroll by boutiques or a ride a carousel. Boaters can dock for dinner, choosing from more than 30 restaurants. Everything is neat and new, and none of it existed a decade ago.

The newest attraction is opening in time for summer: a 180-foot (54-meter) Ferris wheel built over the water, inspired by similar wheels in London and Paris. The $15 million Capital Wheel features views of Washington in the distance, as well as the river. Its 42 air-conditioned gondolas hold a total of 332 people.

“You show a child three monuments, four statues and a garden, and they say, ‘I love Air and Space.’ But then they say ‘Dad, when are we going to have fun?'” Peterson said. “Washington is just fabulous — it’s our nation’s capital, and I call it the world’s capital. … But the great cities of the world are usually on rivers, and they use them. We don’t use the Potomac like we should.”

National Harbor began with a convention center and 2,000-room hotel that opened amid the Great Recession. Over time, it’s drawn conferences, as well as tourists and families driving from Philadelphia, Baltimore and Virginia. Officials said visitor numbers total 8 million to 10 million annually.

Five hotels now offer views of the water. The harbor has added paddle boating and waterfront activities. The National Children’s Museum moved here from Washington. New townhouses sell for more than $500,000, and businesses are leasing office spaces. In November, an outlet shopping center opened nearby, and MGM will open a casino resort in 2016.

“We’re just now hitting our stride,” he said, estimating the Capital Wheel should draw a million riders its first year. “The kids are going to go crazy … We know what the Washington region is demanding — it’s entertainment.”

Robin McClain, who heads marketing for the tourism bureau Destination D.C., said anything that attracts more people to the region is good for business. But she said Washington’s attractions are one-of-a-kind.

For its part, National Harbor has room to grow, with enough land to triple in size.

“We’ve got a lot left to do,” Jon Peterson said. “It’s going to be exciting to see who comes to the front door and wants to be part of this.”