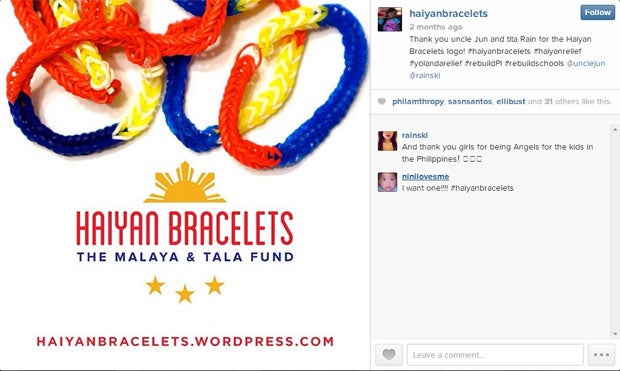 Samples of the rainbow looms sold by sisters Malaya and Tala David for the benefit of “Yolanda” victims. SCREENGRAB from the Instagram account of haiyanbracelets

2 kids raise over $100K for ‘Yolanda’ victims by making bracelets

MANILA, Philippines—Making rubber band bracelets may just a hobby for many children but not for two young kids who managed to raise $100,000 for “Yolanda” victims in Leyte.

The money raised by  10-year-old  Malaya David and her 13-year-old sibling Tala, both based in Berkeley, California, was donated to  build a four-classroom school building in Maribi,  Tanauan, Leyte, one of the areas ravaged by super typhoon “Yolanda” (international name: Haiyan) in November last year.

Rehabilitation czar Panfilo “Ping” Lacson narrated the story of the two in a radio interview on Friday.

(When they saw in CNN the devastation in Leyte, they asked their grandfather over dinner: “Grandpa, we want to raise $1,000 dollars so we can give to Tanauan, Leyte.” Because they saw the situation there.)

(So what they did was they sold it online– the rubber brand bracelets that are popular now among kids–they sold them. They were able to raise $100,000.)

Lacson, in a text message, said the Malaya-Tala Fund raised a total of $135,000 which was also used to donate urgent school supplies to other elementary schools—San Roque and Santo Niño Elementary Schools, both also in Tanauan, Leyte.

He said the kids’ grandfather, Amado David, personally went to the province to attend the groundbreaking ceremony of the school last Wednesday where he shared the story how the money was raised.

He said the story of the two kids should serve as an inspiration or motivation to everybody to help speed up the rehabilitation efforts in Yolanda-stricken areas.

“Instead of criticizing, we (should help) in our own small way to speed up the rehabilitation,” Lacson said.