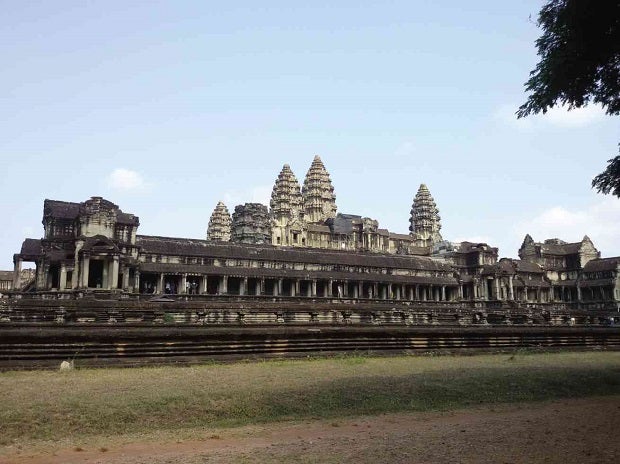 Explore Angkor Wat–just with your fingertips

What’s the next best thing to traveling to a destination, if you can’t make the journey? Looking at pictures of it, of course.

Photos, however, can only go so far. Their static nature means you get only a partial picture of the natural wonder or historic monument you’re interested to explore. Perhaps a series of photos stitched together would provide a more expansive view—but still nothing compared to an up-close, 360-degree impression of the sight.

Well, how about 90,000 images—taken from every angle possible, from long-shot street view to incredibly fine-grained close-up, then woven by proprietary technology into a seamless, almost three-dimensional image that you can then explore on your computer to your heart’s content, just by clicking and dragging the mouse?

That’s what the technology giant Google has done with its recent launch of the Street View imagery of the largest religious monument in the world, Cambodia’s Angkor Wat.

Google’s Street View project, which promises users the ability to “explore  world landmarks, discover natural wonders, and step inside locations such as museums, arenas, restaurants and small businesses with 360-degree images…,” now allows any Internet user to virtually roam Angkor’s spectacular complex of over a hundred 12th-century temples, dart into deserted alleyways and ruins, even zoom in on the gigantic faces in the Bayon temple towers or the rich stone carvings depicting the Battle of Lanka from “Ramayana” in the main temple structure.

Google used a mix of innovative technology and classic legwork for this monumental project. It hired Street View trekkers—basically local guys carrying a custom-built backpack rigged with a panoply of cameras, the contraption also a Google invention. They roamed, climbed, hiked and went into any part of Angkor not accessible by vehicle. They took pictures of it from all available sides.

Cars outfitted with cameras went around the area to photograph the exteriors. Those needing specialized photographic work—the low-light interiors of temples, for instance—used old-fashioned tripods and timed shots.

The result is a stunningly tactile rendering of the Angkor monuments. Drag the mouse a bit, and you can almost touch the gnarled, centuries-old roots of The Sacred Tree in Ta Prohm that was featured in the Hollywood movie “Lara Croft: Tomb Raider.” Zoom out, and you can find yourself on the periphery of the courtyard pond (parched in the summer months) that reflects the towers of Angkor Wat.

Click on another link, and marvel at the incredible detail of the fabled bas-relief called the “Churning of the Sea of Milk.”

The images are accompanied by authoritative text produced in collaboration with the Cambodian government agency that  manages Angkor and the Siem Reap region, the Apsara National Authority.

Manik Gupta, group product manager for Google Maps, said the Street View project is about taking the experience of maps to a new level. “It’s no longer just search, but also exploration—what’s around your neighborhood.”

Now covering 55 countries and with some 600 million miles driven to obtain its unique, panoramic street-level imagery, Street View offers users the flexibility not only to find a location on a map, but to virtually explore the neighborhood and navigate its streets. (To ensure privacy, Google’s technology blurs faces and car plates, and users may request the removal of images of themselves, their children or their property from the Maps.)

“It’s a complete experience of the space, as if you’re walking through the place,” added Amit Sood, director of the Google Cultural Institute.

That street-view template is the same principle the institute has brought to its World Wonders Project, which aims to make the world’s greatest monuments, museums and natural wonders accessible to practically anyone on the planet via interactive 360-degree digital imagery.

“Maybe you cannot travel at this time, or you’re a student, or maybe you don’t have the resources—but now you can access 440 institutions and places in 55 countries around the world,” says Sood. “That includes the millions of people outside Cambodia who now have access to Angkor’s cultural heritage.”

The list of world places covered so far by Google’s Street View project includes Argentina’s Christ the Redeemer, the Hiroshima War Memorial, the Eiffel Tower, Venice, and the Taj Mahal (zoom in on the throng streaming through the mausoleum’s courtyard, or take a closer look at the enthralling marble inlay work) to natural wonders such as the Grand Canyon and Colorado River, Mt. Fuji, the Canadian Arctic, the Amazon, and the Galapagos Islands.

Some, but not all Unesco World Heritage sites, are included (“There is heavy density of the coverage at this time in Europe and the US, and we’re only starting in Asia and Africa where this tool is most needed,” said Sood), along with modern specialized destinations—the CERN Laboratory in Switzerland, for instance, and various university campuses.

Through its Art Project, meanwhile, the Google Cultural Institute has also forged partnerships with some of the world’s most important museums—among them the Metropolitan Museum of Art and the Museum of Modern Art in New York, the Uffizi in Florence, the Tate Gallery in London, the Reina Sofia in Madrid, the Rijksmuseum in Amsterdam, the State Hermitage Museum in St. Petersburg, and the Museum of Islamic Art in Doha, Qatar—to bring these institutions’ art treasures, archives and research materials into one website, where users can enjoy virtual tours and an extraordinarily closer look at select paintings, sculptures, vintage photographs, and artifacts.

Over 356 exhibits from 455 partners are available on the site, including the largest online selection—over 100—of Vincent Van Gogh’s paintings.

Some of the 45,000 images of artworks contributed by these museums are rendered in gigapixel format, which “allows you to travel within the painting and come as close to it as possible,” said Sood.

With the ultra-high-definition technology, it has become possible to see every sinuous line and brushstroke of Marc Chagall’s Paris Opera ceiling, for instance; the pearl diadem adorning Venus’ hair in Rubens’ “Venus and Adonis” at the Museum Kunstpalast; or the features of the tiny goatherd staring across the stark distance at a saintly apparition in Bellini’s “St. Francis in the Desert,” in The Frick Collection.

The Philippines is represented in the lineup by Ayala Museum, but it’s quite a woeful contribution at this time with 15 of its dioramas in high-resolution. Sood said Google has also started Street View work on Intramuros, and is open to partnering with other entities such as the National Museum and other Philippine cultural centers.

“We would love to work with the National Museum, but the way it works for us is, we need to be also somehow contacted about it,” said Sood. “We’re a small team in Google, and we’re noncommercial—we are not monetizing a lot of this content. With Ayala Museum, they contacted us.”

And not just the museums. Like Cambodia’s Angkor Wat, the country’s ancient churches, at the very least, deserve digital preservation and inclusion in the World Wonders Project. The boon in cultural accessibility, not to mention tourism, can be significant.

But, yes, while Google’s technology is free, somebody needs to make that call first from our end.