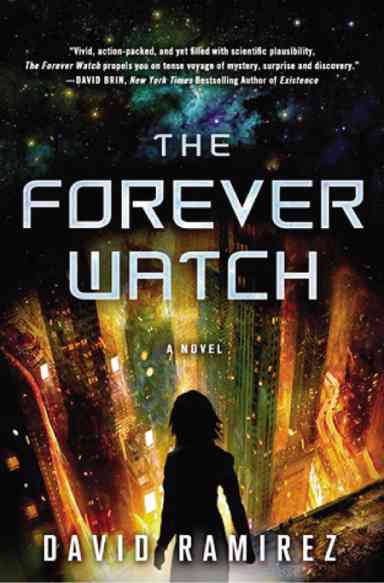 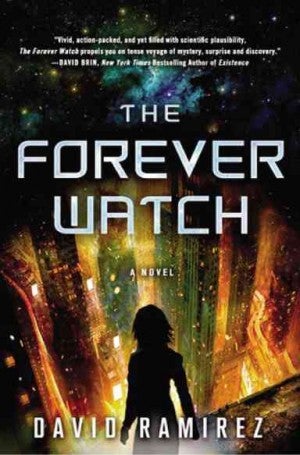 Much of David Ramirez’s life is full of science. A former molecular biologist, Ramirez had worked on the cutting-edge Human Genome Project, an international study into the nature of human DNA, and then came home to the Philippines to get married. Ramirez also decided to add “fiction” to the “science” part of his life.

The product of that merging is Ramirez’s debut novel, “The Forever Watch” (Thomas Dunne Books, New York, 2014, 326 pages). It takes a pretty hardcore sci-fi premise (mankind stuck on a ship in deep space) and then infuses it with two unusual elements: romance and mystery.

After the Earth is destroyed, mankind sets off on a thousand-year voyage to the stars on a mammoth, highly advanced ship called the Noah (yes, as in the Biblical man who built the Ark). On the ship, humans with high-tech Implants live in a heaving-controlled environment where roles are determined by the mysterious Information Security division.

Officially, life on the Noah is a utopia (whenever that word comes up, it usually means that it isn’t). But several hundreds years into the voyage, a smart city planner with psychic skills named Hana Dempsey discovers that many passengers on the Noah have been violently killed—so violently that they’re called Mincemeat killings—and that somehow these incidents are being covered up. And it’s been happening for a very long time.

Perhaps this also explains a series of abrupt disappearances on the ship. Why then are those vanished people officially recorded as having reached what the officials call “Retirement”?

Shortly after her newborn baby is taken away (on the Noah, Breeding Duty is exactly that, duty) Dempsey learns of Mincemeat because of her lover, the police investigator Leon Barren, who is looking into the disappearance of his old boss but instead discovers what might be a systematic means of murdering select Noah passengers.

Then one day, Barrens vanishes. Beside herself, Dempsey struggles to find the truth and her lover when she uncovers one last message from Barrens: “They are already watching you. Hana. You have to run. Today. Get to where they can’t track your Implant. I will find you.”

From that point on, “Forever” launches into a complex spiral of secrets that threatens to undo the society Dempsey lives in, the society built on the Noah’s purpose. There’s a lot of uncovering to be done and then the exposed scope of “Forever” truly startles. Amid the lies, Dempsey holds on to her hope that she will be reunited with Barrens.

That’s important because “Forever” starts off with a vivid bit of world-building where readers will learn about the intricate ins-and-outs of Noah life. We have seen life-on-spaceship books before, but Ramirez adds so much detail he makes “Forever” distinctive.

It is, however, a massively dense part that thankfully relaxes as the novel hurtles forward. “Forever” never completely loses that feeling of density, but it is obscured by the furious race to the conclusion. In particular, the final chapters bristle with ambition and purpose: the cry of war and the blinking of memory.

Ramirez throws in the Dempsey-Barrens love story for good measure, and Dempsey makes for an interesting heroine, avoiding becoming someone made of stock character parts by developing a truly agonized personality because of all she’s lost. It gives her strength from pain.

The end result of Ramirez’s balancing act is not unlike the Noah itself: heavy but with direction. It’s a sci-fi novel that strives to be more than just another sci-fi novel. Part whodunit, romance and space epic, David Ramirez’s “The Forever Watch” is a dense but diverting depiction of humanity grappling with the real unknown: life beyond what is easily imagined.

“The Forever Watch” is available in hardcover at National Book Store.