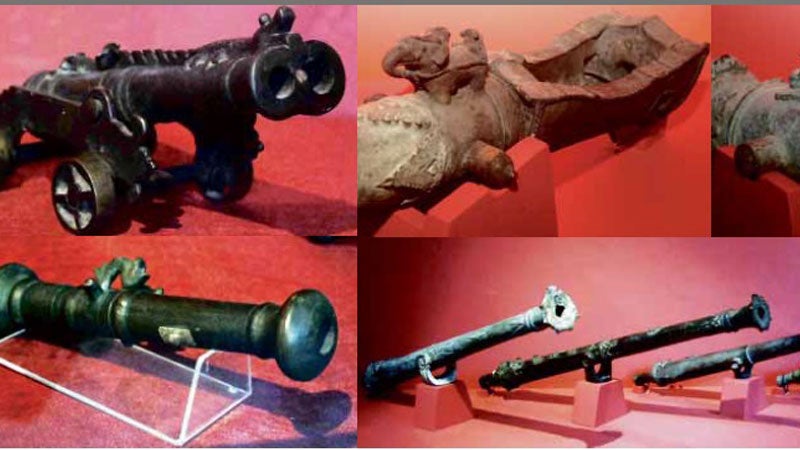 On the National Heritage route of the Cultural Center of the Philippines’ recent Pasinaya open-house festival was the seldom-seen lantaka exhibition at the National Museum, probably known only to those interested in ancient Filipino warfare.

A lantaka is a small swivel gun or cannon made of brass. An exhibition note says these objects—rarely emphasized as part of the local weaponry like blades and shields, spears and arrows—were mounted on trading and raiding vessels plying the Southeast Asian maritime routes; or on walls and palisades of forts to protect communities against rampant raiding before the 16th century, and eventually to resist Spanish colonization.

“Not all lantakas were used as weapons, however,” the note continues. “Some were made and used as signaling devices to mark events or warn against impending threats. Others, particularly those with ornate decorations, were used as medium of exchanges or markers of distinctions.”

Three of the biggest lantaka collections hereabouts are the National Museum Collection; the Miailhe de Burgh Collection; and the Brunei Bedil Collection. Specimens from the first two are now on display on the third floor of the Museum of the Filipino People (formerly Finance Building), Finance Road, Manila.

William-Alain Miailhe de Burgh says that, in the exhibit, 20 are from his collection and also 20 from the National Museum. They include distinctive ordnances, morteros, miniatures—regarded as “an exceptional selection” and considered important for their rarity, diversity and historical value.

“In Mindanao, Brunei and Indonesia,” he says, “the number of wives and lantakas you possessed was a status symbol.”

His lantakas, dating from the 17th century to the 1850s, he obtained in Mindanao. He says know-how in cannon-making came from the Turks, Mongol India, and went through Southeast Asia until it reached Mindanao.

Of Irish-French stock, De Burgh came to the Philippines in 1949. He says one of his ancestors, John Benjamin Beutler, was already here in 1828 and established the first British trading firm in the country. An uncle was held under house arrest during the war and lost everything later, including a 5,500 sq-meter ancestral lot near Malacañang.

De Burgh started collecting artifacts in the ’60s: ivories, woodcarvings, ancient maps, rare books; including a 1595 manuscript by one Diego Veloso of the Spanish embassy in Cambodia. Then he was told he could find those cannons in Mindanao.

He has written of his lantaka collection for the first part of the two-volume “Of War and Peace: Lantakas and Bells in Search of Foundries in the Philippines,” recently released by the University of Santo Tomas Publishing House and launched at the Marble Hall of  the Museum of the Filipino People, simultaneous with the opening of the exhibit.

The first volume, “Lantaka: From 16th to 19th Centuries,” De Burgh co-wrote with Fe Mangahas, whom he credits for much of the technical research and invaluable guidance in writing.

After this exhibit, the museum plans to put up a show of ancient bells, to complement the companion volume “Bagting: The Evaluation of Time and Memory in Spanish Colonial Philippines,” by Regalado Trota José.

José, archivist of UST Museum, says he had done 30 years of research on our church bells, including at archives in Spain, which to him are the best for research. He says he had examined some 1,000 ancient bells from Batanes to Mindanao.

The oldest he found in Camalaniugan in Cagayan, dating to the 1590s; the newest dated 1898 (from late Spanish to early American periods), which he speculates must have been made by Hilario Sunico, the most famous bell caster of that era, in San Nicolas by Pasig River.

“We have a rich tradition of metallurgy,” says José. “This local metallurgical tradition we can trace to Panday Pira in the late 16th century, who was based in what is now Sta. Ana, Manila.”

Church bells are of cast bronze (alloy of copper and tin), brownish in color but turns into a sea-greenish patina on bell towers in coastal towns. There are no silver bells, says José—only campanilla, as it would crack if it were any bigger. It is only a legend then about those gigantic bells cast from molten silver coins in Pan-ay town in Capiz, which were seized by pirates but sank in the sea.

José says our bells during the colonial era were imported from Mexico, since the foundries then were in Spain and France. In the late 19th century, our first foundries were built in Intramuros. Later, itinerant bell casters appeared, as in San Joaquin town in Iloilo.

“The irony is, we have an ancient tradition here but now we’re importing bells from The Netherlands,” says José. “The local industry is in decline.”

The bell industry in Manila, Cavite and Iloilo is connected to the naval industry, as the casters of bells are also casters of anchors, chains and other implements of boat craft. These foundries then are apparently for both war and peace.

In the late ’90s, José agreed to write a book on our ancient bells. He spent two years writing it.

But as such artifacts either couldn’t be easily removed from their belfries or accommodated in a gallery for their sizes, José says the forthcoming exhibit will focus on the musical side of bells, such as chimes and handbells.

The lantaka exhibition note illuminates the theme that joins these double shows: “Studies reveal how objects used in seemingly incongruent contexts—in war and peace—potentially have similar, if not entwined, production technologies as illustrated by the melting and conversion of church bells into lantakas in times of war.”