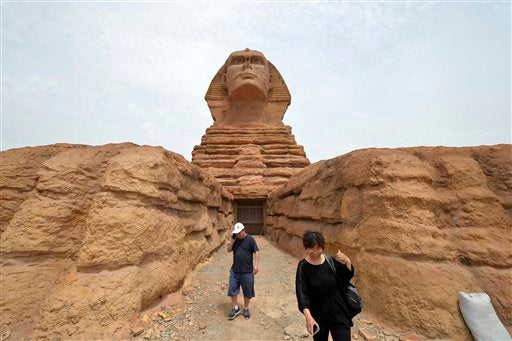 In this Tuesday May 13, 2014 photo, people visit a full-size replica of the Great Sphinx of Giza in a village near Shijiazhuang, in northern China's Hebei province. The concrete-made-replica, built in a video and animation industrial park, has a movie studio inside. (AP Photo) CHINA OUT

BEIJING — A replica of Egypt’s iconic Sphinx built in northern China will be dismantled after an Egyptian ministry complained about the structure, state media said Sunday.

A massive replica of the ancient statue was built in Hebei province, the official Xinhua news agency said.

But Egypt’s ministry of antiquities complained to the United Nations Educational, Scientific and Cultural Organization (Unesco) about the Chinese imitation, it cited a source as saying.

The report quoted an official with a cultural park on the outskirts of the provincial capital Shijiazhuang as saying the imitation would serve only as a temporary scene for shooting movies and television dramas.

“We are very respectful to world cultural heritage and express our apologies for any misunderstanding,” added the official, who declined to be named.

Already notorious for copying Western goods ranging from trainers to champagne, China is building up its replica reputation with a miniature Mount Rushmore, an Eiffel Tower and an entire Austrian village.

In the southwestern megacity of Chongqing, a park is scattered with sculptures including Michelangelo’s David, Rodin’s Thinker and the gigantic heads of four American presidents in a trend known as “duplitecture”.

An assemblage of Parisian monuments including the Eiffel Tower and a fountain from Versailles stand in the city of Hangzhou, as does a French village.

Among the most eye-popping examples are a copy of the Austrian alpine village and Unesco World Heritage Site of Hallstatt in the southern province of Guangdong, which even state media called “a bold example of China’s knock-off culture”.