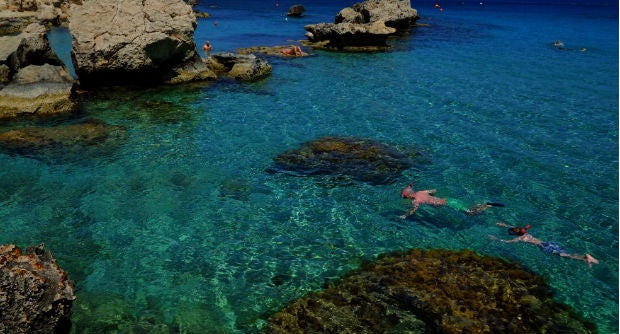 A father with his son enjoys snorkeling during their vacation at "Konnos" beach near the southeast famous coastal resort of Ayia Napa, Cyprus, Sunday, May 25, 2014. Cyprus and landlocked Luxembourg have topped a European Environment Agency survey, which found that all their bathing destinations were "excellent" in terms of water quality. AP

BRUSSELS— Swimmers wanting to take the plunge this summer in Europe can do so safe in the knowledge that the continent’s 22,000 bathing destinations are getting cleaner.

The European Environment Agency (EEA) in a report released on Tuesday found that water quality in almost 95 percent of bathing spots covered by its 2013 survey was at acceptable levels.

“We are no longer discharging such high quantities of sewage directly into water bodies,” Bruyninckx said, adding that heavy rain and flooding of sewerage systems were the main challenges for Europe’s water quality authorities today.

But in Europe’s over 6,000 “inland” bathing destinations, mainly lakes and rivers, water quality is dripping away, with 90 percent of areas rated as having “sufficient” standards, down 1.2 percent from 2012 levels.

A further two percent of inland destinations had “poor” water quality, the survey found. The remainder were not included in the survey, which covered EU member countries as well as Switzerland and Albania.

Cyprus and landlocked Luxembourg topped the list with all bathing destinations classified as “excellent.”

The highest rates of “poor or non-compliant” bathing waters were in Estonia, where 5.7 percent of areas surveyed fell short of acceptable quality standards, followed by the Netherlands (5.1 percent) and Belgium (3.5 percent).

Albania’s bathing destinations were even worse, with 8.2 percent of water deemed “inadequate” for swimming, although the country wasn’t directly compared to the rest of Europe as it was included in the survey for the first time.

The survey was compiled from water samples taken during the 2013 bathing season from waters across Europe. The samples were checked for two types of bacteria which can indicate the presence of pollution, usually from sewage or livestock waste.

The EEA has also developed an interactive map, to give holiday-makers a snapshot of how their favourite swimming destinations compare.