The leaf and the grape, not so distant cousins? | Inquirer Lifestyle ❮ ❯ 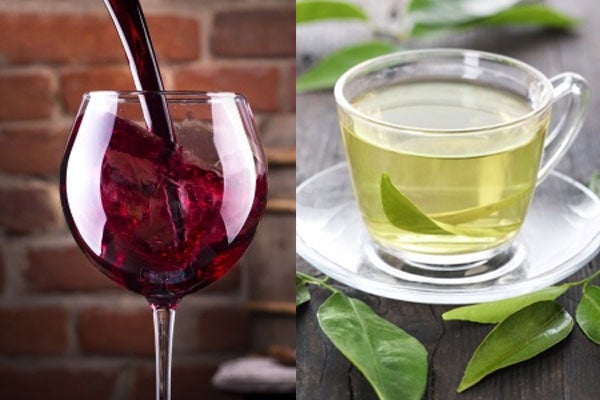 The leaf and the grape, not so distant cousins?

BEIJING — One is alcoholic and the other teetotal, but wine and tea are not such remote relatives in their rituals and cultivation, according to a newly opened exhibition in Beijing.

They are both symbols of conviviality and lifestyle, have been consumed for thousands of years, and come from “trees of life” — the bush and the vine — that have been revered and mythologized in different cultures for millennia.

“Tea was a medicine at first and it was saved by Buddhism. And the wine of antiquity would have disappeared if it wasn’t for Christianity,” said Jean-Paul Desroches, curator of the “Tea and Wine: A Shared Passion” exhibition at the Yishu 8 gallery, on the site of Beijing’s former Sino-French University.

He based the exhibition on a long-forgotten Tang dynasty Chinese text, the Chajiulun or “dialogue of tea and wine”.

Written in ink brush more than 1,000 years ago by a certain Wang Fu, it was among the manuscripts discovered in the early 20th century in the caves of Dunhuang, long a stop on the Silk Road.

Four copies are preserved at the France’s national library, and two in the British Library.

Wang Fu imagined a conversation between tea and wine, each drink boasting of its merits and mocking the other, until a third beverage joins in.

Water tells them that all living things need it, and without it, they would be nothing, ending the argument.

“Tea and wine have a totally parallel history,” he says.

Teas come in multiple colors — red, green, yellow, black, white — as do wines, and the characteristics of a vineyard are as essential to the taste of a wine as those of a garden to tea.

Similarly connoisseurs deploy a language of fruits, tannins, and finishes when they compare different varieties. And just as white wine is generally drunk earlier than a red, green tea is consumed earlier than fermented tea.

Wine, though, came of age around the eastern Mediterranean, while southern China claims to be the birthplace of tea.

There, in Yunnan province, Li Minguo grows puer, one of the “grand crus” of tea.

A culture as rich as those surrounding wine in Europe has grown up in the mountains abutting the Mekong basin, she says.

“Good wine and good puer tea both need a special environment, rich in biodiversity,” she says.

“And when quality is part of the mix, they can be preserved, aged and classed according to their vintages. In that they are very similar,” she says.

“Puer tea can also be compared to wine in that it grows on large trees. Their roots are very deep and their branches very old.”

As with great Bordeaux of exceptional vintages, the price of old puer tea rises with time and has soared at auctions in China.

Wine in France and tea in China “both have 2,000 years of history”, said Sophie Kessler, who runs the Chateau Calissanne in the hills of Aix-en-Provence in France and came to Beijing to promote it.

Among the artefacts at the exhibition, which opened earlier this month, is a ceramic pillow dating back to the Northern Song dynasty of 960-1127.

It bears the inscription: “Nothing beats wine for dispelling fear, but a drink of tea will make your mind clear.”

Tea for coughs, and other home remedies