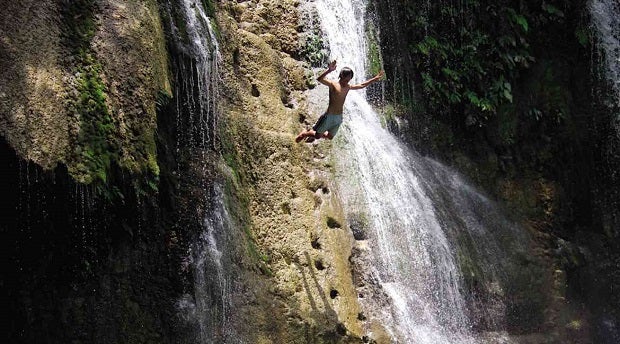 TAKING THE PLUNGE Resident diver Joel Lopez, 15, does one of his breathtaking free-fall, 30-foot dives at Gunhuban Falls in Bato town, Leyte. Joel, a native of the town, has been diving since he was 8 years old. DANNY PETILLA/CONTRIBUTOR

BATO, Leyte—On a moonlit night, Gunhuban Falls, located deep in the heart of Leyte’s forest, shimmers like a silver-encrusted emerald ring with lush, bright-green shrubbery and vines around it.

The mighty roar and blinding liquid blur of the endless cascade, the frozen-water feel on bare skin, plus the curative mists that sometimes smell of camphor and other aromatic scents from  herbs growing in copious quantities around the falls, are enough  come-ons for the stressed-out urban denizen to pack up their bags and go.

But despite its attractions and built-in charm, many have not taken to the road to pay a visit.

Compared with other waterfalls found in the provinces of Leyte and Samar, the short trek from the highway to the falls is one reason why you should not miss this not-so-hidden summer getaway.

Those who have visited the place talk in awe of tall green trees that provide protective cover from the summer sun’s punishing rays. The natural bluish-green hue of the riverbed, under a canopy of lush emerald trees is an open invitation for a dip.

The cold water, however, does not deter the adventurous from turning up for a dip.

“The colder the water the better it is for me,” said Rommel Gaviola, 15, vacationing from nearby Macrohon town.

The boys (and occasional girls) of summer get their diving fill here, and the 30-foot plunge is required routine for the agile visitor with just enough aerobatic skills who cherishes thrill-filled memories to remember a summer by.

Taking the plunge here has become commonplace for 15-year-old Bato native Joel Lopez who has been diving from the top of Gunhuban’s cliff since he was 8 years old.

“Diving is like breathing to me. Although I don’t get too excited about it anymore, the experience still relaxes my mind,” said Lopez.

He is also a favorite subject of visitors and tourists who want to photograph and document his favorite free-fall and air-walk routine plunge.

“I have seen my diving photographs on several sites on the Internet,” Lopez said.

In effect, Lopez has grown from a simple river urchin to become the place’s unofficial ambassador, or  mascot, depending on your point of view.

Not on the list of the Department of Tourism’s priority destination sites, locals and foreigners have somehow found their way here by word of mouth and the wildfire effect of social media.

The provincial government, too, is fast catching up after it discovered   its potential as a tourist destination.

For one, it is set to pour public funds for the construction of a 1.2-kilometer concrete road and a 35-meter concrete bridge leading from the Bato-Sogod highway right at  the doorstep of Gunhuban Falls.

“The project is part of the Department of Tourism and [Department of] Public Works and Highway’s Tourism Road Infrastructure Project set to begin next month,” said Bing Norbert P. Lumbre, one of Leyte’s tourism operations officer.

A newly built stairwell leads visitors to the falls area. Blocks of concrete squares serve as a footbridge to the picnic area. The lack of accommodations for persons with disabilities (PWDs), however, is a drawback.

There are no standing kiosks but you can rent plastic tables with chairs  at P100 a pair. Plastic tubes used as flotation devices for swimmers are available at P35 a pop.

An overnight stay for those on group tours who want to pitch camp at the  site guarded by local barangay tanod costs P1,500.

But the absence of food outlets and accommodations for PWDs are telltale signs that the area is not on top of the agenda of local officials.

Attention, Mayor Nathaniel Gertos: time to spruce up the place.

“We are still undeveloped as a tourist destination by any account, but we are doing our best to satisfy local visitors and foreign tourist travelers alike,” said Oscar Peñaranda, caretaker of the falls.

Peñaranda named actress Shaina Magdayao and cager Paul Artadi as among the trickle of celebrities  who have come to visit.

On a Saturday when this writer visited the falls, there were about 80 groups sharing the  cool waters, according to Peñaranda’s logbook.

Largely spared by the destruction wrought by Supertyphoon “Yolanda,” the town has steadily grown as a commercial center in the southwestern part of Leyte and  is an important whistle-stop for those traveling to Southern Leyte province.

In his book “Leyte Towns: Histories and Legends,” writer Francisco Tantuico noted how this town and its natural beauty have become a magnet for its neighbors inland and across the sea.

“The Cebuanos and the Boholanos just across the sea have always been attracted to Bato’s wide coastal plains,” wrote Tantuico.

If local officials learn to wise up and develop and promote the place, Gunhuban Falls could be on the list of  summer itineraries of tourists in search of new  destinations. As the oft-quoted phrase goes: If you build it, they will come.

Bato is 140 kilometers from Tacloban City and 100 kilometers from Ormoc City. Visitors using their own vehicles can cut their travel time by about an hour using the Mahaplag- Sogod Road via Agas-Agas Bridge, instead of passing by Baybay City.

There is Duptours shuttle services (the popular commercial mode of transport) from Tacloban to Maasin, Southern Leyte, that passes through Bato. It leaves their hub in Tacloban at 5 a.m. and ends the service at 6 p.m., with eight trips in between. One-way fare is P220.

There are several vans and buses going to Maasin (also via Baybay) that pass by, with a stop in   Bato. The fee for a one-day private trip starts at P3,000.

The way to Gunhuban Falls starts at the welcome sign to Barangay Buli at Sogod-Bato Road, and leads through a 3-kilometer winding road to the site’s entrance.

For those who want to stay longer, there are accommodations at Bato town  16 kilometers away.

Going to Tacloban? Be a tourist and volunteer