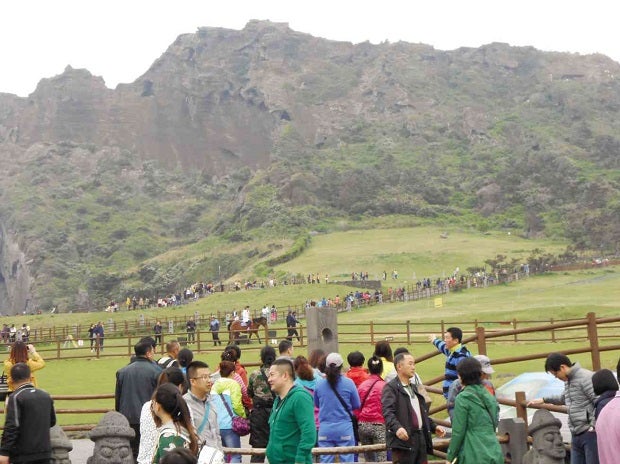 You can actually lose weight in Jeju Island

Jeju is for honeymooners, an officemate tells us the night before we leave Manila to visit Korea’s largest island—whose official name is Jeju Special Autonomous Province.

But Jeju, we soon discover, is also a great place to bring the whole family, and to lose some weight. More than 200 Filipinos are with us on this chartered tour, mostly families. In the next three days, we all do a lot of walking.

Good thing we’re wearing sneakers, because it takes some serious legwork to go up the 182-meter-high Seongsan Ilchulbong or Sunrise Peak, a Unesco World Heritage Site. No, we don’t get to the top, or the tuff cone, which is said to have been formed by hydrovolcanic eruptions about 5,000 years ago. Halfway through the trek, our shirt is already dripping with sweat, so we feel that’s enough exercise.

More walking is needed to appreciate Manjanggul Cave, another Unesco World Heritage Site, which is actually a tube or tunnel formed by lava flows that stretches to about 7,400 meters. It is dark and freezing cold inside, and the floor is wet, which makes walking quite difficult.

Again we walk, but this time at a leisurely pace, to Seongeup Folk Village, which gives us a glimpse of life in Jeju in olden times, when houses looked like those in Batanes. We are told that this is also the location of some Korea drama series that require period settings. The air is nippy, and we feel like drifting off to sleep.

Except that Korean food beckons. One restaurant called DonaDona offers its specialty, “black pork,” which is like wild boar—grown in free-range farms and without harmful chemical feeds. Grilled on a smokeless oven, the Korean barbecue tastes yummy—with or without the three types of sauces served with it. It’s supposed to be eaten with a lettuce wrap, like shawarma; before long, we wipe out what’s supposed to be good for four people.

Oh, but all that added weight is lost as we start walking around the Jeju Ice Museum, the Bucketlist Art Gallery, and the Jeju Folklore and Natural History Museum.

The Bucketlist Art Gallery is astounding for its faithful reproduction of pop culture images, which invite visitors to be part of the scenes—the most arresting, to our mind, is the cover shot of The Beatles’ “Abbey Road” album, with tourists taking the place of Ringo Starr.

The Jeju Folklore and Natural History Museum comes alive with a myriad of cultural relics and samples of indigenous plants and animals, including a long oarfish which catches the attention of a Korean boy.

But nothing beats the sight of Daepo Jusangjeolli Cliff, whose edges reveal the natural art of columns of rocks formed, again by lava—an omnipresent character of Jeju, since it’s a volcanic island.

A walk down one of its shopping districts leads us to an Adidas street sale, and we are tempted to buy a nice track-and-field jacket which is priced real low.

Our erudite female tour guide, Sunny Hong, tells us of a time in Jeju when a woman who wanted to work outside the home had only two career choices—become a seafood diver or a tangerine picker.

That means Jeju women follow tradition, or they’re naturally patient, sticking to the same jobs for the rest of their lives. Sunny, for instance, has been a tour guide for more than 10 years.

Eighty percent of Jeju’s economy is pumped by tourism, and Koreans themselves from other parts of their country take their loved ones to see Jeju Island. The Chinese, however, make up 70 percent of Jeju’s tourists.

At night, while riding the bus that takes us back to the hotel, we fall into slumber—only to awaken to the surprising choice of music played by the driver: Billy Joel’s “Piano Man,” Harry Nilsson’s “Without You,” Lou Reed’s “Pale Blue Eyes,” a Spanish song, among others.

On our last day we are brought to a cosmetic store with products all made in Korea. Sunny says Koreans are obsessed with having flawless skin, which explains why they take pains making a lot of these beauty brands. Sunny admits that she herself uses some of them.

She also wears an amethyst bracelet, which she says helps her blood circulation. The whole Pinoy entourage takes note of it while browsing through various amethyst jewelry at Dalwoo, a store owned by a Filipino woman who married a Korean.

So, while more and more Koreans go to the Philippines, many of them studying in our schools to learn English, it won’t hurt us to spread the word about visiting Jeju—because at a package of $707 per head inclusive of hotel accommodations and meals for four days, it’s a steal.

And in case you make it, please say a prayer for the Korean schoolchildren who recently perished at sea while on their way to visit Jeju.

Rakso Travel offers an exclusive chartered flight to Jeju Island via AirAsia Zest. Log on to raksotravel.com or call tel. no. 8129667.