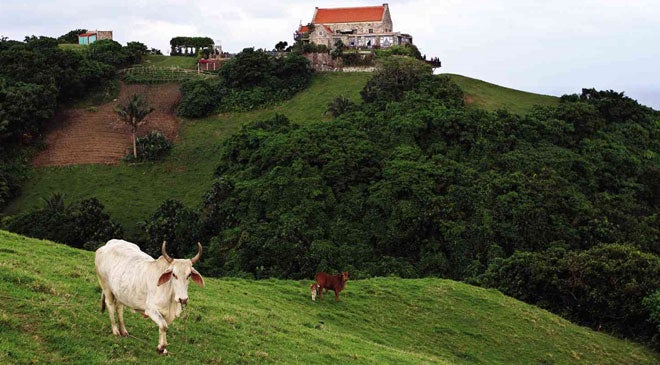 PASTORAL IDYLL. Perched atop the rolling hills of Basco, Batanes, the country-styled Fundacion Pacita Batanes Nature Lodge is a great place to relax and unwind, and commands an unobstructed view of the Pacific Ocean. It is named after one of the Philippines’ best-known painters, the late Pacita Abad, who was a native of Batanes. EDWIN BACASMAS

Boom and bane in Batanes, now storm-free for past 10 years

BATANES, Philippines—Storms have become a shy visitor in Batanes province in the past decade—an oddity believed to be due to climate change, which is slowly transforming the face of this island chain and its people.

Due to its location in the overlapping waters of the South China Sea and the Pacific Ocean, the Batanes island group is often on the flight path of big storms and typhoons, around 20 of which arrive in the country every year.

Until recently, it was considered to be the province most visited by tropical cyclones.

But the arrival of strong storms on the islands, which used to be an annual affair, has become less and less frequent over the years, striking instead in parts of the country that rarely experience them, such as Mindanao in December 2011 and 2012 with Tropical Storm “Sendong” and Typhoon “Pablo,” respectively.

For provincial environment and natural resources officer George R. Reyes, the scarcity of tropical cyclones in the country’s northern tip is both a blessing and a curse.

On the one hand, commerce, agriculture and tourism have flourished, he said.

More flights and ferry trips have opened to and from the province, access to education and business opportunities has improved, and the Ivatan people now regularly enjoy rice and mangoes, which used to be luxuries 10 years ago.

On the other hand, residents have become complacent in the face of changing weather, more dependent on modern amenities and less appreciative of their cultural treasures, Reyes added.

New housing structures now use weaker materials shipped from mainland Luzon, which is changing the landscape that used to be dotted with sturdy Ivatan houses made of thick limestone walls and thatched roofs against a backdrop of island greenery, grassland and beach forest.

Cultural values have eroded and the upward mobility of residents has led to slow birth rates and a declining population.

“I’d say the advantages are about equal to the disadvantages,” Reyes said when asked to assess the impact of climate change on Batanes.

The province is located at the northern tip of Luzon, composed of a chain of 10 islands with both the smallest land area (219 square kilometers) and population (16,604 as of May 2010) in the Philippines.

The last storm to hit Batanes was Category 5 Supertyphoon “Odette” in September last year but it only lightly grazed the province.

No other big storm has directly hit Batanes since Typhoon “Neneng” in 1987, said Juan Redondo, chair of Barangay Kaichanarianan, the financial hub in this capital town.

Reyes said another strong storm struck the islands in 1995 but the effects were blunted by the preparations of the weather-beaten residents. “Nobody dies of storms in Batanes,” he said.

In the 10 years since, he said, “there were no more storms that actually hit us.”

That storm-free decade led to dramatic changes in Batanes and its people.

“In the past, the residents could only plant root crops, like ube and sweet potato. But now, they could actually plant rice and corn, as well as fruit trees, like mango and banana,” Reyes said.

There was also an influx of tourists with more airlines opening flights as well as more regular trips by ship to and from the mainland, he said.

But Redondo said that with progress came certain setbacks.

“Because goods shipped from the mainland are now readily available, people have stopped planting root crops,” he said.

Before, residents temporarily survived with these crops whenever strong storms came lashing at the islands—at times, for a whole week, Redondo said.

“Now, there’s dependence on what they can buy elsewhere. I think that’s a negative [effect],” he said.

But Redondo said he believed that the Ivatan people’s resiliency to disasters was already innate in them and that they would be prepared, even if monthly storms began to batter them again.

Reyes said the people of Batanes should not be complacent.

“Ten years [of being storm-free] is not a long period of time,” he said. “The storms may still come back.”

Why some people shouldn’t go to Batanes