A hotelier’s life has its perks and pitfalls | Lifestyle.INQ ❮ ❯ 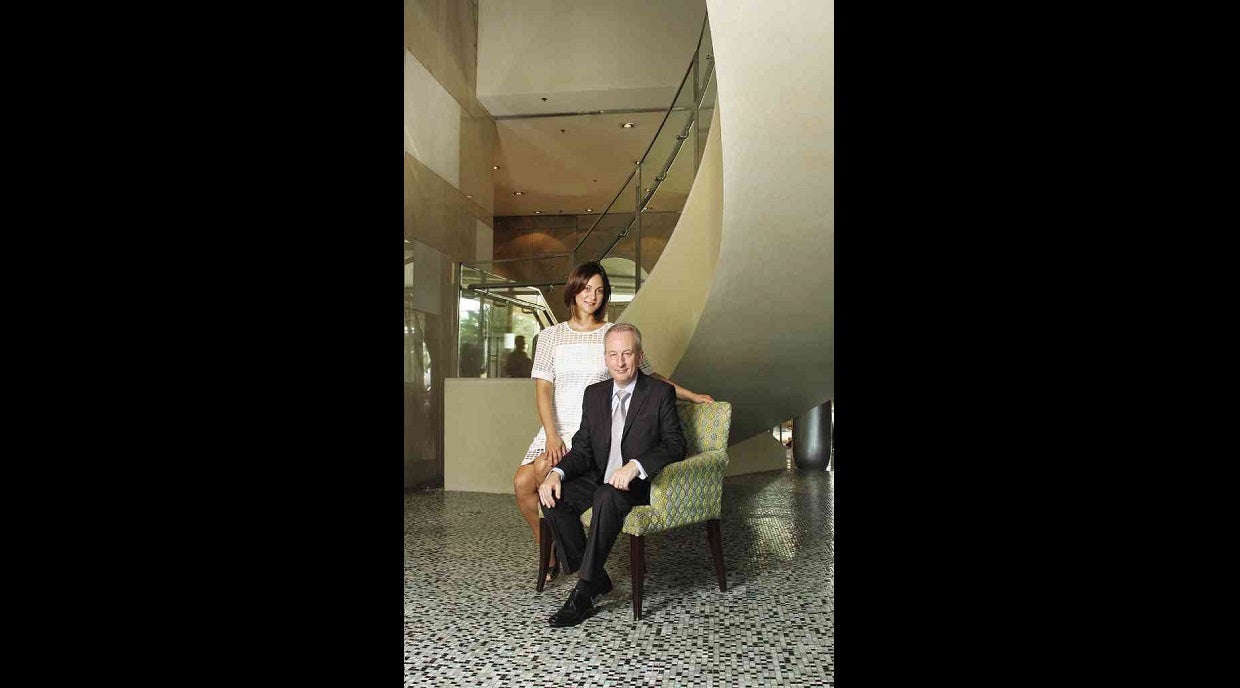 A hotelier’s life has its perks and pitfalls

Driving along the SLEX Skyway in 2007, the Filipino relatives of hotelier Bruce Winton pointed to the hole in the ground along the future Newport City in Pasay and said, “They’re building a Marriott Hotel. Wouldn’t it be nice if you worked here some day?”

It sounded like an affirmation from his in-laws, as the Scottish Winton and his Filipino wife Christina Diaz were still based in Korea.

Back then, Winton was resident manager for JW Marriott Seoul, while Christina was raising their two children. It took years of applying for the Manila post and a lot of hope before he was transferred to Marriott as general manager in 2013. He counted his wife as a major asset: “She’s a good social anchor. I can take her anywhere and she could start up conversations.”

They met at work at the JW Marriott in Washington in 2000. A graduate of business management from Assumption, Christina preferred to work in the travel industry. “I didn’t go into entertainment, since most of my family were in it. I wasn’t suited to that career, personality-wise,” she said.

The third of four children, Christina, 39, is the daughter of the late character actor Paquito Diaz. Her mother Nena is a first cousin of Eddie Gutierrez. Her siblings are actors Cheska and Joko Diaz. The eldest, Joanna, is also not into show biz.

Christina, then 25, worked as an associate trainee for the JW Marriott in Washington, reporting directly to Winton, who was then assistant food and beverage director. Her job entailed working in the hotel’s various outlets.

In the hotel industry, relationships at work were discouraged. Although they worked professionally, colleagues suspected there was a special friendship going on. When her training contract expired after 18 months, Christina couldn’t apply at the same Marriott property. Her only option was to go home.

“Somebody had to stop me. He might not see me again,” she said. When they were married in 2001, choices had to be made.

Christina found a job in a printing and graphics design company and got a temporary spousal visa.

A Filipino-American lawyer facilitated Christina’s green card in America. Meanwhile, Winton, who was a long-time green card holder, gave up his British citizenship. “I had been living in America since I was 21. I could have become a citizen much faster with my green card. When I married a Filipino, I decided it was time to become a US citizen.”

The Wintons bought a house in Maryland, a 45-minute drive to Washington. Their two children Alexandra and Colin were raised in the suburbs.

A turning point in Christina’s life came in 2004. On her way to the hospital to give birth to her second child, she received a call from home. Her father had suffered a serious stroke. In the operating room, her doctor wondered why Christina was crying when her successful Cesarean delivery of her son was a reason to celebrate.

After two weeks, the doctor allowed her to travel to be with her dad. Meanwhile, Winton was left with a 16-month-old daughter and a newborn son. Fortunately, his mother came over to look after them.

The Wintons value the importance of keeping strong relationships with each other’s parents and family. Budget and schedules permitting, they would travel on alternate years to Scotland and the Philippines. When the children got older, traveling became more costly.

“From the East Coast to Manila, that’s $2,500 each or $10,000. A big chunk of the budget was used to visit the family. We’d come to the Philippines once every three years. But after a vacation in Manila in 2007, the Marriott hotel under construction became a catalyst,” said Winton.

The Seoul posting was fortuitous because it brought the Wintons to Asia, closer to the Philippines. Christina easily adapted despite the challenges, such as the language barrier. She became part of a civic group, the “Mafia,” short for “Magagandang Filipinas,” which worked with charities and socialized with other wives of expats.

When the Department of Tourism had a roadshow in Seoul, she handled the merchandising and sales of local products .

One day, Winton was surprised to be told that he would be assigned to Marriott Cebu, promoted to general manager. After 10 years of living abroad, Christina would be back in the Philippines.

“Time went fast. It’s an intimate setting,” Christina said. She made a lot of friends, and even became president of the Parent-Teachers’ Association of the Cebu International School.

The posting was also fortuitous. Her father was seriously ill and was hospitalized in Bicol, her mother’s hometown.

“I’d go back and forth from Bicol to Cebu. The maids could look after our kids while my husband worked. I was with my father until his last breath,” she said. Diaz died of pneumonia and its complications in February 2011, at age 76.

Last year, when Winton gave up on the idea of the Manila posting, he received news that the Marriott Manila GM had moved to Resorts World.

“It was great to be back and be part of my family’s life again, but there were challenges. I left Manila when I was young. I had no clue of what was going to happen to me,” she said. “Coming back with a family and being international, you change. You adapt to change, you don’t resist it. Now I can speak up because I became independent in America.”

She has become more open-minded and appreciative of people’s diverse viewpoints.  Her children could easily settle in a new culture.

“If you give them the right tools, they will flourish and adapt to their environment,” she said.

Cultural differences were never an issue in their family life. In fact, Winton saw the similarities, such as the European influence. The Filipino’s fluency in English was important for establishing strong ties. He cited how his former American boss, who is married to a Hungarian, could never have a conversation with his mother-in-law.

“He visits her every year but she doesn’t speak English and he doesn’t know Hungarian,” he said.

Winton is close to his in-laws and even has his brother-in-law, PBA coach Jorge Gallent, as a golf mate.

Food is the easiest way to adapt to the culture. “Fifty percent of our meals at home are Filipino. I like the food like adobo, bistek Tagalog and arroz à la Cubana,” he said.

Another plus is the couple’s flexibility and open communication. There is no imposition of views from either side, said Christina. “If there is a difference, we talk about it and meet in the middle.”

Time is a challenge

In the hospitality industry, time is a challenge, she said. On Christmas, New Year and Mother’s Day, Winton works long hours at the hotel. However, he makes up for it at another time.

The hotelier hopes to have more time for travel. During home leave in Scotland, the Wintons usually spend two weeks with his parents.

“Christina has not experienced what I would have wanted her to experience. I want to go to the highlands, the most beautiful part of Scotland, and spend more time in Edinburgh where I went to university. It’s a fun city, but we’d spend only one night…”

For now, Winton couldn’t be happier. “I found it easier with the help. I don’t have to iron my own shirts. When Christina comes with me to events, we can leave the kids at home with people we trust. Abroad, we had a lady who did laundry and vacuuming for four hours a week. You pay full-blown Western prices for assistance. It would cost $100 for baby sitting. In Korea, we would have to host small dinner parties at home instead of going out. The adults would bring their children and they would play together. The Philippines has its benefits. As much as I enjoy it here, though, I would easily adapt again in another place,” he said.

Winton wants to stay longer in Manila as Marriott is bullish about its expansion. Next year, the Grand Marriott Ballroom will open in high style. He added that some expansion developments are under wraps.

He is also looking forward to being part of Marriott’s Quarter Century Club for employees who have served the hotel for 25 years. This means that he could spend a free weekend at any Marriott property once a year.

For now, he’s enjoying the perks of a general manager. Marriott provides for the children’s education and other school expenses; a four-week home leave with allowance, and life and medical insurance that includes dependents and pension.

Said Winton, “If you look at the the big picture, it would be difficult to replace this company. I had better do a good job. It’s been 24 years in the making, with a lot of blood, sweat and tears.”