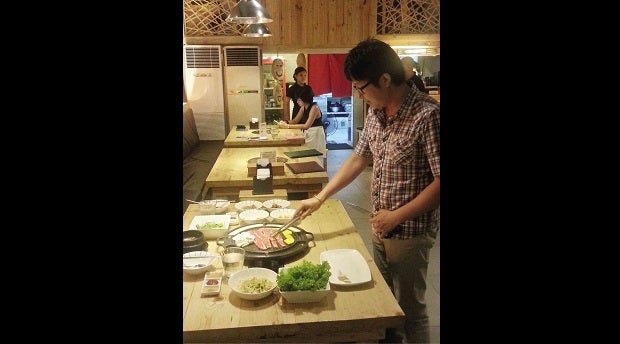 The problem for night owls is when they get hungry and can’t find a decent dining place that’s still open after midnight.

There are, of course, restaurants that operate 24/7, but most of them are fast-food joints.

Recently a musician friend told us about a new Korean eatery in Quezon City worth checking out because, aside from the good food, it’s open till 5 a.m. We had just watched a gig at 19 East in Sucat, Parañaque, and QC was quite a distance to travel just to grab a bite, but off we went anyway.

The first thing we noticed about The Gu-i Grill Bistro (Unit 1-A, 186 Tomas Morato Ave. corner Sct. de Guia, QC) is the personalized service. Executive chef and co-owner Thomas Shin, who was still wide awake at 3 am, gladly welcomed our group and proceeded to recommend what dishes we should try.

“Gu-i,” he said, is the Korean term for grilled food. The beef tenderloin and beef ribs we ordered were cooked in a pan grill with no oil. Which means it’s healthy, Shin said as he did the grilling while asking if we wanted the meat medium well or well done.

It didn’t matter if the beef had no marinade because we could dip it in three kinds of sauces—sesame oil, spicy soya bean and peanut. There were moments when we just gobbled it straight because the meat was tasty enough, with four side dishes, including the highly nutritious kimchi, whetting our appetite even more.

There was also a plateful of lettuce, into which we stuffed the meat, shawarma-style.

“The meat goes well with our rice wine,” Shin said, and we followed his advice, although we opted for San Miguel Pale Pilsen when we returned after a week. An order of beef ribs, at P400, is good for two persons and comes with unlimited side dishes.

We were just told that The Gu-i is now open from 10 a.m. till 7 a.m. the following day. Whoa, hardly no rest for the staff, which means the place must be doing well.

A word of advice for those taking the South Luzon Expressway route to get to 19 East on rainy nights: Better take the Skyway, which costs P118 but will save you the trouble of getting stalled in two low-lying areas before getting past the Bicutan exit.

It happened to us the night we went to watch South Border—traffic was at a standstill due to flash floods in the aforementioned areas. We managed to get past the floods while praying that the cab we were riding wouldn’t conk out, even as the driver said, “Madali pa namang tumirik ang Toyota Vios.”

It was still raining hard when we got to 19 East, but South Border’s engaging performance soothed our nerves.

A lot has happened—including the replacement of several lead vocalists and Durias being detained on trumped-up charges—between South Border’s peak years, the 1990s, and the present, but one thing is clear: The band shows no signs of folding up because the current lineup is probably its best so far.

The good news is that Durias has signed up for a new album deal with Curve Records, a Filipino-owned label put up by the group that used to run BMG and Sony Music Philippines.

Speaking of new albums, Freestyle has released its own independently produced CD, “Mga Kwentong Kinanta”—a few tracks of which were previewed during the band’s recent Tuesday gig, also at 19 East.

We loved the reggae-R&B vibe of “True Love” with Mike Luis on lead vocals; “Kulang ang Mga Sandali” and “Paputol-Putol” sounded like they would also be enjoyed by the fans.

Freestyle and South Border share some things in common; aside from Durias and Freestyle guitarist Tat Suzara both hailing from Davao, the latter has likewise been headstrong about making music against all odds. And just like South Border, Freestyle’s current lineup seems to be its best: Rommel de la Cruz (bass), Joshua Desiderio (keyboards, vocals), Gerald Banzon (drums), Ava Santos (vocals), Luis and Suzara.

Last call for those intent on catching Taylor Swift’s concert on June 6 at the SM Mall of Asia Arena: A fresh batch of tickets is now available at SM Tickets (tel. 4702222 or visit www.

This is Swift’s second performance in Manila since 2011, and should be interesting for its new repertoire from the singer-songwriter’s 2012 album, “Red”—which is also the name of her current tour.

She is expected to arrive either on June 5 or 6, and will be billeted at Sofitel Philippine Plaza.