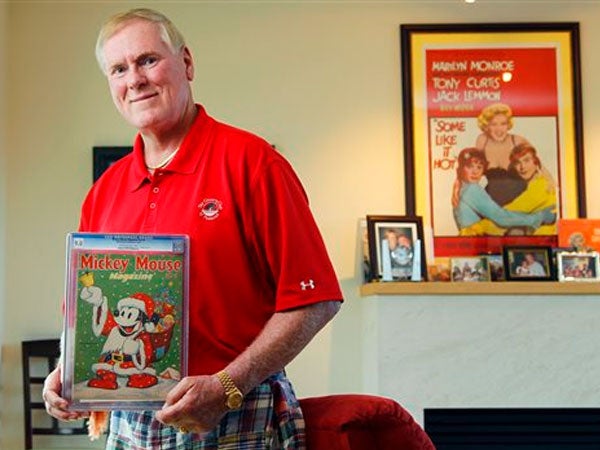 In this photo taken on May 19, 2014, John C. Wise, poses in his San Diego home with a 1937 Mickey Mouse Magazine. Though the magazine is not for sale, he is auctioning off some rare historic comic books from his collection. AP

LOUISVILLE, Kentucky — The first glimpses of iconic heroes Superman, Batman and Flash are part of a rare comic book collection a Kentucky man is auctioning off to the highest bidders.

Paducah insurance executive John C. Wise decided it was time to sell the collection he’s been accumulating over three decades, revisiting a childhood pastime that he picked up again in the 1980s after he became established in his career.

“I think it’s a good timing for the market, and good timing for me at age 62,” said Wise, who moved to Kentucky from his hometown of Rockford, Illinois, to attend college. “It’s not like I’m not going to take them with me.”

The books Wise is auctioning sold for as little as 10 cents when they were published, many in the late 1930s and 1940s. Some of the issues in good condition can fetch hundreds of thousands of dollars. He is auctioning about 175 comics individually, and online bidders have already committed about a half-million dollars to the auction, which ends Tuesday.

Among the offerings is a pristine issue of Flash Comics No. 1 from 1940, which tells the story of how college student Jay Garrick gained super-human speed by inhaling fumes in a lab accident.

“This copy is in incredible high-grade condition and is the second-best copy known to exist,” comic book expert Vincent Zurzolo said in an email message. Zurzolo is co-owner of New York-based ComicConnect.com, the online auction house that is selling Wise’s collection.

By Saturday evening, the bidding on that book alone had reached $91,000. Bids on the first editions of Superman, Batman and the Flash from Wise’s collection totaled $220,000 on Saturday.

Wise first started collecting comics at age 12, and sold his first collection to buy a car as a teenager. He picked up the hobby again later in life, and started frequenting Comic-Con in San Diego, where he eventually bought a second home.

Wise and Zurzolo said the exploding popularity of super heroes in movies and TV make it an opportune time to capitalize on valuable comics.

“The blockbuster movies are bringing in new collectors and investors into the vintage comic market on a daily basis,” Zurzolo said.

Wise is also selling a copy of Action Comics No. 1, which is the debut of Superman and is considered the birth of the comic book super hero. A well-preserved copy of the 1938 comic sold for a record $2.1 million in 2011. Zurzolo said there are fewer than 100 copies of the issue in existence.

Wise said he’s hoping the proceeds from the auctions will help him buy a new home in San Diego and fund college tuitions for his seven grandchildren.

“My daughters would rather inherit than collect comic books,” he said.