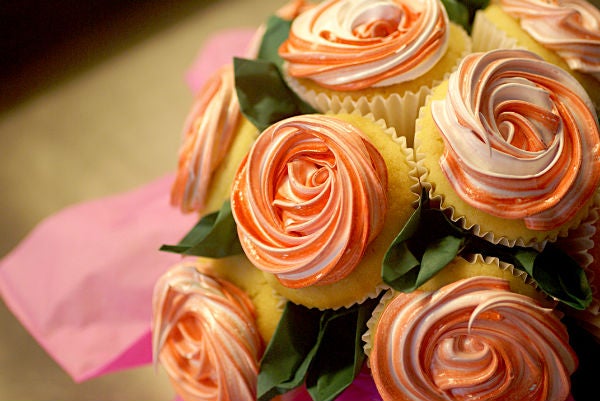 MANILA, Philippines — Don’t be surprised if the name rings a bell. This is exactly the same Cuptails and Dreams that has been in the local baking and pastries scene since 2007 – only that this year, it has a multitude of new things to offer.

From being a home-based business, Cuptails and Dreams owner Reena Francisco, together with her husband who’s now into the retail, finally put up a cuptail store for old and new fans. Now called “Cuptails,” the store offers Dela Rosa Carpark 1 diners a menu composed not just of unique cocktail-inspired cupcakes but also serves breakfast, lunch, and dinner.

Francisco says that non-alcoholic cupcakes are also available for those wanting to bring home something for their little ones.

When asked why she chose a cosmopolitan feel for the store, Francisco told INQUIRER.net that she wanted the interior to be “bright,” “clean” and “crisp.” After all, “cuptails” are considered adult cupcakes so what better theme matches adulthood than “clean” and “crisp”? True enough, the sleek design matches the mood of visitors very well. The simple design carries colors that are easy on the eyes, allowing diners to unwind. It can also serve as a good alternative for conference rooms as the place can hold a considerable number of people.

What it took to get here

For someone who has been baking since six, Francisco was in fact not among those who dreamed of opening a cupcake store of their own. Before she got into cupcakes, she had an established career in the media industry and loved what she did as a practitioner. But little did she know that the job that she has been doing for a generous amount of time in her life would not be the one she will settle down with.

It was in 2007 when the concept of “cuptails” first came knocking on her door. The idea just popped up while she and her husband were driving along San Miguel Avenue in Ortigas Center, and then the next thing she knew, she was already booked with cuptail orders for an entire year – mostly for wedding occasions. She left the media industry for two years to bake, but came back to the field she believed she was cut out for in 2009.

Then came 2012 when everything, including her husband’s unexpected training in the retail industry, started falling into place; that was when she gave “cuptails” a serious thought.

During her hiatus from baking in 2009, Francisco’s husband was suddenly given the opportunity to further hone his expertise in retail, while she herself bumped into people who remembered her for being “Reena of Cuptails.” This served as a turning point, thus resulting in the conception and opening of “Cuptails” in the final quarter of 2013.

The preparations for the first ever Cuptails store took most of Francisco and her husband’s time in 2013. As early as July of that year, Francisco has been training the people she’s chosen to be part of her life-changing venture in the retail industry. She was very hands-on in teaching them baking styles that are unique to Cuptails and Dreams.

Today, even though the store has been open for only six months, Francisco can say that she has been reaping the rewards of hard work and of treating right employees whose dedication is matched by their exemplary service.

The couple always sees to it that they improve the quality of the food they serve, the propeller of which are comments and remarks coming from their customers.

Francisco shared with INQUIRER.net that her husband constantly interacts with their regular visitors for insights.

While the meals continue to develop, so do the cuptails. Almost on a monthly basis, Francisco and her team come up with fresh cuptail recipes. This enables the store to keep its frequent visitors always excited and looking forward to something new.

But as to which recipes they will or will not retain, the same rule applies: whichever recipe their customers love stays. The rest that do not make the cut do not completely vanish from their shelves. Instead, they get to appear in the store on occasional basis.

For Francisco, her top priorities remain her product and her people.

In Cuptails’ constant quest for more exciting cupcake recipes, Francisco makes it a point to include her team’s opinions in what new cupcake recipe they will explore next. She does so not just because she thinks this is the best way to keep them enthusiastic but also because she trusts them enough that she could leave them with important decision-making chores.

As a result, she is able to promote a harmonious relationship among her crew, allowing for a pleasant work environment.

At first, it would definitely attract curious onlookers as alcoholic cupcakes are something one does not encounter on a regular basis. But once you get to digest the implication of eating something alcoholic, you might probably get the same sentiment as one Cuptails visitor felt, “I’m scared.”

But contrary to popular belief, cuptails do not really have that much of a “kick” says Francisco.

“Adult cupcake” is how best to describe cuptails because once you grab a bite, that’s when the difference between a normal cupcake and a cuptail kicks in.

The Lemon Bomb for example – a mix of Lemon, Lemon Curd, and Vodka – may be sour on the first taste but it will want to make you take another bite, another bite and another.

The Screaming O, chocolatey in color, cools the palate with its smooth flavour. Baked with Bailey and Kahlua, the Screaming O screams of sinful weekend parties and nothing else.

Eating each and every “cuptail” not only is a refreshing gastronomic experience but an “art of eating cupcakes, redefined.”