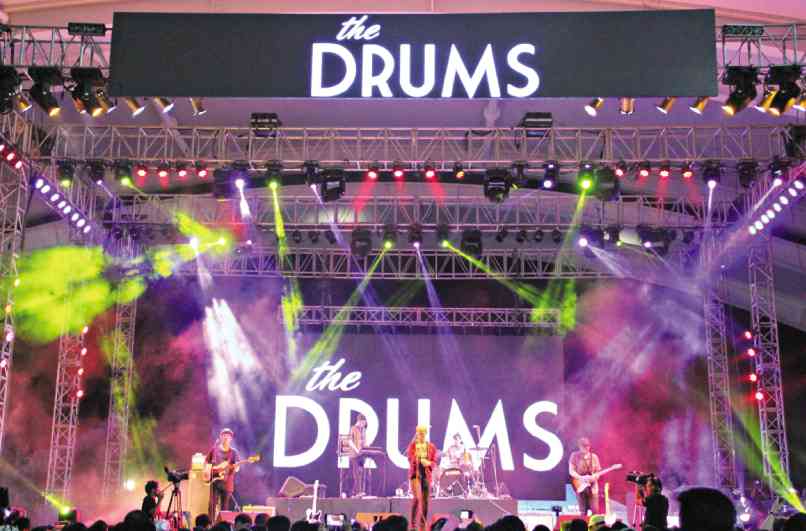 ONSTAGE with The Drums

Faulty sound aside, ‘Wanderland’ was great

Last year, the Wanderland Music and Arts Festival featured a lineup of bands that Filipinos saw for the first time—The Temper Trap, Nada Surf and Neon Trees, along with other emerging international and homegrown acts.

This year’s edition of the fest, held May 17 also at the Globe Circuit Events ground in Makati City, had the following bands: The Drums, The Royal Concept, Architecture in Helsinki, Last Dinosaurs, The Paper Kites, Lucy Rose, Woody Pitney, plus a number of local artists.

The carnival theme was perfect for the open-air venue. There were game booths, a fully-operational carousel, an air-conditioned Wonderlounge, a merchandise and signing tent, art installations and painting sessions, and a wide choice of food and drinks—much more than last year’s.

Chocolate Grass opened the show, followed by Brisom. Electro-pop trio Techy Romantics was next, before the first foreign act for the day, Melbourne-based Woody Pitney, who delighted the audience with a contemporary brand of folk and country with his six-piece band.

Unfortunately, the sound system suffered from technical kinks—which affected The Ransom Collective’s set. But the kids, whose musical style is reminiscent of Of Monsters and Men and Avalanche City, pulled through.

Franco’s songs, which exuded a Rastafarian vibe, had fans inching close to the stage.

It took some time to fix the bad sound mix.

By the time Lucy Rose went onstage, a large crowd had filled the festival grounds. The British singer-songwriter played tracks from her home-recorded indie folk debut album “Like I Used To,” channeling melancholy in “Shiver.”

Last Dinosaurs, performing in Manila for the second time, was warmly received as it played “Zoom” and “Honolulu,” as well as a cover of The Strokes’ “What Ever Happened?” With its heavy, eclectic music, the band’s set was a sign of more interesting sounds to come.

Alas, technical problems cropped up again before The Royal Concept was allowed to play. The alternative pop group from Sweden has been compared to Phoenix due to the similarity in Larson and Thomas Mars’ vocals, as well as the danceable character of their songs. This was most evident in “D-D-Dance,” which got people d-d-dancing and even s-s-singing in unison.

The band enhanced the concert’s festive mood with “World on Fire,” induced torch-lighting drama to “In the End,” and made the women in the crowd scream for more in “Girls Girls Girls,” before concluding its set with “On Our Way.”

Architecture in Helsinki, formed in 2000, was a spectacle. Clad in bright, color-coordinated outfits inspired by the cover art of its new album, the band painted the stage with the mirth and youthful spirit that resonated through its music: “Escapee,” “W.O.W,” and “Contact High” from 2011’s “Moment Bends”; “In the Future,” “I Might Survive” and “Dream a Little Crazy” from 2014’s “Now + 4EVA.”

The fest headliner, The Drums, was born out of shared musical passion, cultivated talent, and do-it-yourself music production. Founders Jonny Pierce and Jacob Graham are lifelong pals whose solid musical connection has prompted them to write and record songs that led to international success.

The band, officially formed in 2009, released an EP the same year and a full-length self-titled album in 2010. Guitarist Adam Kessler left in 2010, leaving Pierce, Graham and drummer Connor Hanwick, but instead of just losing it, they switched instruments and wrote songs for yet another album.

The result was 2011’s “Portamento.” Album number three has reportedly been finished, and should be released this year.

Starting off with “What You Were,” the band’s’ 15-song set was a mix of tracks from its two albums. Things warmed up into the second song, “Best Friend”; each time Pierce mumbled something into the mic and introduce the next song, kids would just go auto-screaming.

The “Portamento” album was a slight shift in the band’s sound, from surf-pop in its debut release, to more synth-based arrangements, since Graham had passed guitar duties to Hanwick and now plays fingers keyboards.

Its music has been compared to that of a few ’80s bands. “I Need a Doctor” and “If He Likes It Let Him Do It” are as close to The Cure and Joy Division, respectively.

From the crowd’s wild response, however, anyone could tell that “Money,” “Days” and the band’s debut single, “Let’s Go Surfing” were the obvious favorites.

The band bid the audience farewell after playing the much-loved single.

For its encore, The Drums capped the night with “Down By the Water” and “The Future.”

If not for the faulty sound system, Wanderland 2014 would have been close to perfection. But at the end of the day, that flaw no longer mattered.

We left the venue with wobbly knees and tired feet but with smiles of satisfaction, bringing home memories of quite possibly the most wonderful musical experience we’ve had so far this year.