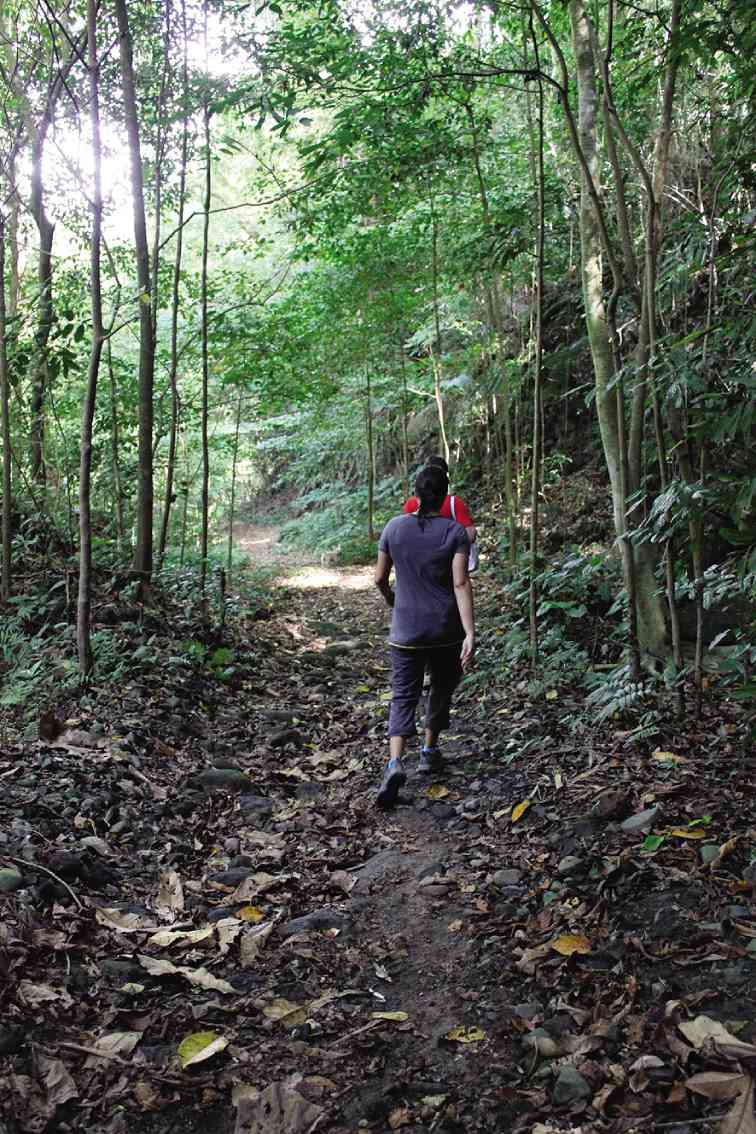 THE CANOPY of trees eases the hike up Mt. Makiling. Inexperienced hikers are advised not to rush since there are rocky and slippery areas. The dormant volcano, believed to be protected by the mythical Maria Makiling, has plenty of hot springs and mud springs. PHOTOS BY KATRINA A. HOLIGORES

With busy schedules and the lack of long weekends, day trips out of the metro are becoming more and more appealing.

It is said to be more fun in the Philippines, but this is dependent on how “zen” or creative you can get when you’re stuck in parking-lot like roads en route to your chosen destination. My friends and I found ourselves in this kind of situation one Saturday as we drove to Laguna for a climb up Mt. Makiling.

Leaving Manila at (what we thought) was a reasonable time in the morning, we found ourselves in miserable bumper-to-bumper traffic as we went through the towns leading up to the Los Baños campus of the University of the Philippines (UP).

To add insult to injury, different areas of an already narrow two-lane thoroughfare was reduced to almost one, with repairs blocking off an entire section. Still we pressed on, determined to reach our destination in high spirits and leave the rather toxic state of traffic behind.

When we finally reached UP, it took some asking around for directions to get to the Department of Forestry which marked the beginning of the trail. After paying an entrance fee of P10 each, we made our way into the Mt. Makiling Forest Reserve, which was declared an Asean Heritage Park in 2013.

Even if the path ahead looked promising, with lots of trees and plants lining the way in the near distance, one eyesore was the cemented half road that was being built right smack on the trail.

Glancing at the obligatory DPWH sign establishing how much the project cost and its completion date, I thought to myself, if only they spent all those millions of pesos on better facilities, say, a decent changing and washing area for hikers going up and down—rather than the dingy toilet that still used the tabo system for flushing. 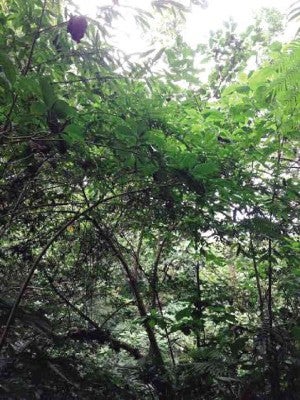 Mt. Makiling is a place of interest both in fact and in folklore.

It is a dormant volcano 1,090 meters (3,580 feet) above sea level. It has had no recorded eruption, but its geothermal features produce the mud and hot springs that can be found on it.

Legend has it that the forest nymph known as Maria Makiling is believed to be protecting the mountain and still makes a mystical appearance every now and then. One story that I still remember from childhood is how she would “fall in love” with various mortal men, keeping them wandering for days, even years around the mountain, never finding their way out. I thought twice about sharing this with my male companions and decided against it, seeing that they probably would just roll their eyes in my direction anyway.

The beginning of the trail (with us doing our best to walk on the ground rather than the cement) was a steady uphill climb. We started our hike close to noon, normally considered the worst time to start, but due to all the trees and a natural breeze, the walk was quite easy. Needless to say, most of the conversation revolved around how long it took to get there from Manila and wondering about alternative routes getting into Los Baños.

Upon research, there are two entrances into the mountain, this one (Peak 2), and the other, a more difficult climb starting from Brgy. San Miguel in Sto. Tomas Batangas, known as the Maktrav trail. Peak 2 takes about four to five hours to get to the summit, while the more precarious Maktrav, six to seven hours.

We passed a sign pointing to the Mud Springs and decided we would visit it on our way back down. I wish I could say I was clever enough to name the various trees, plants and flowers that greeted us, wishing that the Department of Forestry would just label them for me, although mahogany and kapok (silk trees) were familiar sights. 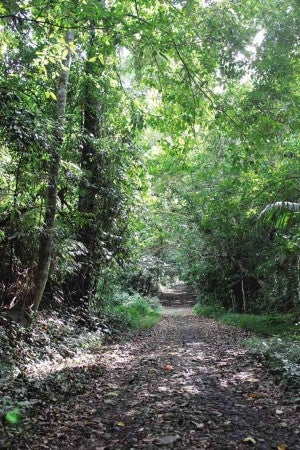 About half an hour to an hour’s walk, one could encounter stores selling fresh buko juice (from local vendors) as well as water and snacks.

I’m not an expert climber and I’m pretty sure we would have gone from station to station much quicker had the strength of my legs matched those of my more athletic companions. But it was not a difficult trail, although certain areas could get rocky and quite slippery.

So, my advice for the inexperienced hiker is to not rush; you can take your time and rest below the shade of the trees. I had been warned prior to my climb about leeches and mosquitoes; we were fortunate enough not to have encountered them. But it wasn’t rainy season yet, so climbers from June onwards should take extra precaution.

In a little over two hours we reached Station 18, and the climb started to become   more challenging due to rockier terrain. But was certainly more picturesque.

Unfortunately, I suffered a wardrobe malfunction by way of the sole of my hiking shoe almost coming off. It had slowed me down for most of the climb, compromising my balance and mobility. My boyfriend was resourceful enough to secure it with my laces, but he was concerned that pressing on might mean it coming off completely, which would make me more susceptible to injury. I was torn—pride wanted me to continue and not be the weekend wet blanket, but safety eventually won out.

Mt. Makiling has three peaks, and Peak 2, being the highest, would have been Station 30. This was the first time any of us had   gone this far up the mountain, so we prudently decided it would be better to start   our descent with plenty of light to spare.

Besides, we still wanted to check out the Mud Spring, not knowing that it would be closed by the time we got back down. We all commiserated for a bit, saying that in the future, the climb would be better planned, with an earlier start, and schedule permitting, avoiding going up on what seemed a busy weekend.

Mt. Makiling remains an underrated and   underappreciated eco-treasure, a somber climb that one may use as a moving meditation. Perhaps Maria Makiling should use her seductive powers once more to draw people into its densely canopied charms.