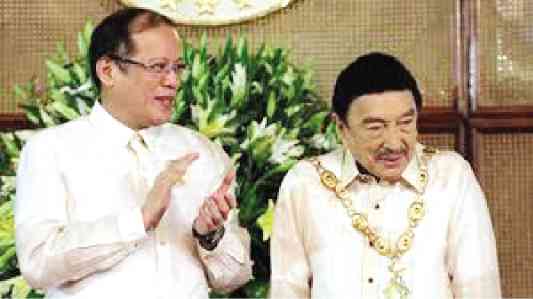 PRESIDENT Aquino giving Dolphy the Grand Collar of the Order of the Golden Heart in 2010. The late actor has been nominated for a posthumous National Artist Award.

With Independence Day set to be celebrated this week, many in the arts and culture establishment are wondering why there has been no proclamation yet by Malacañang of the new National Artists who had been elected last year by the Cultural Center of the Philippines and National Commission for Culture and the Arts.

In the past, the proclamation  was made around Independence Day. There is hue and cry on the Internet about the delay.

The final NCCA and CCP recommendations were transmitted to the Office of the President last October. Several months later, no official proclamation has been made.

The delay has especially riled the  Nora Aunor for National Artist Movement (Nanam), which has circulated a petition asking the President to proclaim the elected National Artists this year:

“It has been eight months since Malacañang received the official and formal endorsement by the (NCCA and CCP) of six new National Artists for confirmation, proclamation, and conferment by President Benigno Aquino.

“While the Malacañang Honors Committee found the nominees worthy to be proclaimed, the petitioners are wondering why it is taking the President six months (and counting) to decide whether to proclaim (them) or not.”

Nanam reveals elected new National Artists by the CCP-NCCA board are Alice Reyes for Dance, Francisco Feliciano for Music, Cirilo Bautista for Literature, Nora Villamayor (Nora Aunor) for Film and Broadcast Arts,  the late Jose Ma. Zaragoza for Architecture, and Francisco Coching for the Visual Arts.

Namam says it is making the CCP-NCCA choices public for the sake of transparency.

Netizens have criticized the delay.

Says film critic Mauro Feria Tumbocon Jr.: “There seems to be a pattern to this sitting president:  slow to act, parang walang urgency. He is slow in reacting to typhoons and earthquakes, and how do we expect him to understand why we need National Artists? He just doesn’t have any insight on why the cultural sector finds it important and significant to proclaim new National Artists.”

“Culture has always taken a back seat in any administration’s priorities,” says teacher Jane Likha Yatco. “The NCCA should have been elevated to Cabinet level a long time ago. I made it compulsory for my students last year to study and report on our National Artists. In the beginning, zero level of knowledge; show-biz names lahat ang ibinigay. It changed when they studied Edith Tiempo, F. Sionil Jose, Nick Joaquin et al. PNoy, according to his literature teacher, had been a mediocre student, but he has this chance to rise above his and his family’s past.”

President Aquino belongs to a clan that does not have a special regard for arts and culture.

In 1990, the President’s mother, Corazon Aquino, who was president at that time, made headlines for the Malacañang screening of the cinematic embarrassment “Pido Dida,” the debut movie of her daughter Kris Aquino.

Last year, President Aquino III made it to the front page as special guest in the premiere night of “My Little Bossings,” again starring Kris  and her son, another artistic embarrassment and mindless movie.

To be fair, it was President Corazon  Aquino who gave pianist Cecile Licad the Presidential Medal for Excellence.

Nanam urges the President to make the proclamation soon.

“We believe that you want your platform of governance, Daang Matuwid, to be manifest as well in the arts,” the movement says, “What better way to affirm this than to give the artistic community and  Filipino nation a new set of National Artists for our adulation and celebration? We need this inspiration in these uninspiring times.”