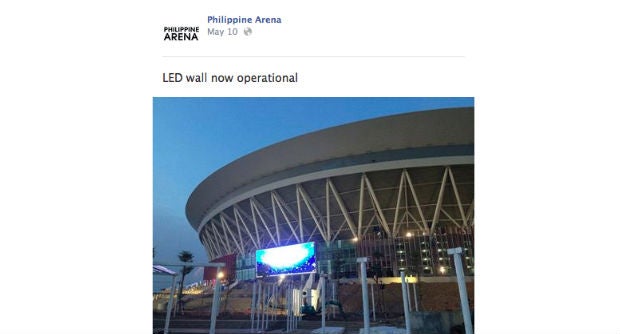 According to South Korean media reports, a Hanwha E&C statement posted on its website on June 9 disclosed that the $175-million or about P7.65-billion indoor arena—built on a 74,000-square meter tract of land in Bulacan province—was completed last May 30, or after 30 months of work.

Philippine Arena has a seating capacity of 51,000, and boasts of a 35,948-square meter roof, which is also said to be the largest worldwide.

The Chosun Ilbo website quoted Hanwha E&C chief executive Lee Keun Po as saying that “[t]he dome arena, which requires a high level of expertise, will boost our efforts to enter the construction and civil engineering markets in Southeast Asia.”

Established in 1962, Hanwha E&C has become a global engineering and construction firm through its forays in the Americas, Africa, Russia, Saudi Arabia and Southeast Asia, its website said. It is a subsidiary of South Korean conglomerate Hanwha Group, which is also into chemicals, life insurance, industrial machinery and technology systems manufacturing, as well as leisure and food services.

Philippine Arena is being prepped to serve as a highlight of the Iglesia ni Cristo’s celebration of its centennial anniversary on July 27.