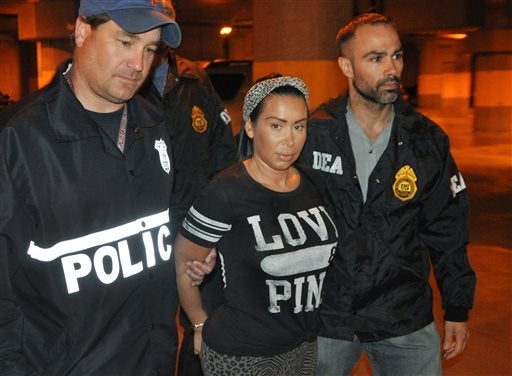 In this Monday, June 9, 2014 photo provided by the Drug Enforcement Administration, Samantha Barbash, center, is escorted by law enforcement officers following her arrest in New York. Barbash is allegedly part of a crew of New York City strippers who scammed wealthy men by drugging them and running up extravagant bills at topless clubs while they were in a daze, according to authorities. AP PHOTO

NEW YORK — A crew of New York City women who worked as strippers scammed wealthy men by spiking their drinks with illegal synthetic drugs, then driving them to strip clubs that ran up tens of thousands of dollars on their credit cards while they were too dazed to stop it, authorities said Wednesday.

The four victims lost at least $200,000. None was identified by name in court papers.

US Drug Enforcement Administration and New York Police Department investigators arrested four women — all described as professional strippers — earlier this week on charges including grand larceny, assault and forgery, according to papers provided to The Associated Press.

One of the women was expected to appear in court in Manhattan on Wednesday following appearances Tuesday by the other three, including suspected ringleader Samantha Barbash.

An undercover investigation found that the women joined in a scheme to rip off the men by drugging them with the stimulant methylone or other drugs after arranging to meet them at upscale bars in New York and Long Island, authorities said.

The impaired victims were driven to strip clubs, where they were charged for private rooms, expensive meals, drinks and other services, they said.

The clubs paid the women for the visits, but the establishments were not facing criminal charges, authorities said.

The men reported waking up in their cars or in hotel rooms with little or no memory of the encounters. Those who tried to dispute the strip club bills received texts from the strippers threatening to go public with their transgressions, authorities said.

Pole Dancing: Not Just for Strippers