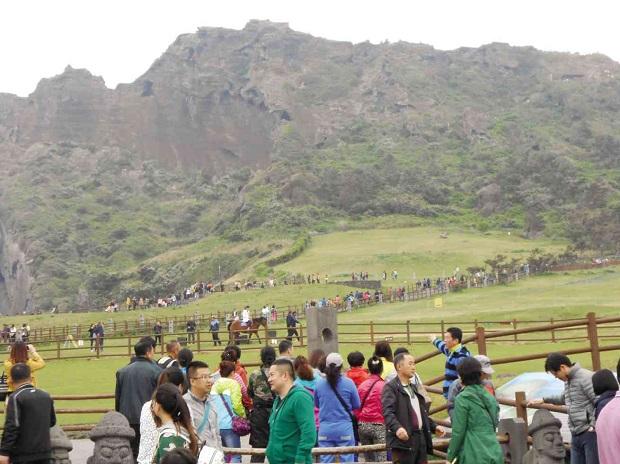 One of the favorite destinations is the 182-meter-high Seongsan Ilchulbong or Sunrise Peak, a Unesco World Heritage Site in Jeju Special Autonomous Province in South Korea. POCHOLO CONCEPCION

MANILA, Philippines—While Korean tourists continue to “invade” the Philippines, there is a growing wave of Filipinos choosing South Korea as their holiday destination.

The Filipinos’ long-standing love affair with Korean culture is translating to a first-hand experience of the land of Koreanovela film actor Lee Min-ho and girl group 2NE1.

A number of visitors from the Philippines are flying to South Korea every year, according to Korea’s Consul-General in Manila.

Min Kyong-ho, Minister and Consul-General at the South Korean Embassy in Manila, said an estimated 400,000 Filipinos traveled to South Korea in 2013, an increase of 20 percent from 2012 figures. This despite caution last year over traveling to the Korean Peninsula last year over Pyongyang’s threat of a nuclear strike against Seoul.

Such growth reciprocates the steady inflow of Korean tourists visiting the Philippines over the years, remaining the top contributor to annual tourist arrivals here. With current figures, one Filipino flies to South Korea for every three Koreans who travel to the Philippines.

Korean tourist arrivals in the Philippines was at 1.16 million in 2013, an increase of 13 percent from the previous year and accounting for a quarter of the total 4.68 million foreign tourists who visited the country last year, per figures of the Department of Tourism.

“There’s been a lot of increase. I don’t think they (Filipino tourists) were affected by the North Koreans… It’s a dramatic increase both ways,” Min told the Philippine Daily Inquirer in a recent interview.

He attributed the increase to the natural affinity between the two cultures.

“You know the emotions, the basic feelings are shared. We have common elements in our culture. We are in the Asian region, and we have some similarities in the cultural aspects, that’s the main thing,” Min said, when asked why he thought many Filipinos were hooked on Korean pop culture.

“Korean dramas are well received here, because in our culture, it’s the same [with the Philippines], we put great importance on family values. The family is the center of our life. And the same here. So many stories are based on family events… And besides, the actors and actresses are very pretty,” said the minister with a chuckle.

He shared how surprised he was during 2NE1’s recent concert in the Philippines, when he heard Filipino fans singing along with the girl group’s songs—in Korean.

And Seoul is paying attention to the Filipinos’ travel interest, with the Embassy devising ways for Philippine citizens to acquire visas more easily, Min.

Just last month, the Korean Tourism Office (KTO) and Embassy in Manila signed a memorandum of understanding with the Bank of the Philippine Islands allowing BPI Gold and Platinum credit card holders to present their credit statement in lieu of a detailed personal bank certificate in their visa application requirements.

Applicants must still, however, present all the other regular requirements such as the accomplished application form, their passport with at least six months validity, certificate of employment, and Income Tax Return, among others.

“Filipinos can get visas more easily than before. These members (BPI Gold and Platinum card hold members) don’t have to provide, submit complicated bank documents. They can just provide their credit card statement. One page of credit card statement is enough for them to get a visa,” said Min.

The Embassy and KTO have been looking to forge similar arrangements with other Philippine banks to bring the easier application method to more travelers, Min said.

“There is still a chance of expanding this scheme to other banks, but we need to agree on that with the banks. It’s a very interesting MOU. I think it will stimulate the tourism industry. More and more Filipino people will visit Korea by easily getting visas,” the minister said.