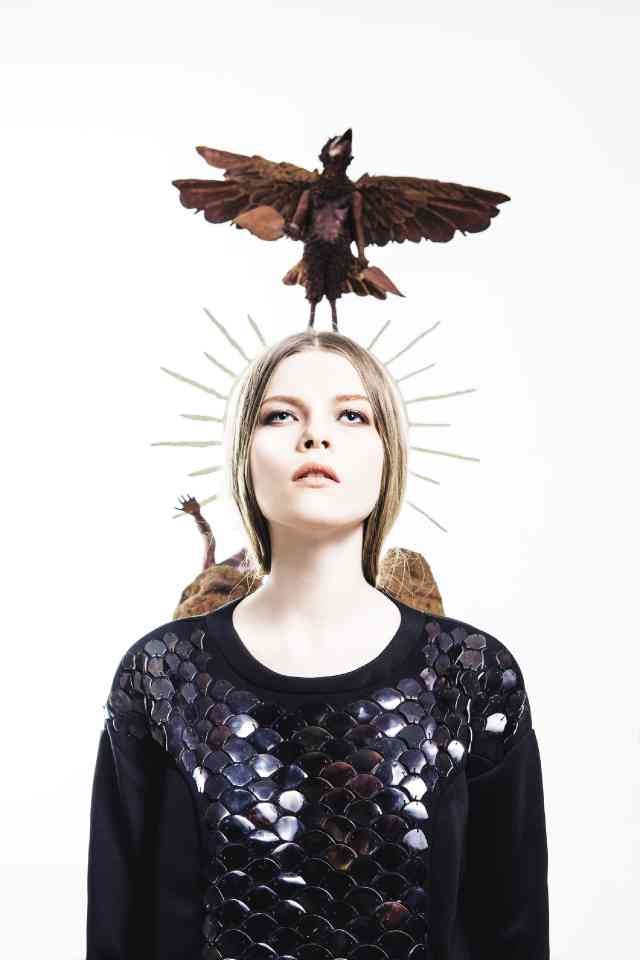 She is listed in Vogue magazine’s “11 Designers You Need to Know,”  style.com, and Barneys department store’s “The New Guard.”

In a technology-driven world, her self-named T-shirts are making the public more aware of the allure created with a needle, thread and skilled hands.

“I wanted to merge our traditional embroidery and ethnic patterns with something young and sporty. I didn’t want to make something serious. There has to be a youthful touch in my designs. While a lot of my work involves old people—artisans and craftsmen who have been doing this for years—I still want to establish the collaboration with a young designer,”  said Ocampo.

For the past two years, Ocampo has been shuttling between New York and the Philippines to produce the T-shirts.

She works with weavers from Baguio, embroiderers and sewers from Laguna and Iloilo, an artisan from Cebu, and tribes people from Davao.

The designer was in Manila last month to launch her Fall-Winter collection, which showcases the embroidery skills of nuns from Iloilo.

In a chat with Lifestyle, Ocampo talked about the realities of producing her line in Asia while doing business in New York.

It was just a generation ago when this writer interviewed Ocampo’s father, designer-entrepreneur Ricardo “Ricco” Ocampo, then 25, about  his handpainted T-shirts with their exuberant take on Pinoy pop culture.

Father and daughter have drawn inspiration from the local culture and captured the zeitgeist of their time.

The younger Ocampo is pragmatic, while Ricco marketed his brand with an optimistic outlook.

“I wish I had my father’s optimism,” she said. “He’s great with people. It’s hard for me to communicate my designs. The people I work with are spread across the country. This makes it difficult to get every single element right in the design.  Nothing comes out the way I planned it. The way we were taught in school in New York is different from the way they work here. I have to adjust to a lot of things.”

Ocampo was born and raised in the Philippines in an atmosphere of fashion.

Her mother, Tina Maristela, a model-turned-accessories designer, influenced her aesthetics. Her father continually exposed her to trends.

She studied high school in New York and pursued her degree in Design and Management at Parsons School of Design, thinking she would end up in  fashion journalism.

She recalled being an overtaxed but underpaid assistant to stylists and editors in Vogue magazine and the New York Times Style section.

“I learned about hard work and attention to detail. There’s a lot of thought that goes into creating beautiful images,” she said. These values have shaped her work ethic.

Once, while on a Christmas holiday, she worked on a T-shirt collection for a school project. Her parents introduced her to their pool of craftsmen, among them an artisan who produced traditional barong Tagalog embroidery.

After shopping for the T-shirt fabrics in Hong Kong with her father, Ocampo created her first collection of  appliquéd barong patterns on T-shirts.

“I wanted to change the way we see our national costumes. I appliquéd on top of the silk barong,” she said. The traditional florid patterns looked cool and modern against bold-colored fabrics.

When Tina presented her  Celestina accessories at their New York showroom, the younger Ocampo brought in her 15-piece collection.

They stood out for vibrant colors and the quirky blend of using traditional and modern elements.

During the presentation, the T-shirts made an impression on a writer. Although Ocampo felt her talent was raw, the press was impressed with the innovations.

The next day, buyers came to look at Ocampo’s debut collection.  When Barneys placed an order, she realized that her T-shirt business was no longer child’s play.

“Buyers thought the T-shirts were unique. In America, designers usually start out with a T-shirt line because it’s the easiest. The T-shirt is all about the fit and the comfort level, like James Perse. T-shirts are worn when we’re lazy to dress up and we want to be comfortable,” the young designer explained.

“Most designers do silk screen technique and, at the most, embellish the T-shirt. No one went as  far doing something different. I try to change the way we see the T-shirt,” she added.

Aside from the contradiction of the old and new, Ocampo uses contrasting materials such as formal duchesse satin, cashmere, silk and casual cotton.

For the interview, she wore a  T-shirt with an urban vibe—army green mesh with an embroidered mockingbird sewn in  Iloilo.

To maintain the T-shirt silhouette, Ocampo uses high-quality cotton for the backing and sleeves from Japan. “I don’t want people to think they are tops. I still want them to look like T-shirts,” she clarified.

For the second Betina collection, Ocampo appropriated the embroidered baroque patterns on the robes of religious icons. “I used embroidery with fillers, like what they use on the Santo Niño’s robe. The designs were inspired by the saints’ costumes. I worked with embroiderers from Laguna. Since there is not very high demand for their work, I want to spark some appreciation for their talent. ”

Meanwhile, from the tribes of Davao, discs of mother-of-pearl (the inner shell layer) are individually stitched to form geometric shapes on the T-shirts.

“I thought it was interesting to include cracked shell which the T’boli use for beads. The striped pattern was something new because they’ve never done it before. ”

Her most salable collection to date was inspired by a trip to Thailand.

Combining printed silks and linen sourced there with combed cotton, the T-shirts were hand-stitched by workers from the Easter Weaving Room in Baguio, which is famous for weaving geometric patterns typical in the Cordilleras.

Ocampo also collaborated with an artisan from Cebu, who made necklaces from knotting and sewing recycled T-shirts.

“I introduced the T-shirt that came with an accessory. The necklace was attached to the neckline. When you wear my T-shirts, there’s no need to accessorize. I love to style. I just like to slip on something that’s easy and will look good,” she said.

For the Betina Fall-Winter collection, nature became the muse after Ocampo read the book “Natural Curiosities.” An all-white collection was inspired by the albinos—animals that are extremely pale due to a birth disorder.  Betina’s shirts fuse lace with handmade necklaces from recycled T-shirts.

Another collection has bugs embroidered by nuns from Iloilo. The  eyes of these bugs are highlighted by crystal or beadwork. Ocampo pointed out that her T-shirts aren’t just flat surfaces.

“There’s a three-dimension effect. First is the T-shirt; the second dimension is the embroidery and appliqué patterns, and the third is the beadwork on top of the patterns. Each shirt goes through a lot of people.  It takes two weeks to make one.”

Another capsule collection highlights beaded fonts sewn on rich material.  “I work with graphic designers who put rap lyrics against classical paintings. That’s a cool combination of classic and youth culture,” she said.

Betina T-shirts are now sold in more than 15 establishments in America and Asia, and the market is still growing.