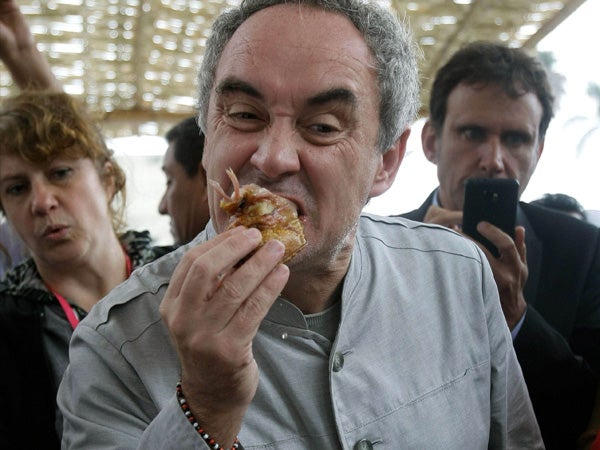 NEW YORK — If you snicker at the foams, edible papers and other hallmark foods of haute cuisine, you may want to reconsider.

Avant garde chef Ferran Adria says that without those, there would be no Rachael Ray, no Food Network, and eating in general would be a lot less exciting.

“We wouldn’t have food television shows if we didn’t have high-end cuisine,” said Adria, who prefers that term to the more popular “molecular gastronomy” or “modernist cuisine” sometimes used to describe his approach to cooking.

Adria, who is from Spain, has become a superstar in the food world for his boundary-pushing cuisine, challenging conventional notions of what it means to cook and spawning a generation of like-minded chefs.

High-end cuisine may confuse or even amuse people, but its cultural significance is huge, he said during an interview at the New York City Wine and Food Festival. He likens it to fashion and music.

“If you ask people, ‘Do you like jazz or commercial pop, 99 percent would say commercial pop,” he said. “But where does contemporary music come from?”

High-end cuisine has pushed the discussion of food into the mainstream, creating excitement about what people eat, he says. And that has created the almost food-obsessive environment that has fostered the growth of food television and other media.

The impact of high-end cuisine also is difficult to predict, he said, explaining that it will take at least 20 years before we can take stock of its influence.

What we recognize today as avant garde cuisine began around 1994, he said. “Only now are we perceiving what it generated.”

But don’t go looking for a trickle-down of sophisticated or unusual techniques. There are some, but its most lasting impression so far has been attitude, he said.

“The problem is high-end cuisine has this sophistication and complexity that makes it difficult for the average person to reproduce,” he said. “It has influenced interest and attitude more than in techniques, tools or ingredients.”

Adria is perhaps best known for his restaurant elBulli in Roses, Spain. Known for its hours-long meals with dozens of courses, it has been the subject of several documentaries and books. Adria closed it in July so he could launch a foundation to focus on researching high-end cuisine.