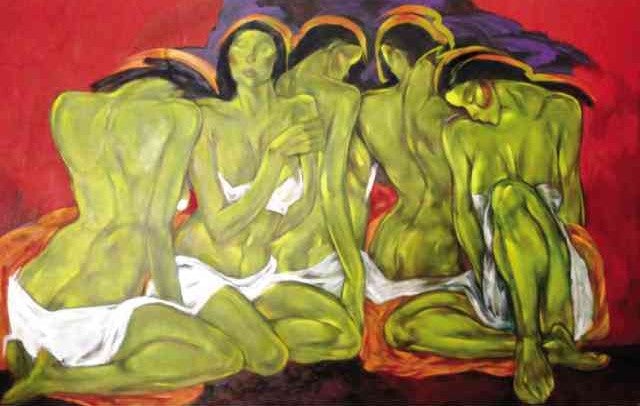 A clear indication of the wealth of Filipino artistry is the impressive number of artistic families where the artistic gene is shared and passed on to the next generation.

While often, it is a patriarch, exemplified by the renowned Mauro Malang Santos, who is the founding father of an artistic “dynasty,” now there is the rare instance of a matriarch inspiring her own brood of artists. This is the case of noted artist Lydia Velasco, who’s popularly known for her distinct renditions of Filipino women.

In a show titled “Mindscape,” Galerie Anna presents the recent works of Lydia, together with those of her daughters Chigoe, Rosario and Xeryk Velasco. Also included in the exhibit are works by Daisy Carlos, Lydia’s sister.

The technique applied by Chigoe is called “decalcomania,” defined as “the art or process of transferring pictures and designs from specially prepared paper.” It is, however, more popularly known as decal or “stick-ons.”

Chigoe’s medium is old wood, with its own unique, nature-weathered texture and touch. She intensifies its raw expressiveness by nailing down metallic studs and rivets. For her transferred images, the artist prefers Renaissance and Old World paintings, thereby contrasting the past with the present.

Using resin fiberglass, Rosario or “Chie”  arrests gestures in midmotion and freezes them into solid reality. Her male model was a construction worker, which she molded with plaster and presented as though he were emerging from a wall.

More interestingly, Chie has done a sculptural portrait of her mother, caught in a meditative mood, typical of Lydia’s absorbed stance when working on her painting.

In sleek and scrupulously crafted three-dimensional geometric works, Xeryk  creates casements, windows and alcoves that serve as stages and frames for his allegories on man’s universal anxieties.

One work, “Repression of Frisolance” is a performative narrative that utilizes choreography and scenic design as well as mime and dramaturgy. The smooth finish of the works contrasts with the turbulent emotion of the encased human figures. Even the fragments of body parts, usually from antique santo, are hand prints of violence and tragedy.

The maidens of Daisy Carlos seem to have leaped off the pages of fairy tale books or medieval narratives where damsels in distress revel in their own fragility and delicacy.

Garbed in long flowing gowns and the sheerest fabric, their alabaster skin as transparent as the sun rays that reflect the glowing tints of flowers enshrouding them, these women, with their masses of hair cascading down their shoulders, are deliberately theatrical. Every movement is punctuated by a sweep of the hand and held in a pose for the adulation of an audience.

They are romanticized fantasies that serve as antidotes to the grim and gloom of present-day existence.

In the distinctive muscular physiognomy of her women, Lydia  presents her “Catharsis” series that are the artist’s own responsive chords to the turmoils of life.

Her gestures are more stylized, dance-like even, tension-filled, a balancing act between grace and aggression. Her black-and-white works in charcoal and acrylics are large-scale sketches that show a relaxed and spontaneous side of the artist.

Ever prolific, the artist, whose works are sought-after by collectors, continues to create an impressive assembly of Filipino women dignified by strength of will, a frank sensuality and unbending fortitude in the face of trials and adversities.