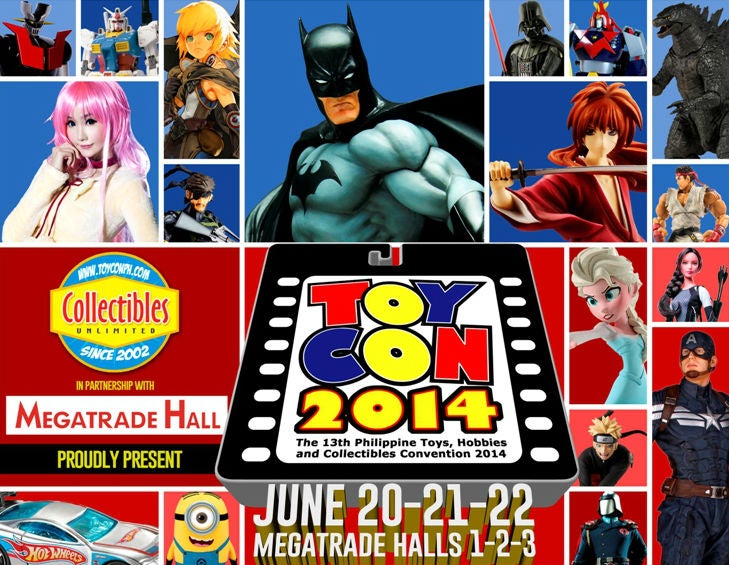 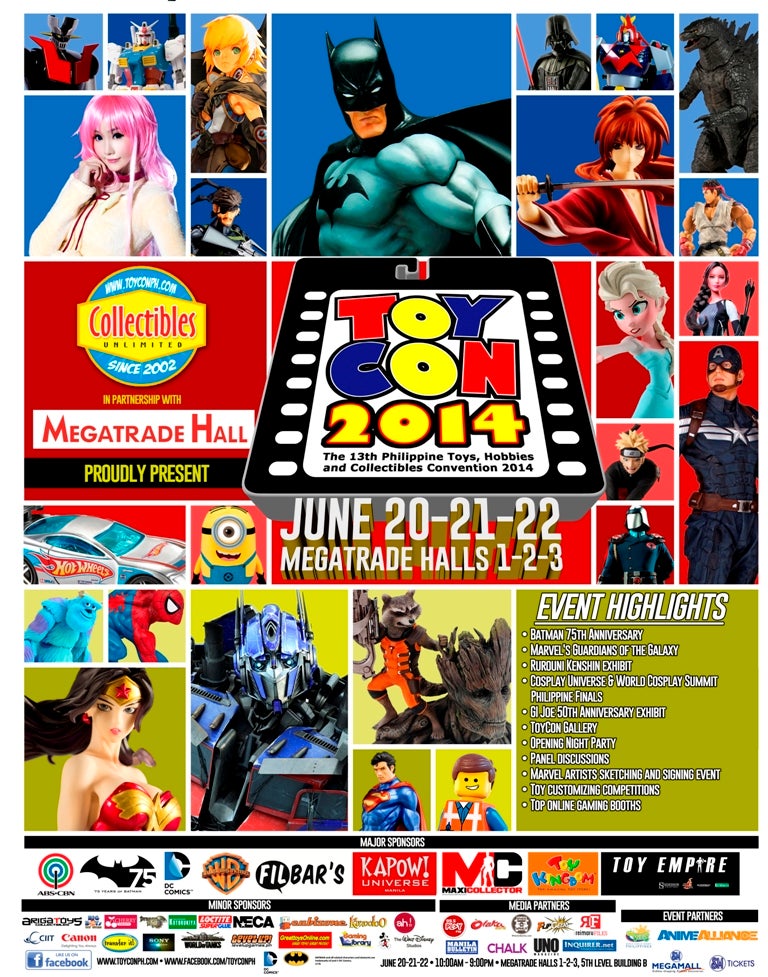 There’s nothing that can compare with bigness. But sometimes, even the thought of “bigness” is an understatement when you find something that can contain all these things and add in a huge dose of fun and thrills. Prepare for the biggest one yet! It’s time for TOYCON 2014!

The Philippine Toys, Hobbies and Collectibles Convention, or TOYCON as it is more widely-known, is Asia’s biggest and longest running convention for collectibles, toys, anime, comics, cosplay, gaming and anything and everything related to hobbies and collections. The convention that started in 2002 is now on its 13th year of thrilling fans and aficionados alike.  It is, simply put, the biggest pop culture event in the country.

This year’s TOYCON will highlight the 75th Anniversary of DC Comics’ caped Crusader, Batman with a huge Batman display area, a life-size Batpod, an activity area for kids, exciting new Batman merchandise, and a gallery of art and collectibles of the Dark Knight Detective.

Get ready to be blown into space with Marvel’s latest epic movie, The Guardians of the Galaxy, with awesome displays, sneak peeks at the movie’s trailers and behind-the-scenes, special fan activities, and the Marvel roster of superstar artists like Leinil Yu, Carlo Pagulayan, Stephen Segovia, Roy Allan Martinez and Kim Jacinto.

The TOYCON also gives you the biggest gathering of toy collections with the following prominent toy exhibits:

Fans of A Galaxy Far, Far Away unite with the 10th Anniversary of the Star Wars 501st Philippine Outpost. Enjoy a parade of your favorite Star Wars characters, Stormtroopers, Jedi Knights and droids and, of course, the Dark Lord of the Sith himself, Darth Vader as they invade the Philippine ToyCon stage.

The TOYCON also features the biggest Cosplay with the Philippine Finals of the World Cosplay Summit happening at the event and TOYCON’s own Cosplay Universe unleashes a barrage of individual and group cosplayers led by Asia’s Cosplay queen, Alodia Gosiengfiao.

Gaming takes center stage also at the TOYCON with the biggest game companies, like Level-Up, War Gaming, Cherry Credits and Uplink releasing the latest versions of their top games.

And off course, TOYCON would not be complete without the biggest exhibitor floor of all pop culture merchandise in terms of apparel, collectibles and memorabilia, graphic novels and comics, cosplay paraphernalia, and toys, toys, TOYS!

Tickets are now on sale at SM Tickets (www.smtickets.com). For more information on schedule of activities and event details please visit: