‘Kleptomaniacs’ and the promise of the first rap musical | Inquirer Lifestyle ❮ ❯ 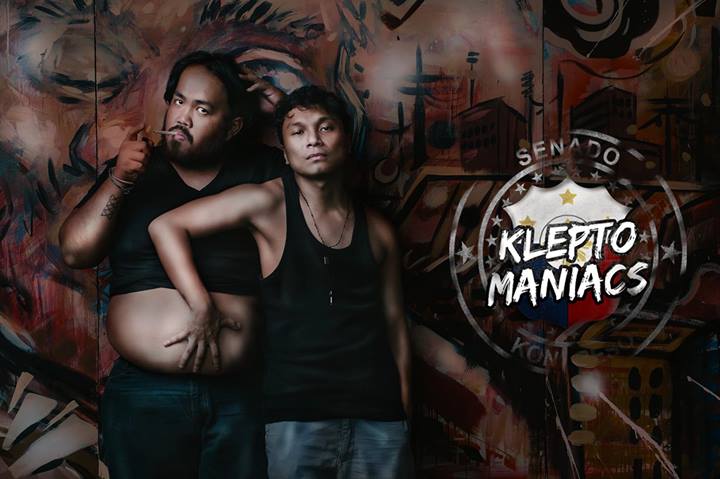 Acting at its finest with Jonathan Tadioan and Nicco Manalo. CONTRIBUTED PHOTO/Tanghalang Pilipino

‘Kleptomaniacs’ and the promise of the first rap musical

New and unique. Distinctly Pinoy and wonderfully contemporary. Rap and fliptop, local hiphop and everything in between.

The promise that Layeta Bucoy’s “Kleptomaniacs” makes is one that is about its daring.

This is a rap musical that does not flinch. All songs are in the form of the rap song, all dialogue happen like a flip-top battle. Taking from local hip-hop culture, the dance and movement that are part of this story’s telling is distinctly of the present, even as it refuses to fall into the trap of foreign mimicry.

The narrative makes sure this production has its feet so deeply rooted in the ground, where the importance of its message is one that’s not thrown in your face, or is forced down your throat. Instead the surface is enough to enthrall you with simplicity: this is a community that struggles every day and lives to tell the tale. This is a world where government is but a shadow that people live against, and without.

This is the story of the simpleton that is Tabo, who finds hope in love, and finds reason in the midst of ruin. This is about Tabo’s world crumbling before him, and his decision to rise to the occasion as unlikely hero.

“Kleptomaniacs” is about this world where people don’t only speak of resilience, they actually consciously live it. They do not depend on government, because they are its mere pawns. They struggle every day, and find that they survive.

In this world, kleptomania is the reason for hunger and want. It is the inexplicable violence of corruption in government that creates this community in dire need. 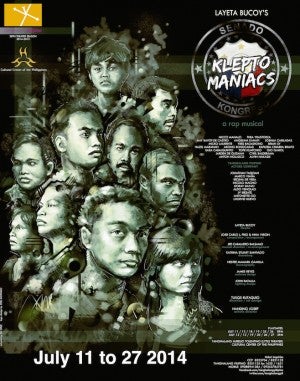 Working with local hiphop culture’s roots in speaking out against oppression and creating a community, and inspired by the songs of Gloc-9 and its ability to critically engage with issues that are important and relevant, Kleptomaniacs is the story of our common and current struggle against the need and hunger that corruption breeds.

We all suffer in the hands of Kleptomaniacs. This is our story.

Leading the cast are Nicco Manalo and Thea Yrastorza with Tanghalang Pilipino Actors’ Company. Veterans May Bayot-De Castro, Miles Kanapi and Jonathan Tadioan take on the roles of community elders.

“Kleptomaniacs” runs until July 27, at the Tanghalang Aurelio Tolentino of the Cultural Center of the Philippines.