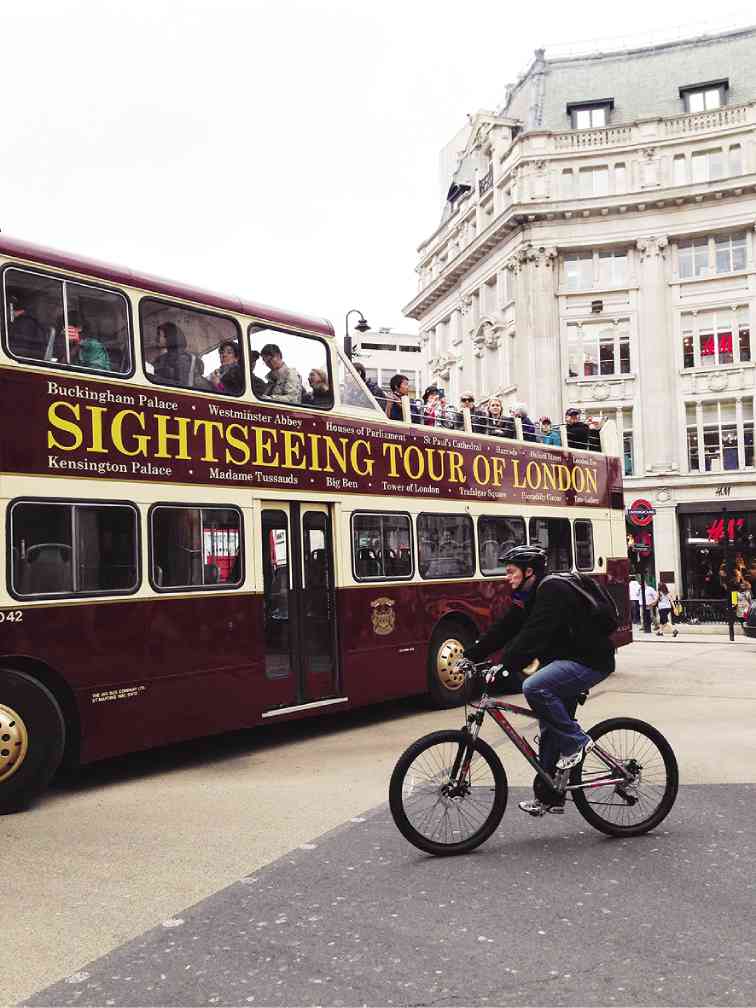 DOUBLE decker bus tours are fun but there is so much more to London than just the usual sights.

A pop-culture junkie’s guide to London

There is so much more to London than the changing of the guards, the London Eye and the Big Ben. It’s a playground for pop-culture fans. Here’s a guide to 11 of your different obsessions.

If Harry Potter has you under his spell …

Join a Muggle Tour, a walking tour that will take you to key locations from the Harry Potter films and to places that inspired J.K. Rowling to create her wizard world. Our guide Steph Black (who claims to be Sirius Black and Bellatrix Lestrange’s niece) met us near the London Bridge tube station and spent almost two and a half hours taking us to the entrance of the Leaky Cauldron, the places that inspired Knockturn and Diagon Alleys, the bridges the members of the Order of the Phoenix flew over on the way to Grimmauld Place, the entrance to the Ministry of Magic and more (www.muggletours.co.uk; £12 for adults, £10 for kids 11 and under).

Have your photo taken at Platform 9 ¾ (King’s Cross Station). Scarves are readily available to make you look like a Hogwarts-bound wizard. There’s usually a line but it’s worth the wait if you are a big Harry Potter fan. The souvenir shop is also worth a visit but get your wallet ready. It sells all kinds of treats— wands and Hogwarts uniforms, owls and chocolate frogs.

Go on the Warner Bros. Studio Tour and explore the sets and see the costumes and props that were used in the Harry Potter films. End your visit with a mug of foamy butterbeer. The studios are located 20 miles outside of London but can easily be reached via train, bus or your own car. Tickets are not sold at the studios, they must be purchased through their website (www.wbstudiotour.co.uk). Book your tickets early—no amount of wingardium leviosa can produce them once they’re sold out.

If ‘Doctor Who’ is your thing …

The Who Shop is a must-stop. It’s both a store and a museum, displaying 120 different props and costumes from the show and selling apparel, action figures, toys and gadgets. (The Who Shop, 39-41 Barking Road, Upton Park; www.thewhoshop.com; entrance fee to the museum is £3 for adults and £2 for children under 16).

Join the Doctor Who Walking Tour and let a Whovian expert take you to 15 different Doctor Who locations in two and a half hours. (britmovietours.com/bookings/doctor-who-london-tour; £12 for adults and £10 for kids under 12). You can also go for a three-hour Doctor Who VIP tour and be taken to locations in a private car (britmovietours.com/bookings/doctor-who-vip-tour-of-london; £330 for one to five persons).

If you’re still a Beatlemaniac deep in your heart …

Go on a London Beatles Walk with Richard Potter, a huge Beatles fan who wrote the book “Guide To The Beatles London” and who runs the Beatles Coffee Shop near Abbey Road. There are three tours offered—In My Life, which will take you to important places in Beatles history; Magical Mystery Tour, which gives you a chance to imagine The Beatles in the swinging ’60s; or The Rock and Roll London Walk which also covers other musical icons including The Rolling Stones, Oasis, David Bowie, The Who, Jimi Hendrix (www.beatlesinlondon.com; £9 per person, £7 for full-time students and people over 65, free for children under 15 if accompanied by an adult). Private tours can also be arranged for £130 per group.

Visit Abbey Road Studios where the Beatles recorded almost all of its albums and singles, and take your own Abbey Road crossing photo (3 Abbey Road).

If you want to see the original lyrics of “Imagine” handwritten by John Lennon, stop by Hard Rock Café (150 Old Park LaneLondon W1K 1QZ). His jacket and glasses are also on display there.

If you have time to spare, travel to Liverpool where the Beatles grew up. Visit the childhood homes of John Lennon and Paul McCartney, see Strawberry Field and experience The Beatles Story (Albert Dock, Britannia Vaults, Albert Dock, Liverpool, L3 4AD; www.beatlesstory.com), a museum dedicated to the Fab Four.

If Jack the Ripper intrigues you …

Go on a Jack the Ripper Tour. There are several competing companies that offer similar tours but we signed up for the Jack the Ripper Tour—The Original London Terror Walk (www.jack-the-ripper-tour.com; £9 per person). Their guides are considered Jack the Ripper experts, have appeared on the Discovery Channel, and have written nine books about the case. The tour, which retraces the steps of the unidentified serial killer who wreaked terror in the impoverished Whitechapel district of London, wasn’t as creepy as we imagined—it was even occasionally funny because of our guide Philip Hutchinson’s antics. We were with a big group of Australians that included a fearless little girl who wanted to see a photo of Jack the Ripper’s most mutilated victim. Her mother didn’t let her.

Join the Camden Rock ’n’ Roll Walking Tour. DJ Alison Wise will guide you through the area’s rich musical history and pay tribute to big names in British music including The Rolling Stones, The Beatles, Pink Floyd, The Clash, Joy Division, The Smiths, Blur, Oasis, Amy Winehouse and more. Pub stops included (rocknrollcamden.blogspot.com; £10 per person, you must be at least 18 to join).

If you’ve devoured everything Roald Dahl has written …

If you have a few hours, travel to Great Missenden (it’s only 45 minutes away via British rail from the Marylebone tube stop). Explore the village where Roald spent over 30 years of his life and visit The Roald Dahl Museum and Story Centre, a fascinating stop for both kids and adults. Learn more about Roald’s childhood and life in the military, see Johnny Depp’s Willy Wonka costume from the film “Charlie and the Chocolate Factory” and check out Roald’s writing hut where he wrote most of his popular children’s stories (81-83 High St, Great Missenden, Buckinghamshire HP16 0AL; www.roalddahl.com/museum; £6.60 for adults, £4.40 for kids from 5 to 18, for students, people with disabilities and those over 60 and free for kids under 5). Roald Dahl’s grave is also a short walk away from the museum.

If Sherlock Holmes is your man …

Look for the bronze Sherlock Holmes statue near the museum.

Have a pint and a Sherlock-inspired meal at The Sherlock Holmes pub where you will find Sherlock memorabilia and another replica of his study (10-11 Northumberland St, Westminster).

If you fell in love with Hugh Grant in ‘Notting Hill’ …

Take a picture of Will Thacker’s blue apartment door (280 Westbourne Park Road, Notting Hill). It isn’t the original door though—that one had been auctioned off at Christie’s in 1999. You wouldn’t find Will’s travel bookstore on Portobello Road but you can still take a picture of the location—it is now a souvenir shop called Notting Hill (142 Portobello Road). Other notable locations include: Portobello Road Market, the home of Bella and Max (91 Lansdowne Road), the garden Anna and William break into (Rosmead Gardens, Rosmead Road), the hotel where William pretended to be a journalist from Horse and Hound (The Ritz Hotel, 150 Piccadilly) and the venue of the press conference proposal (The Savoy Hotel, 1 Savoy Hill on the Strand).

If you ‘Wannabe’ a Spice Girl …

If you’re as gutsy as the girls, pose for pictures at the grand staircase of the St. Pancras Renaissance Hotel (Euston Road) where Sporty, Scary, Baby, Ginger and Posh shot their “Wannabe” video.

Walk in her shoes. Go to Bridget’s neighborhood in the film adaptation, grab a bite at Borough Market where Bridget bought ingredients for her disastrous birthday dinner (the scallops are delicious), take pictures of the exterior of her flat (above The Globe Tavern, 8 Bedale Street, Borough Market) and relive Mark Darcy and Daniel Cleaver’s fight. Remember how they crashed through the window of a Greek restaurant? The resto is now a wine merchant called Bedales (5 Bedale Street, Borough Market).

The London Film Museum will also have the biggest collection of original James Bond vehicles on display for the rest of the year (45 Wellington Street, Covent Garden, London WC2E 7BN; londonfilmmuseum.com/tickets; £14.50 for adults, £9.50 for kids from 5 to 15, students and people over 65 and free for kids under 5).

Grab a martini (maybe the Fleming 89) at Dukes Bar (35 St. James’s Place), Bond author Ian Fleming’s favorite bar, and the place that is said to have inspired the line “shaken, not stirred.”