Memories haunt me from Manila to Catanduanes | Lifestyle.INQ ❮ ❯ 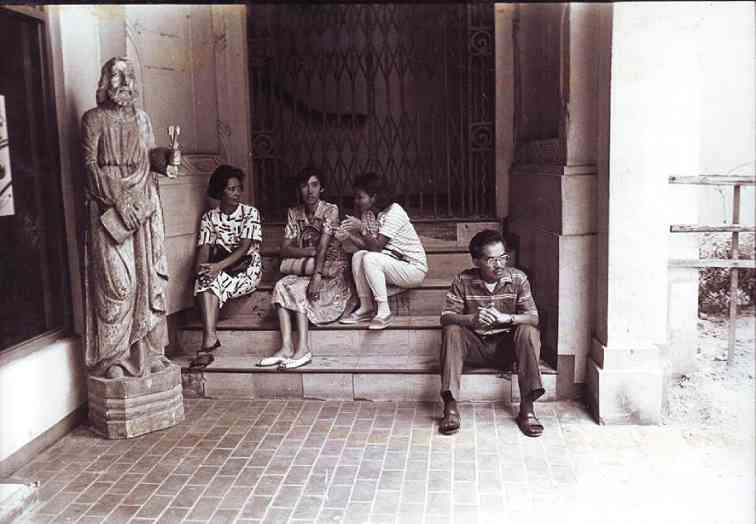 Memories haunt me from Manila to Catanduanes

At 65, I’m susceptible to nostalgia. It comes anytime in my workaday world, like when riding the MRT-LRT trains from my Pasig home to various offices to claim my contributor’s checks.

The LRT’s Doroteo José Station is where I get a view of the horrible transformation of Manila Grand Opera House, now a downtown hotel. From the station, you see the pool area where a karaoke session is ongoing.

I don’t know what to make of music history while wailing and squawking foreigners hit the high notes, as I remember the eminent artists who performed in what used to be the country’s first theater of the performing arts.

Russia’s grand diva of dance, Anna Pavlova, danced in that theater in the 1920s. The first concert of the Manila Symphony Orchestra also took place in that theater on Jan. 22, 1926.

The Filipino diva, Maestra Mercedes Matias Santiago, sang “La Sonnambula” in that theater, too, with President Manuel Quezon in the audience. The opera was interrupted by a long brownout. When power resumed, the opera ended at close to 3 a.m., but the audience stayed.

Onward to the LRT Central Station, you see a fast-deteriorating Manila Metropolitan Theater (founded in 1931). The leading Filipino artists of the 1930s performed in that theater, from violin virtuoso Ernesto Vallejo to the first Filipino to sing “Madama Butterfly,” Isang Tapales; to the legend that was Italy’s grand diva, Amelita Galli-Curci; the violin greats Jascha Heifetz and Fritz Kreisler; and the icon of modern dance, Ted Shawn.

I debuted as impresario in this theater with the concert of Romanian diva Nelly Miricioiu, with the Manila Symphony Orchestra, in August 1984.

One of the most gratifying voice recitals I experienced in that theater was Spanish diva Montserrat Caballe, with Lorenzo Palomo on the piano. In the audience were two bickering future National Artists for Film and Theater: Lino Brocka and Rolando Tinio. They quarreled over the latter’s low regard for the former’s film “Inay.”

Brocka, who was seated beside me with George Reyes, threatened to dump cones of ice cream on the head of Tinio, who was with wife Ella Luansing. I was able to pacify Brocka, whose attention was diverted by the Spanish diva, telling me, “Pablo, parang ibon ang boses niya.”

But his euphoria was cut short when La Caballe sang “Dahil Sa ’Yo” for an encore, dedicating it to “Doña Imelda.” (On that piece, I heard the most haunting pianissimo of the human voice.)

While the Big City gave me a dose of culture, there is nothing like remembering growing up in my island province, Catanduanes.

My grandson and I recently visited my hometown Baras, passing by Baras Elementary School, where I recited Rizal’s “Mi Ultimo Adios” during the graduation program.

I glimpsed the old house of my godfather Kikoy Tejada and recalled my Ninang Paz’s funeral wake. He remarried somebody with the same name of my ninang, a former neighbor on whose radio set we listened to soap operas in the late ’50s, when a townmate named Roberto Tayam was acknowledged as the town’s answer to Elvis Presley.

My paternal grandmother looms clear in my memory. She used to slip coins onto my palm during trips to the capital town. She had a long bout with tuberculosis. Her favorite ritual consisted of early morning novena capped by a walk by the sea.

The entire town evacuated to higher grounds as we watched the sea rise, fill up the river and recede, exposing the depth of the sea around the islands. It was my first taste of tsunami.

Uncle Ben’s house and what remained of my grandmother’s abode were all witnesses to what was a happy childhood. My late uncle was the pillar of stability in the family. He built a sturdy house, sent his two children to good schools, acquired one of the town’s first radio sets, and taught for decades with Aunt Conching in almost all barrios of my hometown.

Both reported to school by boat in nearby Putsan barrio and in another seaside barangay, where I heard my first Neapolitan song rendered by my uncle. Before I even heard Pavarotti’s version, I thought “O Sole Mio!” was a Bicol song.

In the old days, we fetched drinking water by boat in nearby sitio Lini, crossing a swamp where we used to catch crabs. Cooked with coconut milk and malunggay, this crab recipe I still cook today—an obsession like my craving fresh pili.

The Baras church brings back childhood memories: the entire school required to line up along the road to the town center to meet the bishop; the lead altar guy and the fair-skinned sacristan and their unusual closeness. (That relationship became the subject of my early short story “Prism,” published in pre-martial law Now Magazine, edited by Norma Miraflor.)

I remember my altar-boy days: preparing the well-measured wine for Mass and the proper vestments at 4 a.m.; attending Sunday meetings of the Legion of Mary. I don’t know how I managed to memorize all those Latin texts, prepare the priest’s habiliments for Holy Mass, and still attend my grade school class.

The remaining landmarks brought back more memories. I took one last look at what used to be Farmacia Guerrero (the first pharmacy on the island); the ancestral house of former Vice Mayor Titong Sarmiento, from where emanated strains of Bach and Beethoven before the islanders went crazy over Rico Blanco; the defunct Abundo newsstand where Tia Merly gave me my first glimpse of the country’s dailies and magazines.

Baras was paradise despite typhoons that inevitably taught us how to be strong inside and out. In one of the strongest storms to hit the island in the ’60s, we took refuge in Uncle Ben’s house. It was over 240 kilometers per hour and caused a storm surge that partly submerged my uncle’s house. Aunt Magdalena screamed her head off, thinking that our end was near.

During summers, cousins from both sides of the family reunited, feasting on pancakes and molido while enjoying a seaside view of Minabalay Island.

Most of my cousins coped well with life. A few went abroad, got various jobs, and can now afford instant vacations, inviting other cousins who still share that infectious laughter that has become a trademark of the family.

How your cousins have evolved you can see through their Facebook pages. They quote famous people on the true meaning of life; why forgiveness is better than revenge; why you’re better off ignoring people who look down on you. Facebook reveals some cousins looking lonely as they post photos of loved ones who have moved on.

Watching my cousins reunite on a beach in the capital town as I watched my grandson climb trees and run on the white sand, I realized we could not bring back the good, old days. We pined for the old landmarks, the childhood delicacies we used to enjoy, the soap operas that converted Uncle Ben’s living room into an intimate theater.

We are all survivors of the cycle of typhoons on the island and the other storms that have figured in our lives. Given a choice, I can live simply on this island, surrounded by sea and sky and with just a few things the revenue collectors won’t find taxable.