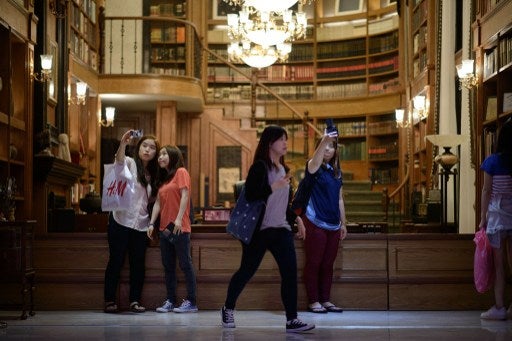 In a photo taken on June 12, 2014 visitors pose for photos before an exhibition featuring the set of popular South Korea television drama 'My Love From a Star' in central Seoul. AFP FILE PHOTO

SEOUL- The export success of South Korea’s TV dramas has spawned a hard-selling world of branded entertainment that uses product placement to push everything from smartphones to lipsticks.

The so-called Hallyu (Korean Wave) of TV shows and pop music has long conquered most of Asia and, in recent years, found new, devoted fans in the Middle East, Latin America and North Africa.

The power of the most popular dramas to launch new trends and boost existing ones was displayed by the recent production “My Love from the Star” — an unlikely love story between a top female movie star and a 400-year-old alien disguised as a human.

The SBS television show was a huge hit, especially in China where it triggered a craze for Korean-style fried chicken and beer, the favoured comfort food of the show’s heroine — played by Gianna Jun.

The main characters talked and sent texts on Samsung’s Galaxy Note smartphones, or chatted via the Line mobile app made by Naver, Seoul’s top Internet portal.

Jun’s character used lotions and lipsticks made by Amorepacific, the South’s largest cosmetics firm. Supporting characters had an insatiable taste for mini-desserts made by CJ — the country’s top food company.

The exposure clearly pays off.

Amorepacific said sales of the skincare products and lipsticks used by Jun surged 75 percent and 400 percent respectively, largely thanks to booming sales in China.

“In the past, PPL (product placement) on South Korean TV shows boosted domestic sales only,” the company said in an e-mail statement to Agence France-Presse.

“But we’ve recently seen it having an immediate and widespread impact in Asia, especially in China,” it said.

More than 90 percent of PPL deals on South Korean soap operas involve domestic firms, but foreign companies are also being attracted by the lure of improved sales in a key regional market.

In “My Love From the Star,” a pair of $625 Jimmy Choo shoes worn by Jun sold out in shoe stores across Asia within days.

Even more dramatically, it only took a rumour — the brand name never appeared — that the lipstick Jun used in one episode was from Yves St Laurent to cause a similar run on that product.

Neither Jimmy Choo nor YSL had even struck a deal to have their products placed in the show.

Mercedes Benz did, and the German carmaker saw sales of its models featured in the show spike.

“Many companies now know if their products are featured in our shows, Asian viewers, especially women, will feel more familiar with their brands — whether on a conscious or unconscious level,” said Kim Yeong-Seop, an executive producer at SBS.

Drama as a commodity

While details of product placement deals are not disclosed, industry sources say exposure on popular shows costs at least 100 million won ($96,000) and much more for a hit drama featuring A-list stars with a regional following.

The biggest spender of all is Samsung — the world’s largest technology firm by revenue — which sponsors around two thirds of all domestically-produced soap operas, according to Kim Si-Hyun, head of 153 Production, a major PPL agency in Seoul.

Commodification of the dramas begins at the earliest stage of production, once a script writer has produced a basic story line listing characters and their professions.

The workplaces that will feature in the show are offered for sale to real companies looking for exposure.

According to Kim from 153 Production, the workplace of a lead character can go for between 500 million and 1.0 billion won.

That was how the female lead in “The Heirs” — a teenage romance that was a huge hit in Asia last year — ended up working for Mango Six.

The Seoul-based cafe chain paid more than 500 million won to feature in the show as the workplace of the heroine — a poor teenager courted by two wealthy classmates who constantly sip Mango Six signature juices while waiting for her.

“We made sure that the most dramatic, romantic scenes — like the two men professing their love for her or fighting over her — take place in our store, with our drinks on the table,” Kang Bong-Joo, the firm’s marketing manager told AFP.

The store in Seoul has become a major tourist attraction and Chinese branches of Mango Six in cities like Shanghai draw customers wanting the same juices drunk by the two male leads.

“It really helped our expansion plans in Asia,” Kang said.

Not everyone is happy, and internet forums devoted to individual shows often carry complaints from regular viewers.

“These days I don’t know if I’m watching a TV drama or a home shopping channel,” one disgruntled fan wrote.

While the placement in some dramas is relatively unobtrusive, in others it can jar glaringly as a character wolfs down half a dozen branded donuts for no apparent reason.

Kim of SBS acknowledged that seamlessly squeezing dozens of products into an hour-long episode was a challenge, but insisted it was a “critical part” of the contemporary TV industry.

With huge fees demanded by a limited pool of A-list actors, production costs have skyrocketed to the point where product placement is no longer just desirable but essential, Kim said.

“We are aware of the potential for a viewer backlash … and we try our best to keep a balance,” he added.