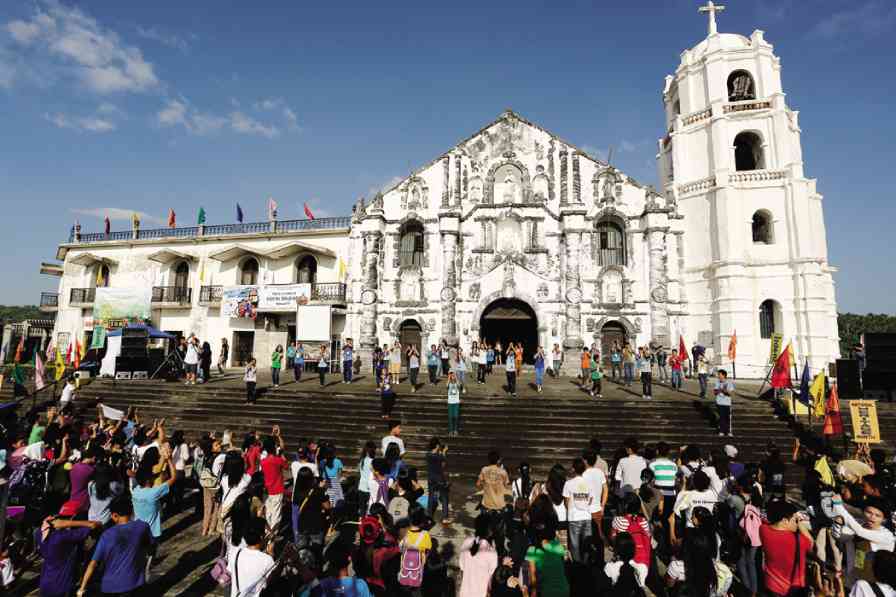 YOUTHS from across the country gather at the centuries-old Daraga Church in Albay to celebrate National Heritage Month 2014. PHOTOS BY PAUL ALLYSON QUIAMBAO

The Angat Kabataan Camp (AKC) marked its fifth year by revisiting Bicol, where its heritage advocacy has produced much fruit.

AKC is a National Heritage Month event. It gathers about a hundred youth leaders from across the country for a heritage camp, which aims to foster appreciation of the country’s cultural heritage among the youth. It was held in 2009 in Cebu and Bohol; 2010 in Albay; 2012 in Iloilo.

This year, AKC went back to Bicol, particularly in Albay and Sorsogon.

Ana Lorilla, who was part of the first camp in Bicol and  now the architect behind the restoration of the Daraga Church, declared a National Cultural Treasure by the National Museum. She said the youth of Daraga after the 2010 camp had since been actively involved in preserving the cultural treasures of the locality. This resulted in the growth of awareness on the need for heritage preservation.

“When the conservation efforts on the Daraga Church began, the people reacted,” said Lorilla.

At first, many people opposed the lime washing applied to the exterior of the historic church, which made the the church, which originally took on the dark color of the volcanic rocks that were used in the structure, look white and consequently concealing the natural color of the ancient stones.

“The lime was to prevent further damage. And we had to constantly explain this to the people,” Lorilla said. “We now have included in the yearly program for our fiesta a seminar on cultural heritage conservation and restoration.”

The lime plasters were supposed to get rid of the vegetation sprouting from the crevices of the old church, which weakened church structure.

In 2013, Lorilla went to Rome to attend the Getty International Stone Conservation Course through the International Centre for the Study of the Preservation and Restoration of Cultural Property.

This year’s participants were from the churches declared as Unesco World Heritage Sites and National Cultural Treasures, and other institutions supporting the cause for heritage conservation.

One of the highlights of this year’s camp was the pilgrimage of the Sto. Niño de Cebu image, considered the oldest religious relic in the Philippines.

According to Fr. Harold Rentoria, OSA, National Commission for Culture and the Arts commissioner and AKC founder, the Sto. Niño image serves as a reminder of every Filipino’s responsibility to protect and preserve the heritage of the country, regardless of age.

“Even young people have both the responsibility and the capacity to conserve our heritage as Filipinos,” Father Rentoria said.

The old image of the Child Jesus was brought to the archipelago by Ferdinand Magellan’s expedition, which landed in Cebu. It was given to Queen Juana, wife of King Humabon, as a gift in 1521. When the Legazpi-Urdaneta Expedition arrived in Cebu in 1565, the image was rediscovered in a nipa hut. This event is now known as the “Kaplag” in Cebu, which will have its 450th anniversary next year, which will also mark the 450th year of the Augustinian presence in the Philippine islands.

The participants also attended a lecture on how they could effectively conserve their cultural heritage in their localities. Participants were urged to start having cultural sites listed in the registry of local governments.

Campers also attended an orientation given by the NCCA on how to apply for grants so they could formulate programs on cultural conservation.

Other talks delivered as part of the camp were “The Image of Sto. Niño, the Augustinians in the Philippines and the Basilica del Sto. Niño” by Fr. Arnel Dizon, OSA; “Restoration Words in San Agustin Church and Museum” by Fr. Ricky Villar, OSA; and “Designing a Conservation Program for Cultural Treasures in the Locality” by Eric Zerrudo of the Center for the Conservation of Cultural Properties in the Tropics of the University of Santo Tomas.

Heritage sites visited by the campers were the Daraga Church and Cagsaua Ruins, both in Albay, and the Barcelona Church in Sorsogon.