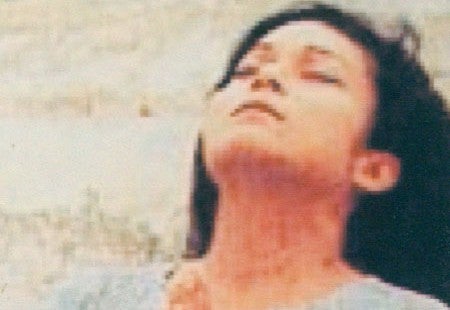 Nora Aunor in a scene in "Himala": "Handling herself with utmost modesty and refinement"

MANILA, Philippines–The National Commission for Culture and the Arts (NCCA) stands by Nora Aunor, but also notes the legality of President Aquino’s decision to exclude the actress from the newest batch of national artists.

The NCCA and the Cultural Center of the Philippines (CCP) also confirmed that aside from the six newly proclaimed national artists, three more will be conferred the honor in a formal ceremony: fictionist Lazaro Francisco, painter Federico Aguilar Alcuaz and filmmaker Manuel Conde.

Santos was part of the 2009 batch, but his name was dropped from the list by Arroyo to make room for the four artists who didn’t go through the process.

In an interview with the Inquirer, Trixie Cruz-Angeles, legal counsel of the NCCA, said: “The three were already proclaimed by President Arroyo. Their conferment only didn’t push through due to the court case in 2009.”

The three are already included in the roster of national artists posted on the government’s official website.

The Supreme Court released its decision in 2013, voiding the inclusion of Caparas, Alvarez, Mañosa and Moreno, and upholding the validity of the three’s proclamation, Angeles recounted.

In a phone interview on Monday, Emily Abrera, chair of the CCP board, said: “The three were robbed of their moment… Finally, they will be formally recognized with the new batch.”

Abrera said Alcuaz died in February 2011 while waiting for the case to be settled.

Filmmaker Jun Urbano, son of Conde, told the Inquirer: “This is good news. My family is thankful and happy. Unfortunately, my mother (Julita Salazar-Urbano) died last year. She was also waiting for this honor.”

Previously, there was confusion when the names of the three didn’t appear on the new list of national artists released by Malacañang on Friday.

In a phone interview on Sunday, National Artist for Literature Bienvenido Lumbera told the Inquirer: “The NCCA should clarify the status of the three.”

NCCA Chair Felipe de Leon Jr. told the Inquirer in a phone interview on Sunday: “In a meeting earlier this month, the CCP, the NCCA and the honors committee of the Office of the President (OP) agreed that the three will be conferred along with the new batch.”

At the same early June meeting, the committee on honors approved the proclamation of Santos and the six new national artists, including Aunor.

Angeles told the Inquirer: “Nora was approved by the honors committee as well. It was an exercise of discretion, on the President’s part, to exclude her.”

Angeles reiterated that the President’s action was legal. “It is true that he doesn’t have to justify his decision,” she said. “But this is not just an issue of legality, but of propriety.”

Malacañang on Monday insisted that Aquino did not commit grave abuse of discretion when he excluded Aunor from his proclamations of new national artists.

The President has the power to approve all or none of the nominees from the CCP and the NCCA, according to presidential spokesman Edwin Lacierda, citing the 2013 Supreme Court ruling.

Besides, the presidential spokesman added, the advice of the CCP and the NCCA was recommendatory.

“It has a persuasive nature but the final prerogative rests with the President,” he said, pointing to the high court’s ruling stating that the President “may remove” but may not add to the list submitted by both bodies.

“So, was there grave abuse of discretion when the name of Ms. Nora Aunor was taken out? No, there was none,” he said at a briefing aired over government radio. “As to the reason for that, I’m not privy to the decision.”

On Sunday, Communications Secretary Herminio Coloma said the President’s choice of national artists was based on “the national interest.”

Angeles stressed that Aunor deserved to be a national artist.

“In the meeting between CCP-NCCA and the OP’s honors committee early this month, questions about Nora’s tax problems and purported drug use were raised. CCP-NCCA clarified that Nora never had a tax evasion case and the drug case in the US was stricken off the record in 2007,” Angeles said.

Morality is not in the present guidelines of choosing a national artist, Angeles said.

According to Angeles, the committee on honors, in confirming the choices of the joint boards of the CCP-NCCA, needed to check two things: “That the process was completed and that the nominee is of ‘good standing.’”

The term “good standing,” like “good moral character,” is subject to interpretation and its definition can evolve with the changes in society, she said.

Aunor was approved by the honors committee based on these two standards, Angeles said.

She said Aunor could be nominated again. “She doesn’t have to go through the entire process from square one because she has already hurdled all the stages.”

Just like Santos, Aunor’s name can be inserted in the next batch of nominees. “Santos’ case set a precedent. A nominee who was dropped by the President can be presented again by the joint board and, if the next President has no objection, can become a national artist.”

Angeles said the NCCA was standing by Aunor. “We stand by all the artists recommended by the joint boards of the NCCA and the CCP to the honors committee, including Nora.”

Angeles pointed out that Aunor went through a rigorous process. “Her works were reviewed by experts, peers and national artists. We recognize Nora’s genius, artistry and contribution to the field and her remarkable body of work.”

The CCP’s Abrera agreed: “I voted for Nora. I supported Nora. I believe she deserves to be national artist.”

Abrera expressed admiration for Aunor, who was very conscientious in making public pronouncements throughout the eight-month-long wait for the proclamation, and even throughout the controversy that resulted from her exclusion.

“Of all the people involved in this issue, she is the one who has handled herself with utmost modesty and refinement. I respect and admire her for that. It breaks my heart that she failed to become a national artist,” Abrera said.–With a report from TJ Burgonio