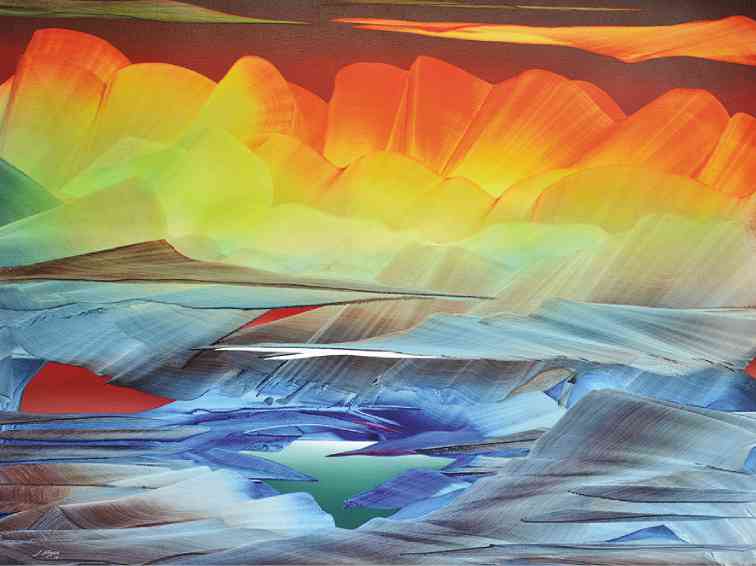 Putting together three artists at the peak of their careers, the exhibition explores the crux of their respective practices.

Both Nuyda and Isidro are pioneers of Philippine abstraction, while De la Cruz stands as one of the most sought-after sculptors of his generation.

Isidro was among the first abstractionists to incorporate indigenous Philippine designs, symbols and motifs in his paintings. His works are relatable and organic, while also highly organized and carefully nuanced.

His take on abstraction is often referred to as kinetic gesturalism, or “active painting,” since the viewer can see the way his hand gestures from the strokes on the canvas in a manner quite similar to National Artist José Joya.

Nuyda’s career spans over 40 years of prolific art-making. His “Mindscape” series is a bellwether in the development in Philippine abstraction.

An amateur naturalist, Nuyda combines his expansive knowledge of butterflies and nature with a visual-art practice that is both geometrically logical yet organic.

His canvases flow with dynamism and energy—a characteristic that suits the temperament of the artist.

The two artists, products of University of Santo Tomas, are stalwarts of an exciting period of late Modernism, between the late 1960s and early ’70s. Both were referenced by art critic Amando Manalo, who wrote of artists who had contributed to the “richness and variety of contemporary Philippine painting at the time, including BenCab, Justin Nuyda, Rodolfo Samonte, Mars Galang and Raul Isidro.”

De la Cruz is of a later batch, graduating with a degree in philosophy from University of the Philippines in 1989.

Following a successful career in product design, he turned to sculpture in which he has made a name for his feminine figures.  This juxtaposition of ideas—female grace against the taciturnity of the metal that depicts it—is the foundation on which he has built his artistic practice.