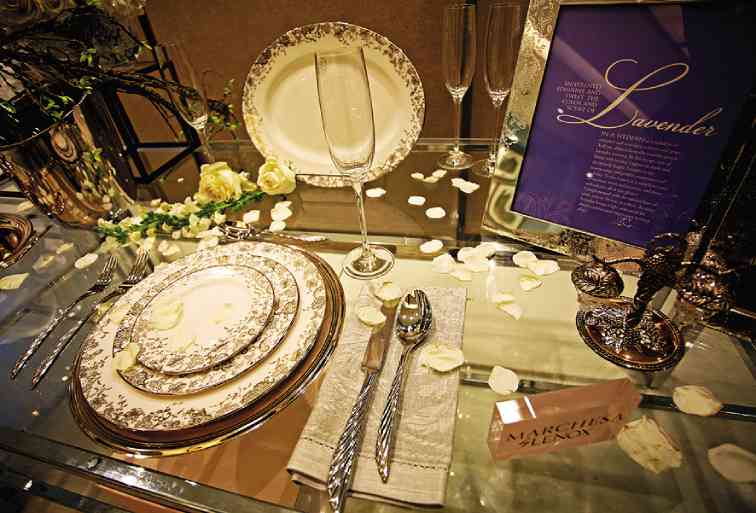 COLLABORATIONS with other designers like Marchesa enrich Lenox’s offerings.

From ‘Reagan red’ motifs to Kate Spade patterns, this china couldn’t be finer

Founded by Walter Scott Lenox in 1889, the brand, which has become synonymous with unrivaled artistry and superior craftsmanship, is now present in 75 countries.

“I don’t know why we didn’t establish our presence here sooner,” said Cameron. “But I think it has a lot to do with timing and finding the right partner.”

Peter Greeley, Lenox international sales and marketing manager for Asia Pacific, believes that the Philippine market will readily warm up to the brand.

“I know American brands are big here,” said Greeley, who’s married to a Filipino. “The Philippines is definitely ready for Lenox. You and I know that the country has moved forward in a very positive way in the last five years.”

The superior quality of its products is already a given. Gold trimmings and design motifs on dishes, for instance, are guaranteed not to fade or come off despite constant use.

“These things do last forever,” said Cameron, referring to items produced by Lenox. “They would outlast all of us. Many customers, in fact, buy Lenox and later pass their sets down to their children.”

When it comes to innovations, Lenox also boasts of being the first to introduce a number of features that eventually became industry standards.

In 1972, for instance, the company was the first to provide the market with freezer-to-oven and microwave-to-table plates, cups, saucers and bowls.

But what truly sets it apart from its competitors is the length and breadth of its designs, which are further enriched through constant collaborations with outsiders.

As a design-driven company, Lenox, on top of its pool of seasoned resident designers, has forged partnerships with guest designers in other fields. The brand currently offers full dinnerware lines designed by Donna Karan, Kate Spade, Aerin Lauder, Scalamandre and Marchesa.

Not only do such partnerships boost Lenox’s design offerings, they enable consumers, in Cameron’s words, “to choose from different aesthetics.”

“We get all kinds of inspirations from our relationships with our guest designers,” said Cameron. “In the case of Kate Spade, we’re dealing not just with one person, but with an entire design team. Their aesthetic is young, hip, cool, bright and cheery.”

And then Lenox also works with someone like Karan, whose New York sensibilities are seen in her sophisticated designs. Those in search of feminine, elegant and bridal-theme pieces also have options in designs done by Marchesa.

While most of its competitors in Europe and Japan can produce only two to three new designs at best, Lenox can easily provide its partner retailers with no less than 14 new designs every season. The world of home accessories has two seasons per year.

“In aggregate, it wouldn’t be uncommon for us to produce 28 new patterns, which we present to retailers,” said Cameron.

Since Lenox makes only the ones retailers pick, the company doesn’t get to execute all of its ideas. But once it proposes a series of designs, it has the capability of producing almost anything a retailer fancies.

And once it manufactures a particular design, that design is kept in the company’s archives. Should there be a demand for it in the future, even if it’s as few as two to four pieces, the company would be willing to accommodate such requests.

“Whether it’s for practical or sentimental reasons, we know how important it is for some families and even businesses to keep their Lenox pieces intact,” said Cameron. “Reproducing them is part of the commitment we made when the customer bought into the patterns.”

Lenox’s origin may be American, but the company’s outlook is global. Its Garden Tapestry line, for instance, has an exotic Eastern flair, thanks to gold-trimmed batik prints on dishes.

Bombay Lace, which was designed by Scalamandre, pays homage to Indian fabric, while architectural details take center stage in the Art Deco-inspired Audrey.

Lenox officials are thus open to the idea of producing a Filipino-theme dinnerware set, even collaborating with a Filipino designer to realize it.

“We would be willing to venture into that, but nothing is definite at the moment,” said Jayson Score, Lenox EVP for strategic business development and supply chain. “If we do, it would be in partnership with Rustan’s.”

Trust begets trust. Lenox’s willingness to explore new ideas by working with other people, especially when it comes to design, didn’t escape the attention of people in the White House.

Since 1918, Lenox has become the unofficial supplier of exclusively designed American-made china to a number of US presidents. To date, it has produced so-called state series for the administrations of such presidents as Franklin Roosevelt, Harry Truman, Ronald Reagan, Bill Clinton and George W. Bush.

It has also done exclusive series for a number of vice presidents, state governors and US embassies the world over. These series, especially those made for the White House, aren’t commercially available.

“There’s no official contract,” said Cameron. “They go to us, usually near the end of an administration, and our designers work with their teams led by the current first lady.”

The outgoing president and his family usually get to keep a set or two of the finished products, either for personal use or to be displayed in his future presidential library. The bulk ends up being used by the incoming administration in the White House.

Over the years, many first ladies and governors’ wives have picked national and state symbols like eagles and state flowers, which were incorporated into the final designs. Some, like Nancy Reagan and Laura Bush, even found ways of injecting their own personalities in their respective state series.

“Nancy Reagan, for instance, was wild about red,” said Cameron. “She often wore red dresses. When she worked with our designers, they ended up with a design that had touches of ‘Reagan red’ on white plates.”

It was a certain shade of green for Laura Bush, and she got her wish with an exclusive collection of dishes that incorporated her favorite color.

“Michelle Obama hasn’t sat down with us yet, but the Obamas are most probably using Laura’s design or an earlier series designed by someone else,” said Cameron. “But we’re currently working on an exclusive collection for Vice President Joe Biden.”