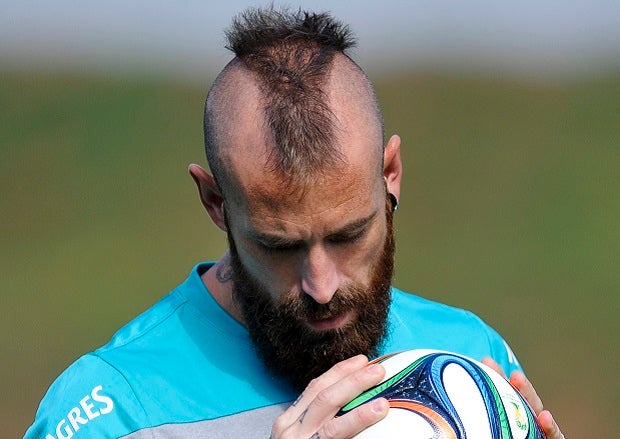 In this June 19, 2014, file photo, Raul Meireles grabs the ball during a training session of Portugal in Campinas, Brazil. Meireles' Mohawk has been compared to the one sported by Robert De Niro in Taxi Driver. His thick beard and all-over body tattoos add to his scary-looking appearance. AP

CUIABA, Brazil — It was an odd place to find three international footballers on the eve of a crucial World Cup game, inside a small hair salon located on the forecourt of a gas station on the outskirts of a remote Brazilian city.

But there they were, Nigeria stars Emmanuel Emenike, Kenneth Omeruo and Ahmed Musa, eager for a new style and color touch-ups for the big match against Bosnia-Herzegovina.

“They are very vain,” said Dirce Cardoso, owner of the Salao de Beleza Aeroporto in southern Cuiaba. “They wanted to be pampered.”

So Cardoso obliged. She canceled her other appointments, closed the salon and gave the footballers the full VIP treatment. Two of them got a Mohican and two of them had their hair dyed black.

Total cost: $71 — and Cardoso was even treated to a ticket for the match.

It seems like we have a new addition to the footballer’s pre-match routine — healthy meal, massage, a few media interviews … and a new haircut.

This World Cup has been a tournament full of goals, surprise results and breath-taking skills, but also some of the wackiest, most outrageous hairstyles you’ll find in sports.

Rat tails, mohicans, dreadlocks, braids, bleached blond, outlandish side-partings, the “Afro” — you name a hairstyle, and at least one player is certain to have had it. And it’s been the talk of Twitter during games.

Footballers appear to be pre-occupied with their hair like never before.

“I found out that my haircut got quite a lot of people talking on social media,” France defender Mathieu Debuchy told The Associated Press, sporting a hairstyle that can best be described as shaved on the sides with of lizard-shaped comb-over/side-parting.

“So much the better if people talk and communicate about it. I feel good this way, I like it and that’s the main thing, no?”

Ever-changing hairstyles used to be domain of David Beckham, who experimented with the shaved head, the cornrows, the Fauxhawk and bleach-blond look, among others, in the blink of an eye. Now everyone is at it, and the styles are getting bolder and bolder.

Take Portugal superstar Cristiano Ronaldo, for example. The world player of the year had a different hairstyle for each of his three games at the World Cup — for the second, against the United States, he had a zig-zag-style engraving in the right side of his head.

Similarly, Ghana striker Asamoah Gyan had a blond No. 3 dyed into the side of his black hair to represent the number of his jersey that had been handed to him by his brother, Baffour.

The mohican is becoming increasingly popular among players and has been best demonstrated at the World Cup by enigmatic Italy striker Mario Balotelli, France midfielder Paul Pogba and Portugal’s Raul Meireles.

In fact, Meireles’ overall appearance has been one of the sights of the tournament, complementing his wacky hair with a bushy beard and tattoos that appear to cover almost all his body.

When Meireles and US midfielder Kyle Beckerman — famous for his messy dreadlocks — collided in a challenge during their teams’ group-stage match, it was more a clash of the haircuts. US Soccer posted on Twitter: “Dreads vs. Mohawk/Beard” with a photo.

A combination of boredom, vanity, football being increasingly fashionable and maybe even the influence of sponsors means that players are becoming more daring with their styles.

“I love that they all have their unique styles,” Cardoso said. “They all are very modern. I wouldn’t choose one over the other.

“This year, everything looks kind of strange. But it’s normal. It’s about being young and different. It’s beautiful.”