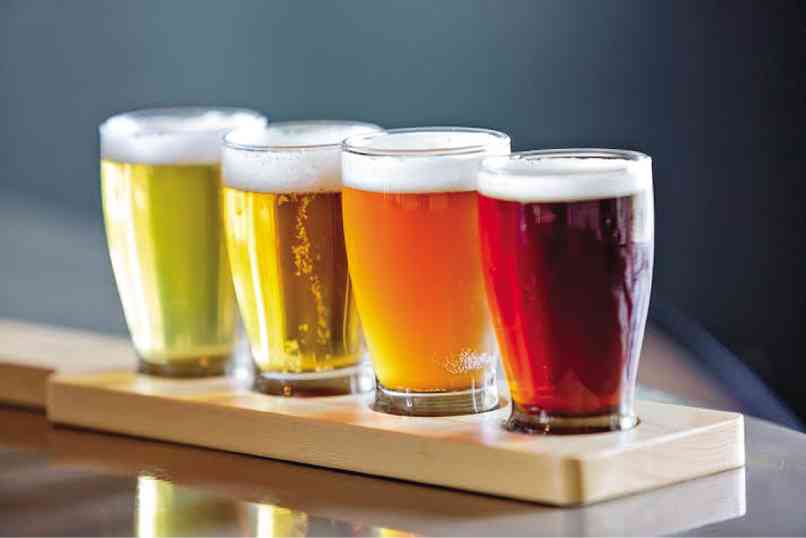 BEER Sampler for P250 is a good way for first-timers to try out craft beers.

Initially I thought the craze for craft beer would only be a fad, but there is no denying that it is fast becoming a permanent offering in many restaurants and pubs.

One of the new pubs is Perfect Pint at BGC in Taguig. It bills itself as a “gastro pub” and is drawing fans of locally brewed beer or craft beer.

The brainchild of the Tempongko brothers Alec, Noel and Raymond, Perfect Pint aims to provide beer-lovers what Noel called a “notch above” experience.

So what is so special about craft beers?

According to Alec, the group’s “master brewer,” craft beers embody the personality of the brewer, which translates to better flavor, giving it an edge over commercial beers.

Craft beers take anywhere from one to two months to brew, starting with fermentation, which takes about 2-4 weeks. Afterward the beer is transferred into a keg for another 10 days for maturation, during which CO2 is pumped in for carbonization. It’s probably a little more complicated than that, but I was too focused on trying out all the beers.

Asked about the “perfect pint,” Alec said beer, like wine, is personal but in general, good beer is based on flavor, clarity, carbonization and, of course, how it is served—the type of glass it is served in as well as the temperature.

While the restaurant offers other beverages, when it comes to beer, it does not carry popular commercial brands, local or foreign. “We want to support local beer manufacturers because we are one of them,” the brothers said.

Regular on tap include Indio Pale Ales and wheat beers such as Pivo Chech Weizen and Katipunan Weizenberg.

The restaurant also has its own brew, which is generally available Friday and weekends.  “Initially we are offering our own IPAs, or Indio Pale Ale, but we also plan to make Weizens and Stouts,” the Tempongkos said.

When it comes to beer, matching the right meal is not as strict as it is with wine. But it does not mean you can just eat anything you want at Perfect Pint.

Chef Gene Gonzales of Café Ysabel was brought in to design a menu specifically for the beers.

The brothers say this concept of food-beer pairing is something they felt was important to achieve the superior and unique experience.

It even has beer pairings for desserts. Fat Pauley’s Amapola Red Velvet Chocolate Ale and Caramel Smores are an ideal pairing.

Care to join the revolution?