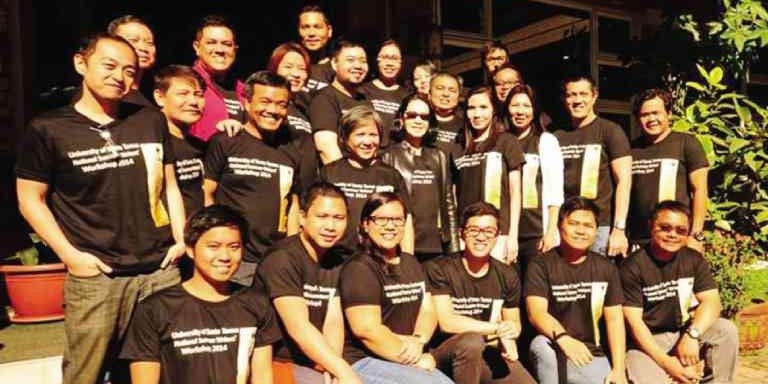 Aspiring writers must remember that more than anything else writing is a social responsibility.

This is the advice given by the panelists to the fellows of the Summer Creative Writing Workshop conducted by the University of Santo Tomas Center for Creative Writing and Literary Studies (CCWLS) held at Ridgewood Residence, Baguio City on May 18-24.

This is first time the workshop was opened to non-Thomasians since its revival three years ago.

Poet Rebecca Añonuevo-Cuñada expressed dismay over the fact that some writers tend to alienate their readers with their writing and likewise urged the fellows to communicate better.

Meanwhile, CCWLS director Cristina Pantoja-Hidalgo, a literary scholar and writer, said that a writer must always speak the truth and be honest.

Honesty. That was one word we heard all the time during the workshop. Probably because as writers it is our duty to communicate our message with much honesty, and all of us fellows could not agree more.

During one of the sessions, Cuñada said that poems should strike a balance between the literal and the metaphorical, adding that metaphor is finding “similarity in dissimilarity.”

She also said if obscurity in poetry is used as a literary device, the poem must be written in a way that it is “clearly ambiguous.”

Fellows were reminded of Paul Engle of the famous Iowa Writers’ Worskshop, who said “poetry is ordinary language raised to the nth power.”

Asked about editorial standards in publishing, Zulueta, who was once the director of the UST Publishing House, said that he always keeps in mind the “canons of taste for journalists,” which state that written works should not commit impropriety or offend the sensibility of the audience or the readers.

Meanwhile, Hidalgo said that the most effective creative nonfiction pieces are those that are able to blend information with human interest. She cited writer John McPhee’s works as good examples.

A creative writing workshop would be complete without the  browbeating from the panelists and all the processes that go with it. We’ve all been made to walk the narrow path and jump into the rough waters of criticism.

These days, writing fellows are lucky to be spared from scathing remarks of old such as “umuwi ka na lang at magtanim ng kamote (go home and just plant a sweet potato).” But that does not mean the panelists went easy on the works of the fellows.

In the end, we must remember what we have come for in the workshop: To listen to our dear mentors with an open mind. The compliments, if we are lucky to have them, at best a pat on the back.

Manansala, who teaches Filipino courses in Miriam College, said that what he liked about the workshop was the presence of critics such as Campomanes and Lopez, who “brought about a more dynamic assessment of the creative work.”

Former US Poet Laureate Billy Collins was able to summarize the workshop in his poem, “Introduction to Poetry,” which was recited by our co-fellow Popoy during the fellowship night:

“But all they want to do / is tie the poem to a chair with rope / and torture a confession out of it. // They begin beating it with a hose / to find out what it really means.”

And after the grueling five-day workshop (and the laughter and tears in between), we were able to finally make sense of it all and find out what it truly means to be a writer.