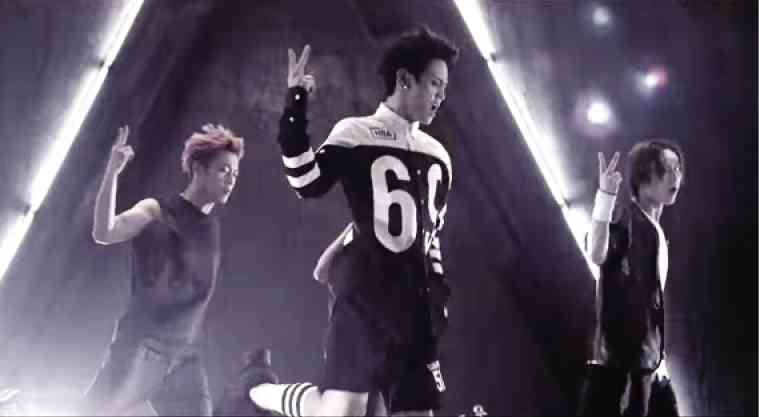 YANG Yoseob, wearing World Cup shirt, and Beast executing what Billboard calls “the most athletic and impressive showing yet from K-pop dance.”

The comeback record of leading Korean pop (K-pop)  boy band Beast, “Good Luck,” is sweeping the Hallyu music charts  for its tuneful   dynamism and  video that has intrigued many for its cross-cultural references.

Written by Yong Junhyung, the rapper of the sestet, and his frequent collaborator Kim Tae Joo, “Good Luck” is a heartbreak song with the refrain addressing the beloved, sending her his bitter best wishes.

Last year, Beast had scored a hit with the gothic “Shadow,” about how a love eclipsed basically casts a pallor on everything.  It was also written by Yong Junhyung, who, fans speculated, was reeling from his breakup with Goo Hara of the girl group Kara.

“The most striking part about  ‘Good Luck’ is its production that pairs classical music elements like dramatic, orchestral strings and piano melodies with soaring synths and fizzy electronic pops,” says Billboard.

The record is also distinguished by the unmistakable vocal dynamics of Beast, perhaps the best-sounding of K-pop boy bands, anchored on the soaring and beautiful vocals of the baby-faced main singer, Yang Yoseob, who got an anointing of sorts last September when he was asked to do a duet by the Grammy-winning classical superstar, the soprano Jo Sumi (who performed to a sellout crowd in Manila last February), and was featured by the New York Time for headlining the Seoul production of Andrew Lloyd Webber’s “Joseph and the Technicolor Dreamcoat.”

On it, the Korean sextet isn’t afraid to take the next step toward shedding its boy-next-door image altogether and going for a darker, more mature vibe.

(Last year, Beast went for a darker video for “Shadow,” setting it in a post-apocalyptic age with nuclear  fallout all over, complete with hairy tarantulas and gold-plated snakes. “Shadow” was  named Best Music Video of the Year)

The boys wish their ex-girlfriends good luck, and each of them go through different routes in doing so. I particularly like Yoon Doo-joon’s scene where, after seemingly deep in thought as he watches over the girl while she sleeps, he casually slides her left foot into her other pair of black heels and covers her with a white blanket.

As far as symbolism goes, it shows that he is at peace with the fact that she will be moving on to another man and he even helps her on her journey by making sure that she is well-protected when she wakes up.

Yang Yoseob, wearing mournful black but looking crushed and innocent, then belts out the lines, “Why, why you leave me alone baby/ I’m still loving you/ Right now you’re leaving me behind but/ I wish you happiness.”

This is when you realize  this is a dance track, not a Beast ballad. As the group dances out the rest of the video, scenes of what happens to the other members are shown, including rapper Yong Jun-hyung getting stabbed with a knife by his Judas ex-girlfriend at a “Last Supper”  setting.

I wasn’t too crazy for the Vegas imagery,  but it does drive home  the point that getting into romantic relationships is akin to taking a risk at winning the jackpot in the casino, or losing one’s shirt and  heart.

The song itself is bookended nicely by synths and strings and is perhaps a way of telling  fans that this is a classic track definitive of the band’s symbolic transition to grittier musical story-telling territory.

The grittiness is balanced by the dancing, which shows the sestet executing highly frenetic and muscular but well-coordinated whirls and loops. On the music video, they’re dressed in highly stylized, sports-inspired outfits, with Yang Yoseob in football goalkeeper’s attire and shorts, a clear reference to the frenzy of the World Cup.

“It may be the soccer-player socks half the members wear in the dance sequences,” comments Billboard, “but Beast’s ‘Good Luck’ choreography feels like the most athletic and impressive showing yet from K-pop dance this year. The sextet jump, slide and twirl around video sets to seamlessly pull off the high-cardio moves.”

Oh, but some netizens notice Yoseob is wearing a sports shirt with the number 69. Again, it seems that Beast is pushing the envelope, but most fans aren’t complaining or have chosen to ignore it if only to retain the illusion that Yoseob and the Beast are their boys, forever.

The critic of the K-pop Break website has complained not about the sexual innuendo of the number, but the fact Yoseob is made to wear high socks: “Yo Seob already looks 12 and then you put these Little League socks on him. Really?”